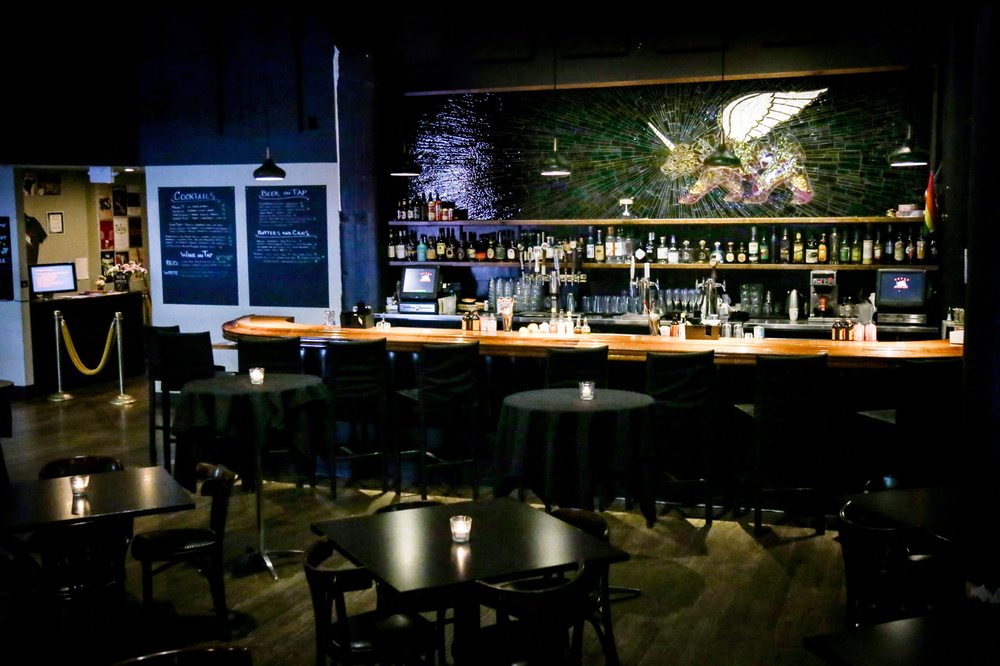 Need a reminder why we’re lucky to live in San Francisco in these new-monied, small-hearted times?  “Pint Sized Plays” provides one hell of a good reason with free, repeat FREE, six lively one-acts with colorful characters.  Their rules: action set in a bar, written by locals, and the length of a play cannot exceed the time it takes for one of its characters to drink a beer.

The action must be set in a bar since that’s where the audience sits, abjuring both of PianoFight’s stages. We perch at the bar or settle in at floor tables. “Ol’ Mac Remembers the Good Times” by Colin Johnson begins the evening with the brain-fried but lovable bar janitor Mac (Matt Gunnison). Mac wipes the tables and reminisces about the good old times in the Tenderloin back in the 70s. That’s all he can muster, after several decades of hard drinking.

Soon his smart, cynical addict buddy Chuckie (Ron Chapman) chimes in and the two argue, recall, and confuse one another as they crack wise. You have to find out for yourself how Mac’s girlfriend “Frosty” got her name.  Mac and Chuckie return over the course of the evening, always funny, and always with heart. Next up, “Full Steam Ahead” by Ruben Grijalva provides a funny, yet impressively accurate history of S.F.’s Anchor Brewing Company, which sold last week to Sapporo of Japan. We meet the enthusiastic Fritz Maytag (Robin Schild) who rescues Anchor from bankruptcy. What else can a rich kid do in the 1960s after finishing Japanese studies at Stanford?

The professorial Bartender (Colin Hussey) takes us through the Gold Rush and Prohibition, explaining how Repeal made beer boring—until Maytag kicked off craft brewing. Highlights include a daffy history of beer commercials and a priceless rendering of German and Brit beer drinkers commenting on boring American beer. Paul Stout and Jocelyn Truitt handle all the other roles with wit, style, and over-the-top accents.

In “Happenstance” by Andrew Calabrese, a bar Server explains her dreams, romance, and career while handling irritating customer demands. Kitty Torres as the Server starts by making us laugh, but gradually beguiles us into caring about her life and loves. Customers Christina Wong and Circle Dai are a flat out hoot, chewing over their couple issues.

“Pawn to King” by Sean Owens shows New Yorker writer Edward Sorel (Dan Krutz) playing chess with filmmaker Stanley Kubrick (Tony Crimele). Stakes are high: the Apocalypse looms. Crimele presents an entertaining Kubrick, cocky and cunning. Krutz is terrific as Sorrel—the walk, the vocabulary, that New York chauvinism. He makes it all work and all hilarious. “Pawn to King,” high-brow entry of the evening, boasts witty repartee and name dropping: You know Bergman is going come up with that chess game.

“Shakespeare Open Mic” by Michaela Stewart ensures something for everyone.  Her scene has three drama teachers (Deane Adrian, Michael James Hawkins, Sam DiSalvo) jealously competing in a game of Karaoke Shakespeare. Each thinks his/her performance is dazzling, but heckling from Ol’ Mac and Chuckie sets them straight.

Between plays, we have songs from Evan Wardell, a popular figure with the local crowd.

The beauty of the production is, of course, that if you don’t like one scene, pretty soon another comes along and you’ll like that one.  I recommend going early for dinner which will guarantee you a seat (word is out, the place was full).

It’s free (okay, it’s a bar, I admit you’ll probably want to buy a drink), but consider a donation. “Pint Sized Plays” makes theater as accessible as a beer, and you get to see local artists doing a very fine job.