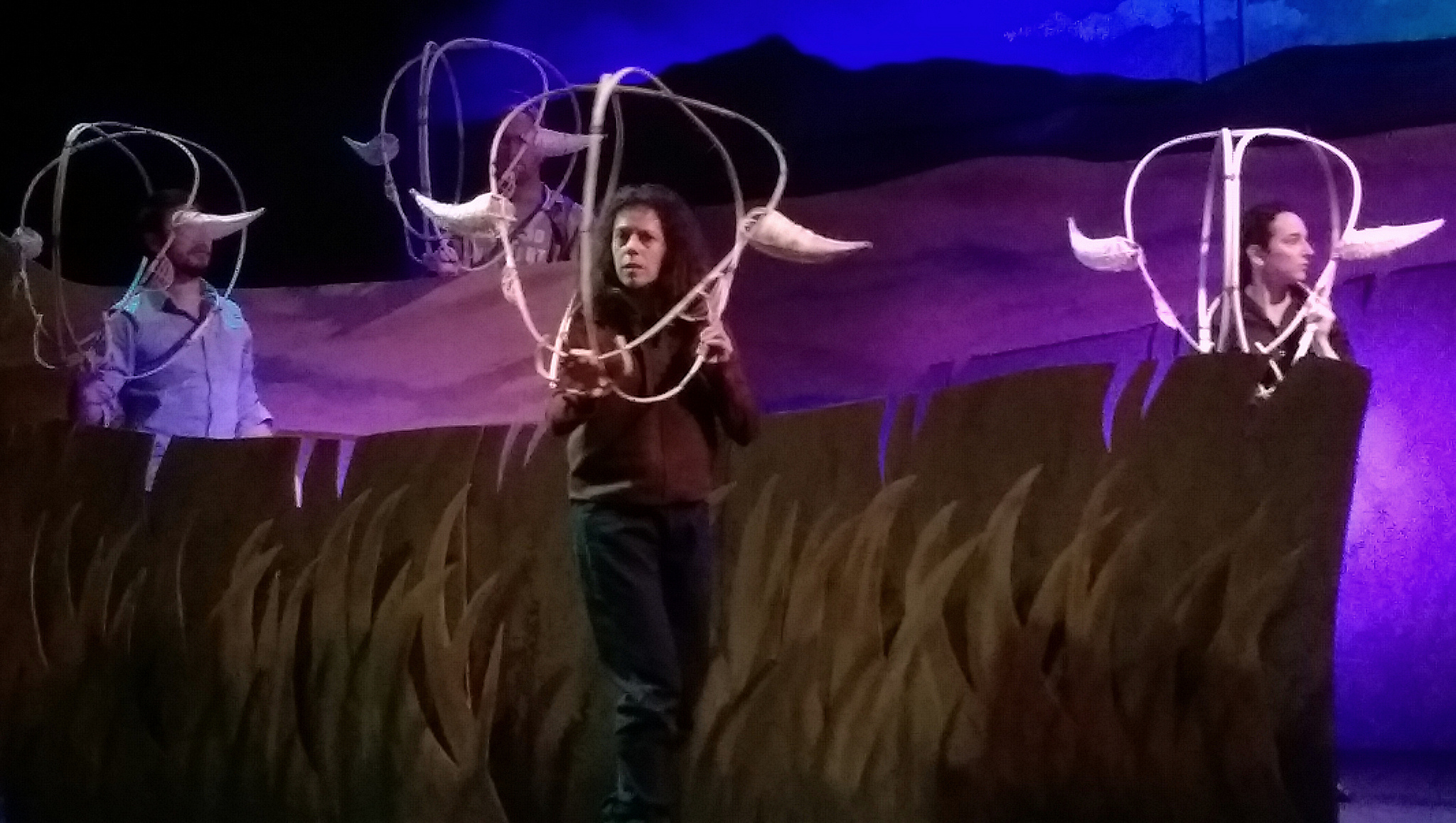 Nimbly juggling a rifle between bare feet, 13-year-old, bi-gender Montanan Brucie puzzles over dragons while rolling along a ridge. Brucie just stole a box of bullets for the rifle, and the dragon talk reflects Brucie’s confusion over being abandoned as an infant. Brucie is fascinated by the Doomsday clock. You’d be right to worry.

In “A Different Long Stretch of Earth,” history intrudes on everyone, including a fifth-generation cowboy negotiating sex with a stranger, and a visiting social justice activist weighing issues. Addie Ulrey explores decolonization, the myth of the cowboy, isolation, environmentalism, family, and violence. She crams so much into two acts, sometimes obscurely. A busy, fascinating place, this stretch of earth offers sex, taxidermy, activists’ workshop, bison burial, and Doomsday.

The bar brawl scene, that iconic Western staple, wins my heart. We get to relish non-profit do-gooders brawling in a Montana bar—a beautiful, funny choreographed dance with cowboy hats as weapons. Grim issues pop up in this stretch of Montana, but humor runs wild, too.

The characters are a treat. The Montana locals consist of Brucie and the two adults who stepped in to parent. Emmy Elizabeth Pierce’s Brucie is secretive and intense—angry and confused as any new teen. Brucie asserts, “People always tell you to forget the stuff that’s impossible to forget”—like abandonment or looking different from everyone else. Brucie lives with Marcia, an environmentalist who runs an Airbnb in her house. Rachel Brown’s outwardly tough Marcia gradually betrays an ambivalent nature. Marcia cares for Brucie but worries: “Children breed denial about the true state of the world.” Marcia cares a lot about bison, too, and suffers little from optimism.

Levi, a fifth-generation cowboy, the only other Asian for hundreds of miles, becomes Brucie’s unofficial father. Ryan Takemiya’s Levi, a shy loner, gets tongue-tied around people he loves. He’s also the traditional, slender, good looking cowboy. Levi draws the attention of Rose, a sexy stranger who wanders in from LA. A person of color, Akaina Ghosh’s Rose ignores politics and western icons. Rose lures Levi on, then tries to ward him off. Personal history intrudes too.

When three nonprofit staffers arrive for a seminar, it’s cancelled, so they construct their own workshop. Fenner’s punk yet professional Merrill walked away from a successful nonprofit career in Oakland. She started her own group dedicated to getting white people—like herself—out of social justice work that offers full time pay and benefits. She wants to make room for those not seen at the table. Merrill is irresistible, explaining “Our Mission is Omission.” Keith Cory Davis’ Steve is warm and a bit schlubby. From Minneapolis, he wants to do what’s right, though he doesn’t always get the politics. He works for a nonprofit called “One Hand One Heart Two Arms Open Up Step Up Hands On World Trust,” which tells us everything.  Mary Matabor’s Annette from Seattle rigidly follow her agenda, but worries how much her work matters. Stylish and earnest, if she keeps busy, she doesn’t have to consider if she’s happy.

A large shadow screen across the backstage adds magic. At one point a shadow leaves the screen and enters the stage.  Remarkable.

I’m glad to find this very different stretch of earth. Sacrosanct nonprofits get mocked, fixed ideas are challenged, and questions are asked—but not always answered. I’ll remember Brucie, a young rifle foot-juggler. I’ll cherish Merrill, whose work is dedicated to firing herself, and all her strange and wonderful friends at Ragged Wing Ensemble, in Oakland.

“A Different Long Stretch of Earth” by Addie Ulrey, directed by Amy Sass, by Ragged Wing Ensemble at the Flight Deck in Oakland, through Saturday, April 28, 2018. Info: www.raggedwing.org