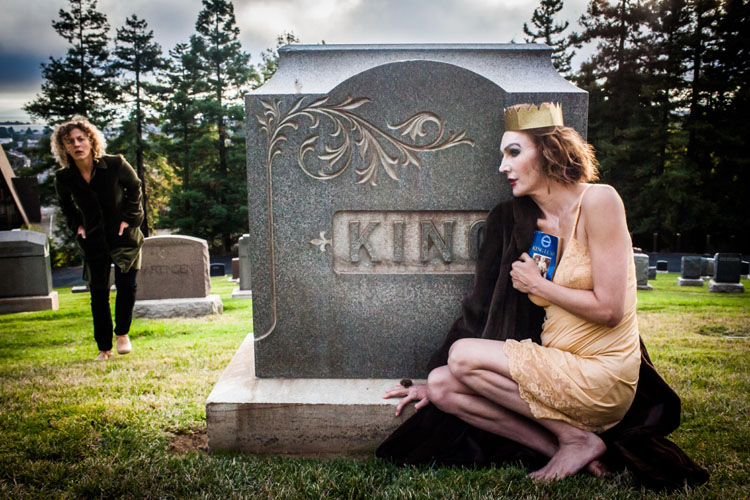 An old woman shuffles onto a bare stage in a beautiful, vintage fur coat and old, raggedy pajama bottoms. Her paper crown glistens in the lights. Everything about her is contradictory. The deep tones of her voice dominate the room, but her unkempt appearance suggests she could blend in with the forgotten homeless on Market Street, just outside.

Wrinkled skin and discolored hair show her age, but her incoherent rambling and the karaoke machine strung around her neck make her look like a child. We are looking into the eyes of dementia. The sufferer is Lear (impressive Courtney Walsh) in We Players’ take on Shakespeare’s King Lear.

Lear, an aging Shakespeare scholar, is the mother of Cordelia (talented Ava Ray). Only Cordelia, of her three grown daughters, shows up during the 60 minute two-woman play. The absence of her other two children fills us with despair for Lear, who clearly needs care from her family.

Lear’s use of language strikes us, forcefully. Dementia has left her only lines remembered from Shakespeare’s Lear. She uses the dialogue like charades, to express what she feels but cannot say. What Lear has lost in conversation is made up by Shakespeare’s rich script.

Frail and demented, the old woman frightens us, but she struggles to act as commanding King Lear. Her ferocity makes us think twice about her fragility.

It all takes place in the same apartment, where Cordelia attempts to coax her mother out for an afternoon out with family. Roy and Walsh put Mother Lear’s and Cordelia’s emotional lives on display. We feel their motivations and fears, more than the plot. When Cordelia thinks she has convinced her mother to exit the apartment, Lear runs back inside at the sight of the door opening. Like a game of cat and mouse, they repeat the simple action. But the emotional stakes run high.

While Lear speaks in Shakespeare’s iambic pentameter, Cordelia sometimes switches into everyday English. She constantly shifts back and forth between the world of her mother’s fantasy, and our day-to-day life—where we fear to talk openly about dementia.

Cordelia is full of life when playing along with her mother, engaged in the world of King Lear.  When Cordelia pretends to be the King’s fool, she inspires fleeting moments of laughter. But she also expresses profound frustration when grave reality sets in. During a climactic moment, Cordelia tries relentlessly to clean her mother’s face and brush her hair. Swept away by emotion, Lear raises a fist, aimed at her daughter.

Cordelia snaps out of her Shakespearean reverie and reins sternly scolds her mother: “You do not get to hurt me!” It is a moment charged with emotion that leaves me with eyes glazed with tears.

“Mother Lear” raises the bar for intimate Shakespeare. We Players engages uniquely with difficult ideas of aging and death.  In just one hour, they take us on a winding emotional journey. I leave with an amplified sense of sympathy for caretakers and respect for aging, especially for those suffering through dementia.