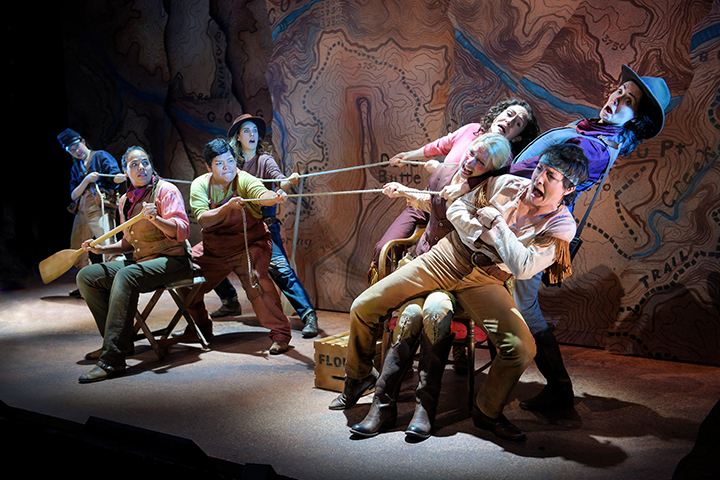 In “Men on Boats,” Jaclyn Backhaus transforms the deadpan journals of a 19th century explorer into a thrilling, hilarious play that ridicules masculine myths and U.S. “Manifest Destiny.”

The canyon walls loom above them─towering, orange-red topographic maps of endless canyons. The huge sliding panels of the “undiscovered” West lend a cartoon feeling to their river quest.

These women amaze us with their mocking male antics in the Western wilderness─you have to laugh at the calm, rugged John Colton Sumner (impressive Libby King) and the exuberant cook Billy Hawkins (volcanic Amy Lizardo).

We are moved by their boyish antics and self-deceptions, and ponder their gender roles and attitudes. Their posturing makes a mockery of male pretensions, revealing gender as a learned role. These gender-bending glimpses create enormous laughs, but Backhaus has other fish to fry.  Her all female crew illuminates the in-your-face cowboy constraints on western maleness. It takes real women to do that─and makes great comedy.

“Men on Boats” follows Powell’s first ever expedition─except for Native Americans, of course─down the Colorado River and into the Grand Canyon. The hardship of the journey is brilliantly portrayed on stage by the actors’ choreographed physicality.

Some want to abandon the trip; some believe in ‘friendly’ Indians. With a few funny props, we sweep down the Colorado River, clinging to three mock boats, screaming down wild waterfalls. Woodard’s precise direction is simply exhilarating.

Backhaus ultimately questions what it means to be an explorer. Although Powell and friends claim they are discovering “virgin western territory,” we know better. Powell and Dunn are absurdly obsessed with naming land features after themselves.

“Men on Boats” pits caution against risk. Are we on an American adventure for the general welfare or just paddling along an ego trip? The all women team takes us down the Colorado to discover answers─with great fun and excitement. Watch out for those rapids ahead. And that rattlesnake! Best trip ever.

Banner photo: The Ensemble on the river. Photos by Kevin Berne