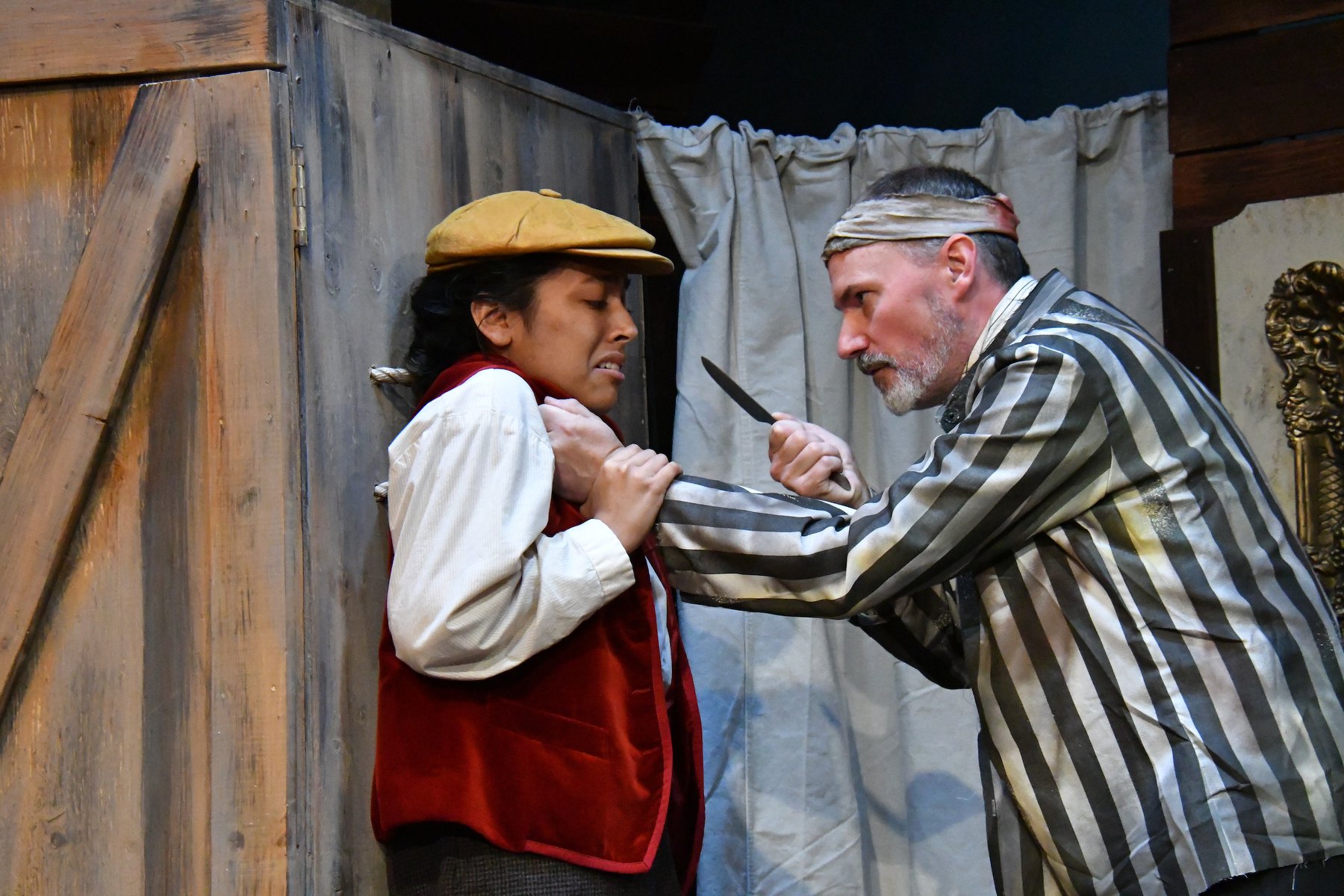 Most of us are familiar with Great Expectations─Charles Dickens’ Victorian novel about a boy who sells his soul to move up the social ladder. Gale Child Daly’s adaptation suffers, like Pip, the hero, from an off-kilter GPS and chaotic staging. Great Expectations (1861-62) was released in weekly serial segments, so it’s tricky to fit all that Dickensian satire onstage. But it’s clear that the source of British imperial wealth is criminally tainted.

Daly’s play is jam-packed with larger than life characters, lessons about rejection, and the clash between wealth and poverty. The ambitious playwright works hard to pull together a story with over 40 characters over several decades into two hours on stage. She further challenges herself by using only six actors to tell the story, resulting in a swift rotation of faces and personas.

The most notable characters in the novel and movies are Pip, Miss Havisham, and Estella. The roles of Pip and Estella are divided: Young Pip and grown Pip (Kenneth Greenwell and Salim Razawi); Young Estella and grown Estella (Laren Breidenback and Marisa Darabi). Darabi stands out, and her performance as Biddy, Pip’s sister, offers genuine sentiment and melancholy.

Several actors play multiple characters in one scene, with split-second costume changes. Dexterous Costume Designer Denise Altaffer works in over-drive, but it’s hard to keep up, and we are distracted by multiple costumes layered on the actors.

Daly maintains Dickens’ use of Pip as a narrator, while five other narrators chime in. Each actor plays from four to thirteen characters. Actors run around the stage, creating tiring confusion.

Narrator #2 (expressive, vivid Nathan Emley) plays both Mr. Wopsle and Herbert Pocket, both appealing and memorable roles. He makes Wopsle and Pocket shine with energy and exuberance. The flexible Kira Zabrowski plays Miss Havisham with excessively campy drama. But it’s hard to fault her because she plays twelve other characters, as well.

Kudos to Director Dennis Markam for even attempting this feverish stage version of a beloved novel. Markham manages the hectic troupe, pulling the busy script together. They tell Dickens’ story of the Victorian upper crust cruelly manipulating the down and out folks.

As in “A Christmas Carol,” Dickens ends his novel on a hopeful note. Pip’s remorse about his youthful arrogance makes us feel sympathy and hope that we can change our own elite fantasies.