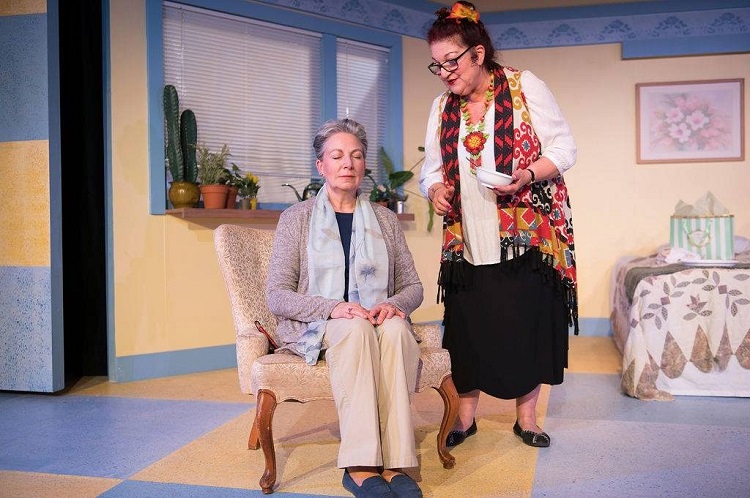 “Ripcord” by David Lindsay-Abaire tells the story of two women sharing a room in a senior living home, surprising us with humor, enmity, and jokes. Strewn with witty one-liners and wonderfully absurd inventions, “Ripcord” makes every minute fun.

The humorless Abby (commanding Laurie Strawn), prim and stern, is infuriated by her new roommate, the eccentric Marilyn (colorful Sandi V. Weldon). Strawn assumes the role of a strict former school teacher effortlessly, and with an incredibly straight posture. She’s a wonder to watch.

Strawn as Abby and Weldon as Marilyn, supported by a superb cast, expertly bring their contentious relation to life. Director A.C. Carollo has smoothly woven Lindsay-Abaire’s smart script into a moment by moment marvel of stagecraft.

Weldon jumps right in to Marilyn, just as Marilyn dives into each battle with a smile on her face and a flower in her hair. Marilyn is colorful, cheerful, chatty–everything Abby is not. Their clever disagreements lead to a bet:  If Abby can make Marilyn angry, Marilyn will move out.

But, if Marilyn can frighten Abby, Marilyn can stay and take the bed by the window. The wager leads to a cycle of comic competition , with their antics becoming increasingly bizarre and funny.

Marilyn enlists the aid of her daughter Colleen (energetic Kim Donovan) and son-in-law Derek (brilliant DC Scarpelli), each adding hilarity. When Abby is shanghaied into an airplane, she is forced into a magnificent tandem skydiving adventure.

Admittedly, when it began I held my breath. Not actually airborne, their  jerky back, arm, and head movements feel like an amazing jump. It’s a wild ride.

The clash of characters—an uptight, disappointed woman against a clever, resourceful woman—makes us see how imaginative both can be. These actors make “Ripcord” an exciting jump into new ways of getting along.  We understand how these characters got into their predicaments and how they can get out.

With great writing, directing, and acting, “Ripcord” takes us on a comic leap of a lifetime.