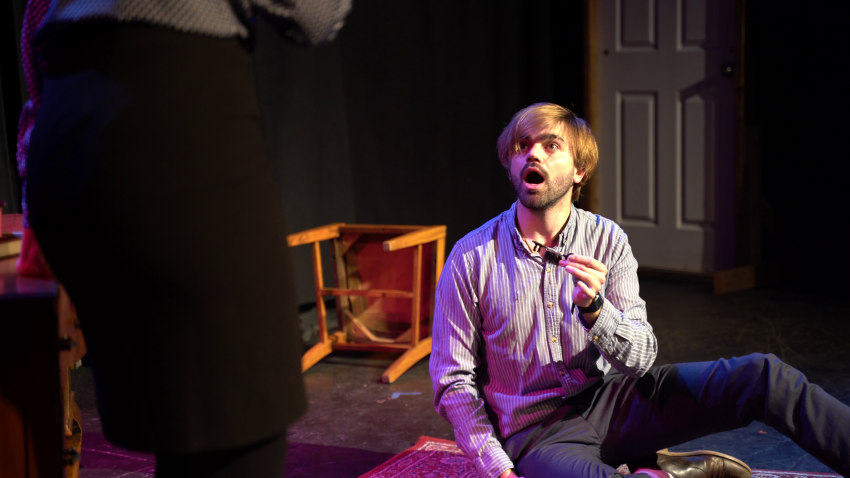 A bearded man in corduroy blazer wanders onstage and flinches when he sees the audience.  He fishes for his reading glasses, then introduces himself as a professor of Classics at Faber College, pausing at the school name so we can ponder its familiarity. The Prof explains he is a consultant for the play, then sneers that, unlike The DaVinci Code, all the classical events and references in this play are accurate.

Those who remember the name of the learned institution in Animal House know how seriously to take that claim—or anything that follows.

Aristotle did write the oldest known treatise on drama, the Poetics. Poetics, Book 1 is about tragedy and is read still. Poetics, Book 2 is on comedy and still utterly lost to history. Or is it?  If it exists, who has it, and why hide it? Could it hold the power to kill? (Cue the ominous music.)

Two young scholars of Classics are shocked at the death of Seth Rogan, more so when his assistant shows up to deliver a coded message sent just before his death. Helen Longstreth’s scholar Robin is competent, reserved, and speaks with an English accent –so we know she’s smart. Her partner Fred, played by Michael Betts of tousled hair and high voice, when scared, does his diligent best to keep up with Robin.  They untangle clues, tracing a path through the history of comedy, stumbling across Charlie Chaplin’s mustache or probing an LP recording of Abbott and Costello’s Who’s on First.

Like any good conspiracy, we have puzzling clues and ancient books. We have eggheads, monks in robes, a Greek chorus of one, and villains with evil laughs.  More than a skillful satire of pseudo-intellectual conspiracy thrillers, “Poetics 2” offers a loving tribute to comedy.

These villains are comedians gone astray, seeking Poetic 2’s power to spread evil ideas. The good guys, the best comic artists, are protecting the book’s lost pages. Shakespeare did, and Dave Chappelle, until he lost his pages, causing him to quit his show and head to Africa.

Dark Age monks Brothers Schoof and Duncan, who are charged with preserving ancient works like Aristotle’s, show up in flashback–both are terrific. Brian Eurice’s Schoof brims with hilarious top energy, and Jack Roger’s Duncan earnestly and patiently tries to help his manic friend.

Anyone not equally an expert on classical Greece, the DaVinci Code, and the history of comedy might miss a joke or two. Not to worry, it’s non-stop gags with enough broad humor to keep us laughing.

PianoFight is a bar and restaurant too.  Have dinner first to support local, original theater. At least buy a drink to take to your seat, so you can kick back and get in the mood for the nuttiness about to descend.