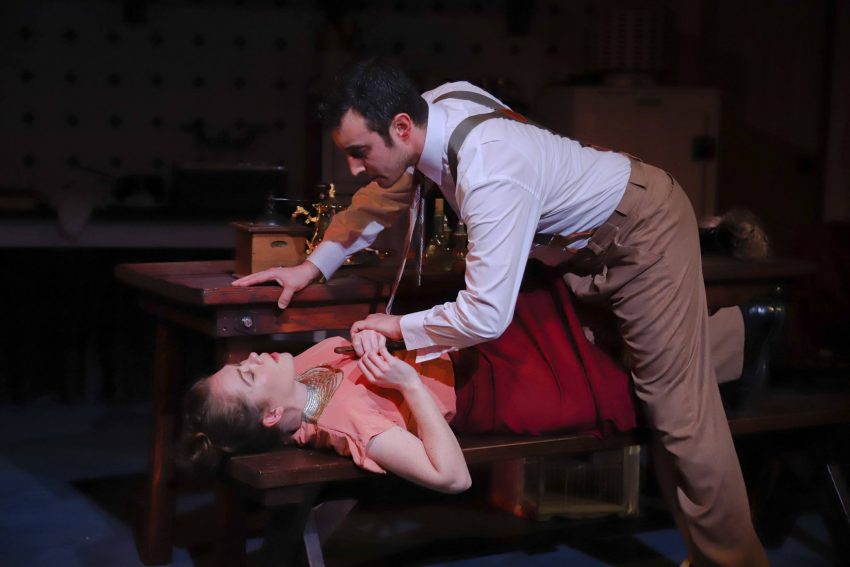 Patrick Marber Exposes Tyranny of the One Percent

“After Miss Julie” explores the clash of class and sex in a bedlam of emotions in 90 swift minutes. Patrick Marber’s redo of August Strindberg’s tragedy “Miss Julie” moves from 1888 Sweden to 1945 England, on the night of the Socialist Labour Party’s landslide victory. Churchill is voted out and hopes for social equality are in. Or are they?

Marber points to post-war Britain and Labour’s shocking upset to anchor our attention on the class divide. Sexual politics and gamesmanship divert us, as sex and politics ignite his rich comedic drama.

While Marber spotlights Miss Julie as the focal point and tarnished heroine of the play, the role of John, as well as Sam Coughlin’s performance, dominate Main Stage West’s production.

John is assaulted from both sides, throwing him into conflict. He is willing and able to dominate both Christine and Julie, both of whom he perceives as weak. But Coughlin’s John cannot break away from his bosses, who remain his “social superiors.” Coughlin expertly delivers the air of a defeated man, who dreams of equality, but is too proud and afraid of freedom to walk away from his job as a servant to the rich.

“After Miss Julie” begins downstairs, in the servants-only kitchen, emphasizing the upstairs/downstairs dynamic of class division. Elizabeth Craven’s scenic design demonstrates her usual heightened attention to detail. I swear that coffee grinder came right out of my Irish grandmother’s kitchen!

When John arrives, he shares a simple easiness with Christine, while they quietly celebrate the beginning of the working man’s era. Drunken and flush from a night of endless flirting, Miss Julie, their employer’s daughter, intrudes upon their space, making a beeline for John. Clearly, they are playing an ongoing sexual game, playfully trying to seduce each other. I watch, sickened, while neither tries to hide their demented game from the earnest Christine.

At this moment, each actor’s commitment proves hypnotic, drawing me in. They channel the essence of their characters so precisely, that I find myself leaving the story to admire their raw craft.

Sex momentarily distracts our attention from class, as their evening turns into a psychotic whirlwind of seduction, and sado-masochistic emotions. Marber delivers a macabre, tragic dance of weakness and vulnerability. The collision is deadly; the fallout is tragic.

When the fire burns out, we understand with chilly resolve, that class and status grip us more than we realize. Are we hostages to fortune? Can we ever escape our class origins?

Despite our fondest desires for hope and change, we may all be held back by our conventional notions. “After Miss Julie” shows that habits are harder to break than we thought.