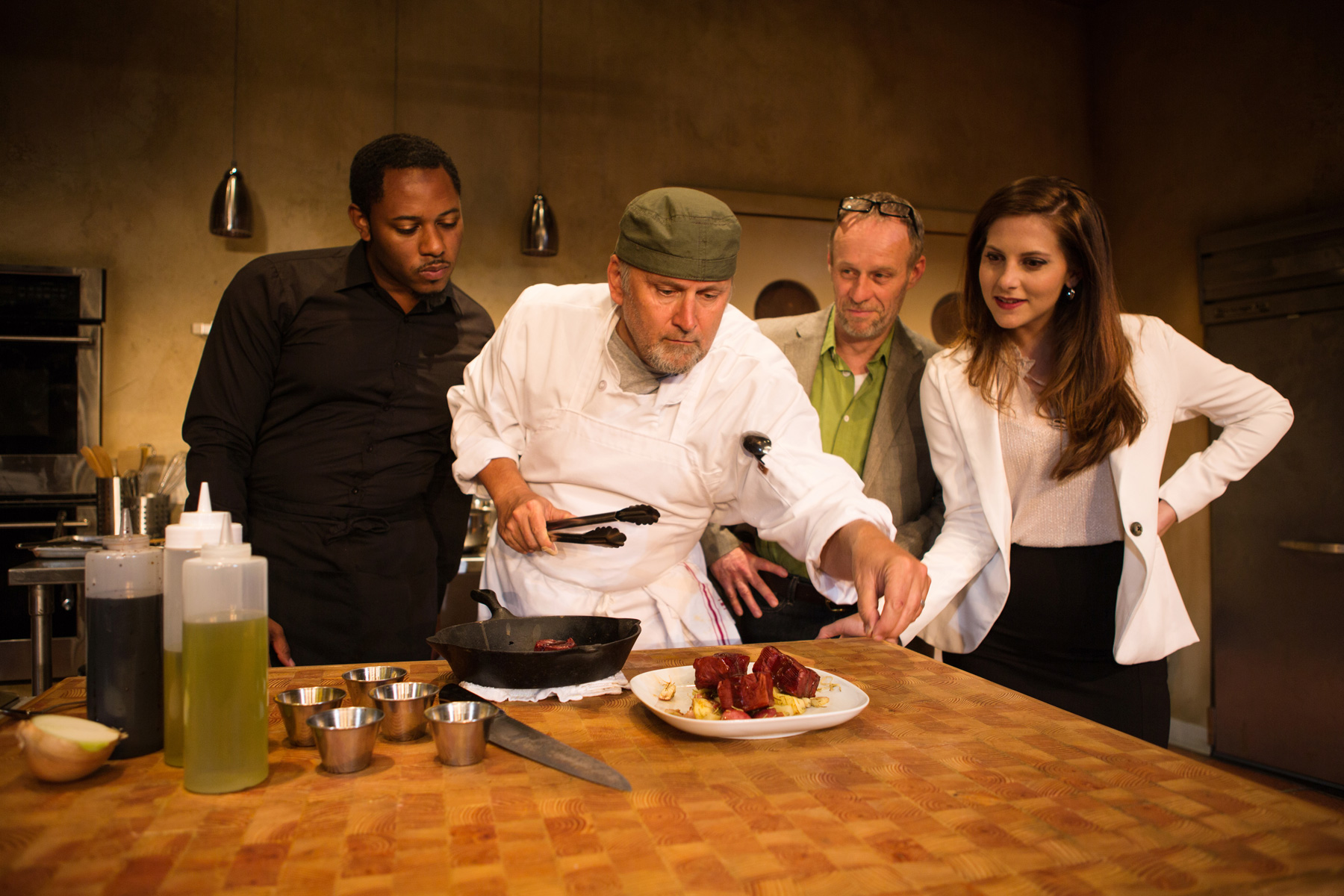 “Seared” puts everyone who likes food in their comfort zone, immediately. Cook pots hang from the ceiling; stew pots simmer and smoke. The chef’s tools rest on the butcher block in the massive kitchen, at the ready for prep.   The stage set by Bill English wows us again with a working restaurant kitchen onstage, so authentic looking that it invites you to step up and cook. But the Gods of Cuisine have sent us Harry (a forceful and pitch-perfect Brian Dykstra), a masterful and uncompromising chef who has been working there with his partner, Mike, for  two years. And be forewarned. Harry will be sending us delicious cooking aromas throughout the play.

Theresa Rebeck, commissioned by San Francisco Playhouse, has written a personality piece for actor and friend Dykstra. As Harry the chef, Dykstra shows us an obsessed tyrant defending his food fiefdom where “no one can be his boss.” He’s the genius who is attracting a big following to their cute little Brooklyn bistro. Harry is the lynch pin of their success–or so he imagines.  Although New York Magazine has issued a rave review, Harry refuses to enjoy his success or let anyone else enjoy it either. He won’t cooperate with Mike, (a frustrated Rod Gnapp), and dodges Mike’s ideas for expanding the business to finally make some money.  Harry will not even capitalize on his now famous herb-infused, sautéed scallops that are bringing New York to their door.  He refuses to cook them because he cannot get the freshest ingredients — or so he says.  In fact, Harry has no excuse for not satisfying his scallop-hungry customers, other than his unique brand of perversity.

As the arguments heighten, we try to figure out what Harry wants. He is a master at finding loopholes as he debates with and staves off the three other restaurant help: Mike, the business investor and front waiter; Rodney, the clever waiter and bus boy (a witty Larry Powell); and Emily, their new Marketing consultant (a relentlessly smiley and strategically motivated Alex Sunderhaus). Mike, Rodney and Emily are soon arguing about how to promote the restaurant. They circle the Master Chef, trying to befriend, humor, flatter or seduce him into cooperating in a cause larger than himself.

His partner Mike has a past history with the Chef. He knows that Harry stands against all order and planning, a bohemian, an “artiste.” So he has gambled on giving Harry his own world in which to create fantastic food. Larry Powell’s Rodney, the waiter, apprentice, and peace-maker, lovingly fills out the tiny staff with patience and spot-on humor. Rodney’s rich charm makes him a surprise key player in this mini-saga.

When Mike stirs into this Male-Only kingdom the pert, talkative, and flirty restaurant consultant, Emily, we are on alert for Harry’s violent reaction to this new invasion into his world. Smart, snazzy, and sexy, Emily astounds us with her stream of biz-talk, pep and flattery—pitching to make her own mark. In short, when anyone is around, Harry is on edge and ready to say “No.” When Harry is left alone, late at night, experimenting with a new dish, mixing it up in his kitchen to a Bob Dylan song, he is in his element. At that moment, he knows himself and cooks to his own personal standard.

This is a play about difficult but talented people. How we want to work with them and celebrate them. And how they can thwart good intentions, every time. Harry is inflexible; he cannot give emotionally, out of a pernicious mix of rebellion, fear, and lack of confidence. He has built himself a loner’s castle to shield himself from touching people. He argues to ridiculous lengths—especially when he knows he is wrong!  He knows he is needed in the restaurant. That is what he needs most.

Rod Gnapp, Larry Powell, and Alex Sunderhaus are so finely cast in this ensemble that its almost a shame that Dykstra’s Harry sucks up so much airtime. Also notable is the sound design by Theodore Hulsker that roars us from scene to scene, echoing the emotional charge and tenor of the play. The lighting by Robert Hand invites us into precise character vignettes and portraits before each scene. Bill English’s bravura set provides the detailed look without distracting us with unneeded paraphernalia. And Director Margarett Perry keeps the action tight.

“Seared” is a bumpy emotional ride and a feast for the mind. But be sure to eat dinner first, as the cooking aromas may drive you as mad or hungry as Harry or Mike in their wild debates. Which is right: the businessman or the chef?  Is theirs the insoluble question of capitalism—or, is their difference what makes our world go round?