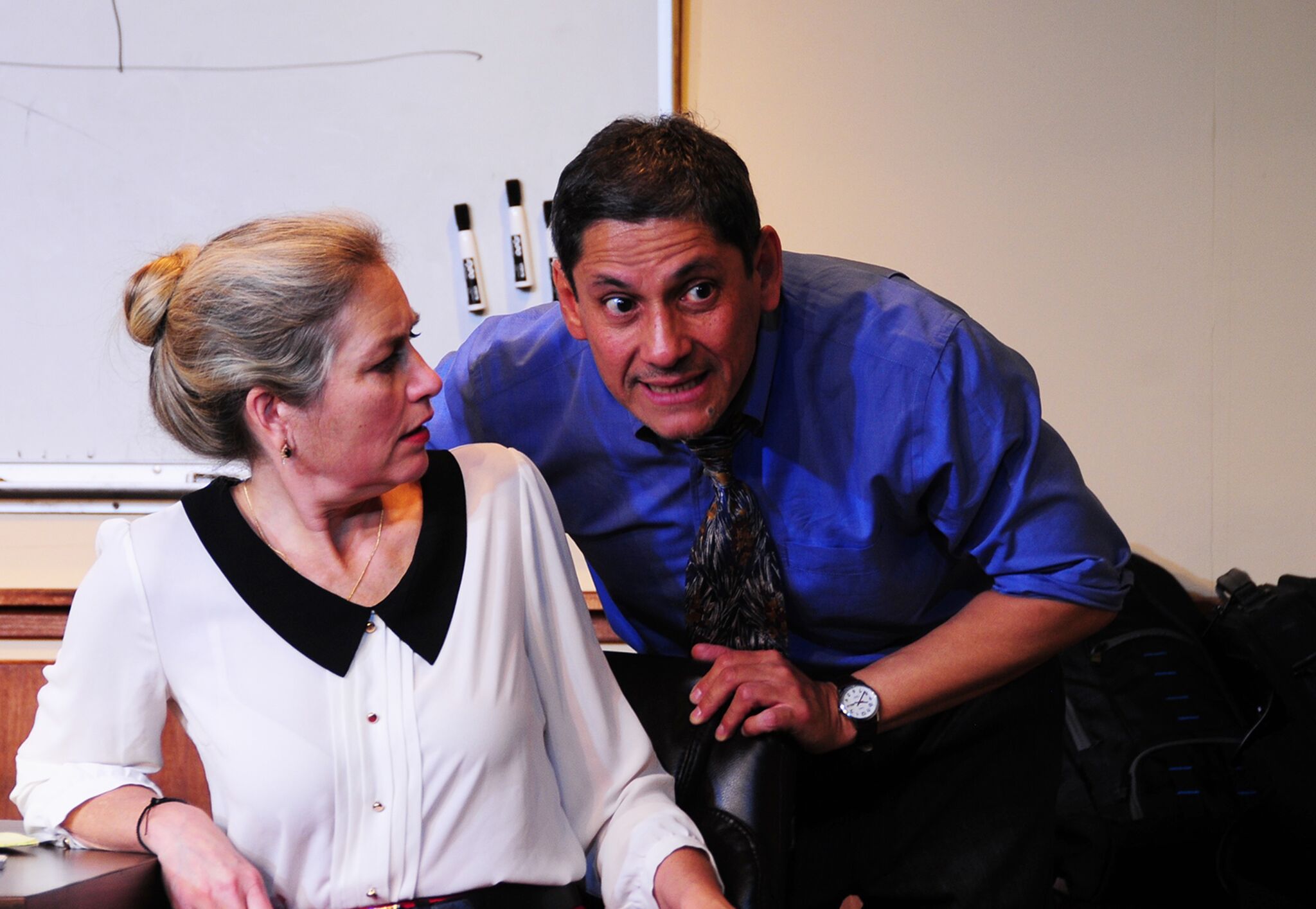 “Ideation” by Aaron Loeb asks us to think about things we would rather not consider. A dark comedy with equal measures of humor and dread, Loeb’s play baffles (and rattles) us, as we watch ace corporate consultants in brainstorming sessions. Gradually, the recognizable managerial types slip from cold calculation of probabilities to confused paranoia.  Unless, of course, it’s not paranoia, but righteous outrage—and fear.

When they first get down to work, three engineers and a middle manager look like they have it all under control. Seasoned and brilliant, these experts, hand-picked by the boss, are set to tackle a huge and vital crisis. As we learn more about the specifics of their project, we discover the awful particulars of their commission and the potential consequences to all humanity.

As the team delves deeper, theorizing and reckoning, their doubts take hold. The more they speculate, the more confounded and fearful they become.  Listening and watching, we also become unbalanced. Bewildered as the characters we are watching, we ask the same questions:  Is this project a call to duty or a conspiracy?  Is this conjecture plausible or perilous?  Who can be trusted?  Who will betray us?

Without divulging the play’s central riddle, I can tell you the play touches on the issues we live with—gender, race, and immigration. But Loeb never loses sight of his fundamental inquiry: What is one person’s responsibility to an elite class that is enamoured of its own glorious accomplishments?

Considering the horrors created by technicians in the past, this is hardly a new question.  The Greek engineer Daedalus, eager to demonstrate his competence, designed a labyrinth for King Minos from which no one could ever escape. In the Nazi era, some engineer or architect calculated the number of corpses that could be methodically consumed in their crematoriums.

In 2002, U.C. Law Professor John C. Yoo, working with the Justice Department, wrote a legal argument to deny the Geneva Conventions to Afghan war prisoners.  These issues have never been more timely. Today engineers and technicians hold great power in our world.  Their proficencies and expertise—skills that most of us do not have or understand—permit them to create realities for the rest of us.  We need artists like Mr. Loeb to help the technicians who are constructing our future fathom what they are about.

Because words create both the suspense and the humor in the play, “Ideation” features witty and funny conversations.  But these crafty words conceal as much as they reveal, hiding truths under jargon and corporate lingo. Early in the play rules are set for what cannot be said:  “Rule # 3—Do not use the N-word.” An hour after we learn this Rule #3, our assumptions about its meaning are turned upside down, in a way we are unlikely to forget.

Loeb’s articulate word play requires a skilled and intelligent cast. All do a fine job here.  Hannah (the competent, brittle Marianne Shine) is a female middle manager in a primarily male corporate consulting firm. While careful to hide her forbidden office affair, in all other ways she appears a company woman. She wears the perfect suit and has the requisite tough demeanor. She handles middle management like a pro, facilitating the talent while reporting to the top man. When her moral center intrudes into her career, she is as surprised as everyone else.

The engineering team is made up of strutting, accomplished top-dogs.  Brock (a cock-sure Ben Ortega) is savvy, in-charge, and high speed.  Brock’s ideas roll out so quickly that he often stammers when his words cannot keep up with his mind. Ted (a hard-headed Len Shaffer) comes off as the archetypal common-sense engineer, more interested in finishing the job than knowing what it’s all about.

Sandeep (a cryptic Heren Patel) provokes the others. The youngest on the team, with elite schooling and experience, he is nonetheless dependent on the firm for his work visa from India.  He is the first to raise doubts that disturb the team.

Scooter (an obnoxious Jeremy Judge) is a young, loathsome intern who makes us wish it were legal to smack a co-worker. He has the job because Dad is on the Board. There is, finally, the boss, J.D. (uncredited), whom we meet only through phone and video-conferencing.

Director Queenelle Minet keeps the pace fast, so our interest, horror, and laughter run smoothly for 90 minutes without a break. Although we might quibble about the credibility of the fight scene, “Ideation” is a funny, sharp-edged, and chilling work.

All the action takes place in one set, a conference room focused on a wall sized whiteboard  You are very lucky if you have avoided such rooms: a long table, boilerplate chairs, white erase board with markers, water, pads and pens. Gary Gosner’s set ensures that we are cut off and closed in for this team conference. Rick Banghart convincingly handles the sound for cell calls and videos.

Playwright Aaron Loeb grew up in central Illinois but has been a Berkeleyite since 1995, when he arrived looking for a tech job and found work as a video game designer. “Ideation,” his third play, won the Glickman Award for best play to premiere in the Bay Area in 2013.

Marin Onstage brings us something new and sharply performed. If you work or aspire to work in in a tech company, you probably need to see “Ideation.”  Afterward, you may ask yourself the question that’s been haunting me: Am I paranoid about the right stuff?