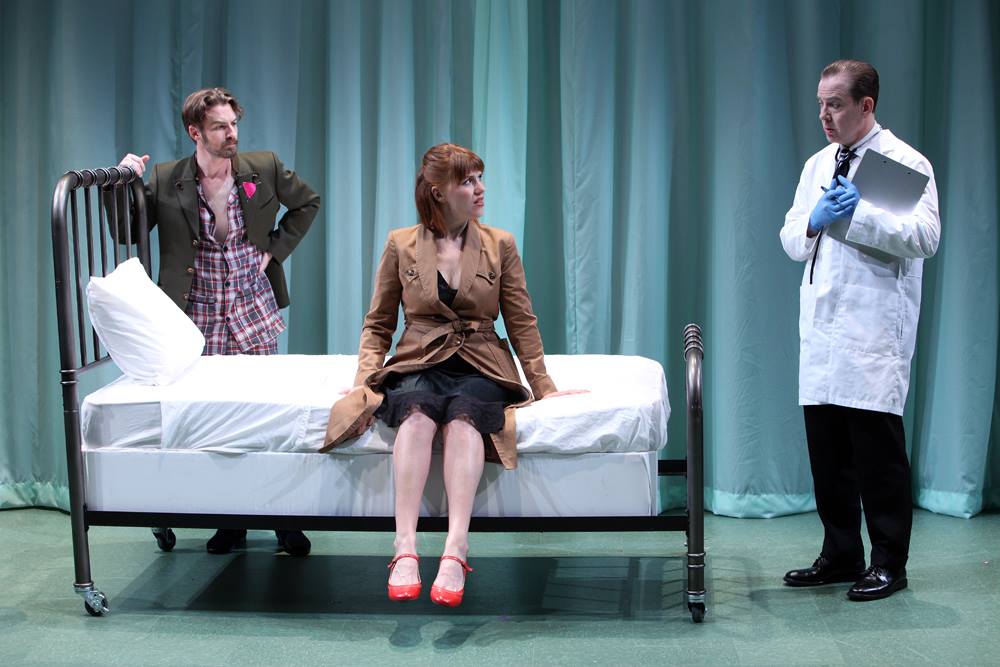 A fantasia with lots of farcical sex and laughs, “The Baltimore Waltz” ultimately leads us to harsh truth. Kindly, playwright Paul Vogel, who wrote the play after her brother died of AIDS during the height of the pandemic, leaves us with hope. The Magic Theatre brings back Vogel’s 1992 play, directed by Jonathan Moscone, for a “Legacy Revival,” 25 years later, in their 50th season.

Anna (a shining, engaging Lauren English) is a whimsical, dreamy young woman who is comically diagnosed with a terminal disease with a hilarious name and ridiculous cause. Peculiarly, her unknown disease afflicts only elementary school teachers. So, she heads off on a stereotypical European tour to enjoy her remaining time. They take a whimsical trip, thanks to Moscone’s sprightly, witty direction.

She goes with her beloved older brother, Carl, who insists she check out the rumored miracle cure of a secretive and eccentric Viennese doctor. Anna’s goal, however, is to celebrate the rest of her life, lustily. Anna’s attitude: “Elizabeth Kübler-Ross can sit on my face!” English performs magic in comedy, rushing from French to Dutch to German waiters and bell-hops to make up for lost time.

We fall in love with Anna’s gay brother Carl (a whimsical, sensitive Patrick Alparone) as soon as we meet him. Alparone plays Carl as smart, sweet, and energetic. He wears pajamas with a blazer through most of the play, one of several clues that we are traveling in a fantasy land. Alparone makes us believe in Carl’s emotions—his love for his sister, his contempt for his boss at the library, and frustration with homophobic airport security. But Carl is disappointed in Anna when she fails to share his enthusiasm for European museums. Frantic Anna spends all her time on a European Grand Tour of casual sex.

The aptly named “Third Man” (a multi-talented Greg Jackson), expertly plays all other parts.  Jackson serves as the third person in all encounters with the sister and brother. He starts as the doctor giving Anna her diagnosis, in white coat and blue gloves. Those blue gloves stay on for the many other characters he plays, a comic reminder of fantasia. Jackson mutates into all of Anna’s and Carl’s lovers in their brief encounters. He portrays the classic film noir Third Man, Harry Lime, from Graham Greene’s book and Orson Welles’ movie, conniving to sell a shady miracle drug at high price. The Third Man’s characters all appear in the dream world, employing exaggerated, comic manners and speech. Jackson manages it all expertly, moving in and out of costumes and accents, always funny and splashy.

Pain can be kept at a distance in a dream world, but dream worlds do not endure.  Eventually this fantasy cracks, returning Anna and Carl to reality, back home. Now she must face the long evaded death and longing and regret.

Paula Vogel won the Pulitzer Prize for her 1997 play “How I Learned to Drive.” Five years earlier, “The Baltimore Waltz” premiered at the Magic Theatre in 1992. Vogel’s older brother died of AIDS in 1988; she wrote “Baltimore” while her pain was fresh. Although AIDS is never directly acknowledged, clearly Anna’s disease is a metaphor. A quarter of century on, those bits of the play intended to enlighten audiences on the pandemic come across as evocative and elegaic.

A study in deep loss, Anna’s story shows us how to handle grieving, memory, and regret. I lost my brother a decade ago to cancer and there was so much here that I remembered, that spoke directly to my experience. We see far more romantic love than family love in drama. It is rare to see a story of the love between a brother and sister, so Vogel’s play offers a special insight.

If you enjoy high quality acting, symbolism galore, and hearty laughs, you will find fantasy and pleasure in “The Baltimore Waltz.” Those who have lost a close family member will find even more to appreciate.

The only way we can dance with a loved one who has died is in our memories or in the hope of a possible afterlife—unless you are lucky enough to be a playwright who can bring that dance to life on stage.

“The Baltimore Waltz” by Paula Vogel, directed by Jonathan Moscone, at the Magic Theatre, through Sunday, April 16, 2017. Info: magictheatre.org