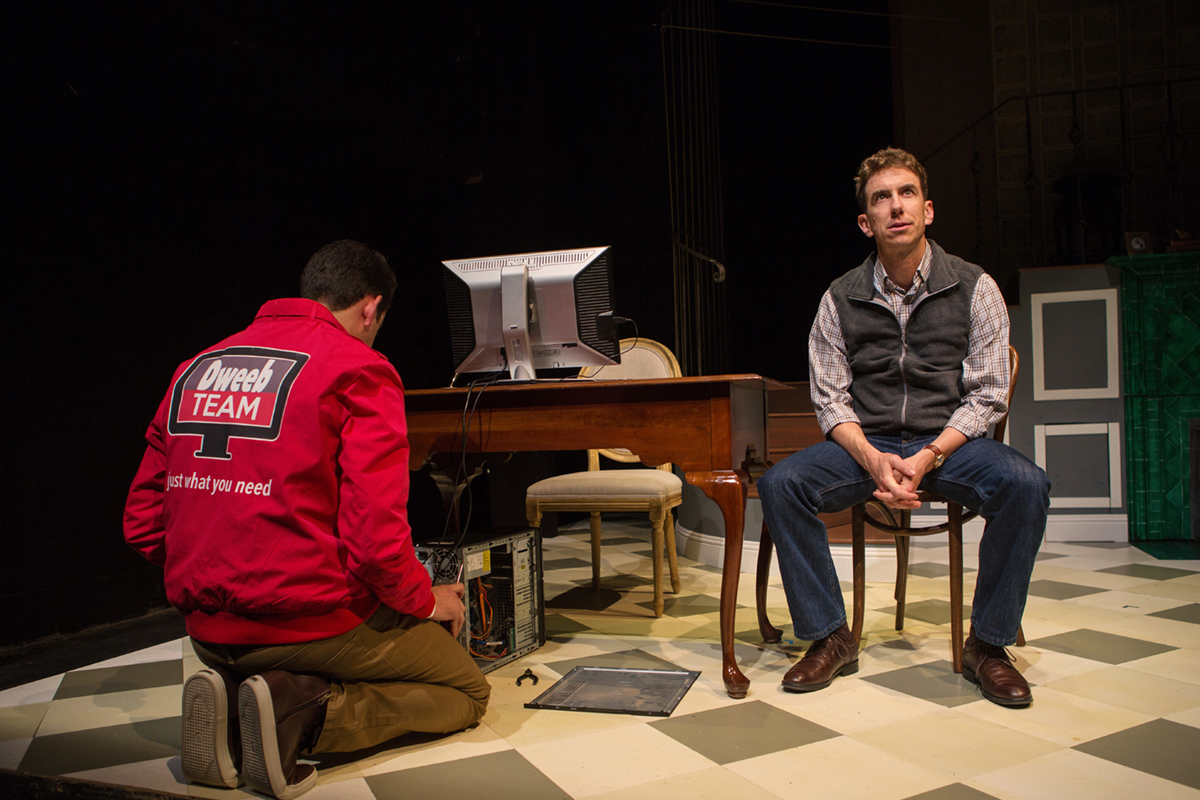 In “The (curious case of the) Watson Intelligence,” the character called Watson embodies a human version of iPhone’s Siri. Watson is the perfect companion in every situation. Set in parallel dimensions, three storylines blend fluently into one love triangle.

Director Nancy Carlin smartly maneuvers the actors around the stage like chess pieces, creating smooth transitions. At one moment, Merrick (brilliant Mick Mize) is tying his tie and getting ready for his 2011 political campaign. The next thing we know, Merrick is switching to a funny looking old-fashioned tie, as his boisterous speech slips from modern American to Victorian British. He is Merrick but from another time and place.

The crafty blocking leads us through three stories and a total of four Watsons: Watson the CPU; Dr. Watson from Sherlock Holmes; Watson who helped invent the first telephone; and Watson, a neighborhood computer geek.

The Watson intelligence knows us better than we know ourselves and really wants to give you “just what you need.” Have you ever had a Google reminder that you forgot setting up? Or has Siri ever given you the best route to work without your asking?

Each Watson (all played by a passionate Brady Morales) represents our misconnection with technology, today. After all, our cell phones are a part of our identity. We are intimate with bytes of selfies, Facebook, and Snapchat. The Watson intelligence inspires the technology that begins to know us based on our own input.

Watson stands for the emotional intelligence lacking in artificial intel. All four Watsons are love-slaves to the lady of the show, Eliza (sarcastic Sarah Mitchell), Merrick’s unhappy/ex-wife in each scenario.

As Eliza, Mitchell digs down deep into heartbreak and discomfort—a hot beautiful mess. In one of her incarnations, Eliza confuses love with science. Audience members by the couple, hold each other as she journeys though a jungle of mixed emotions and fear of intimacy.

When her lover Watson professes feelings for Eliza, she is stunned and retreats into her tech-cave. Alas, technology was designed to be predictable which induces trust. Trusting tech is easy enough, when it upsets us we repair it—problem solved. Repair shops for broken hearts don’t exist. We empathize with Eliza’s reluctance about love.

However, easy connection can be a ploy: hospitality wait staff raise their voices an octave when greeting costumers. The two villainous Merricks use charisma to win acceptance as a politician and businessman. Human connection has evolved into habitual politeness, commercialism, and “customer service.” Madeleine George’s play shows why we turn to our technological devices for emotional validation.

Playwright George dares us to get our priorities straight. We cannot depend on technology for everything. The Watsons’ emotional intelligence (E.I.) is indeed a human trait that cannot be translated into metal or software code.  As cool as it is, technology can never replace people.

“The (curious case of the) Watson Intelligence” reflects our time. We need Watson! Watson is the connection between us—an endangered spirit. In fact, I would see the play again! Bravo and thank you, Shotgun Players.