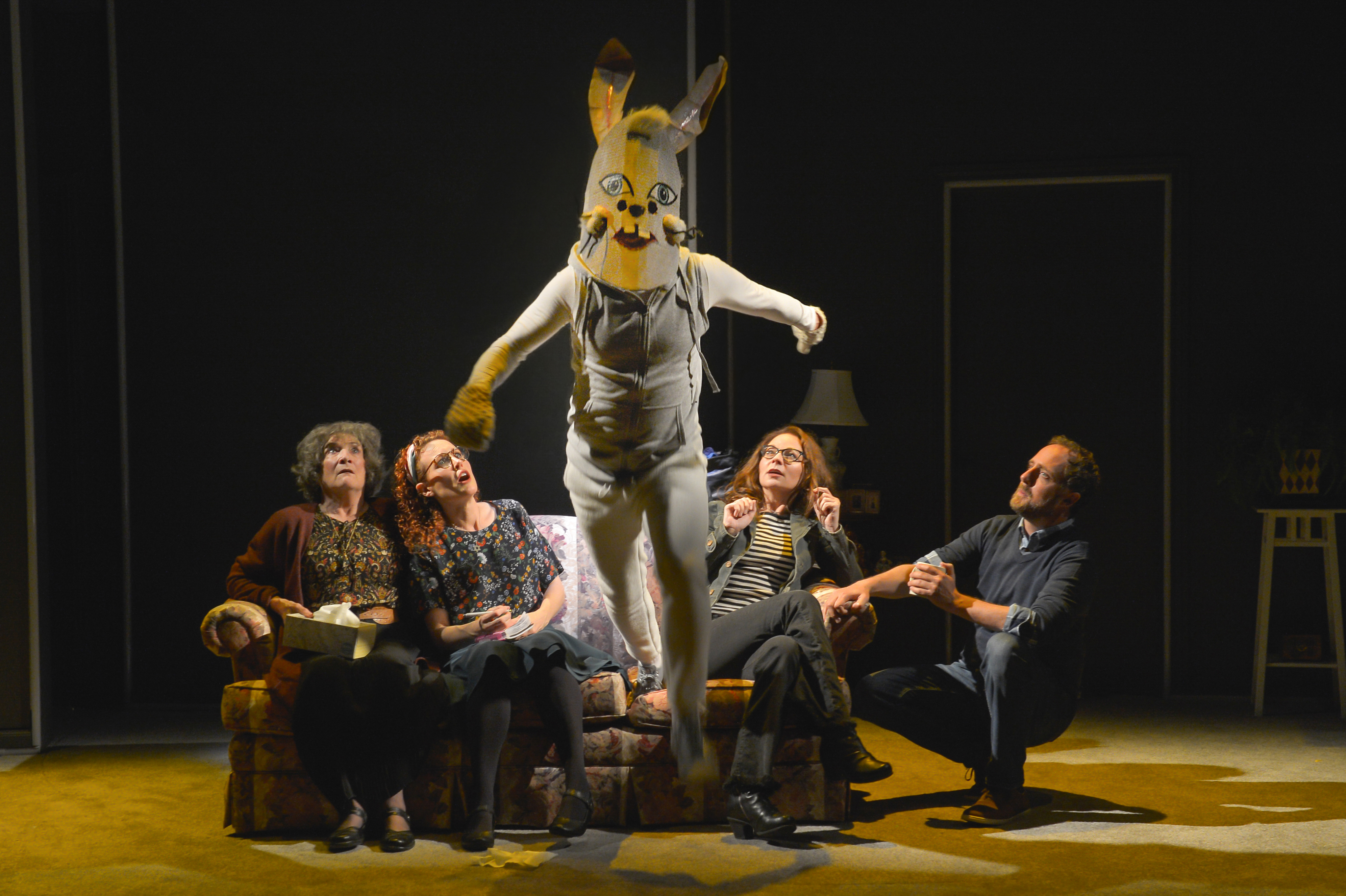 Coming of age alongside Daniel Handler’s A Series of Unfortunate Events, I grew to understand the complicated, dark nature of our lives. Handler’s new work “Imaginary Comforts, or The Story of the Ghost of the Dead Rabbit” explores the ways that stories define our lives, lingering in our minds and conversations with a comforting, yet haunting permanence. The masterful Berkeley Rep production has all the ingredients of a memorable show: brilliant actors, expert direction, and striking set design. But his comedy leaves us unchallenged, satisfying those who would like to sit back and enjoy 90 minutes, comfortably.

Naomi, who calls herself a “bad Rabbi,” is inexperienced and takes on the task with an earnest desperation. Naomi goes on a comically disastrous date with Clovis (fascinating Michael Goorjian), a recovering alcoholic. With each additional sip of sobering coffee, Clovis unfolds his unexpected connections to Sarah’s deceased father. Julian López-Morillas plays the mysterious father in touching, mysterious flashbacks.

The play centers around a comforting family story about the ghost of a dead rabbit, played in the flesh by the electric Danny Scheie. Like the rabbit story, our own stories express paradoxical emotions. Handler points out that even imaginary stories are valuable in their ability to comfort. The rabbit story helps the alcoholics stay sober, and helps Sarah remember her father’s warmth.

In short, our stories provide some stability, some hope. However, Handler restates this theme over and over during the 90 minutes. I was craving some interrogation of the real impact of this kind of comfort, an idea of its worth.

Sarah laughs and tells the story of her father’s funeral, terribly botched by the unprepared, anxious Rabbi. With her self-comforting story, she can selectively forget, and move on. But Handler ignores the fact that by telling this story, Sarah leaves out her own failures: she set up Rabbi Naomi for failure by giving her no useful information about her father. While comfort sometimes has value, comforting stories often lead us to over-simplify, to selectively remember and forget, and ultimately, become numb and complacent.

Although Handler is a master novelist, his dramatic side-project fails to be critical. A single queer character is riddled with misery, substance abuse, and promiscuity, the usual tiresome tropes. The audience laughs at all the right moments, but leaves without any unsettling new thoughts. As for pure comedy, Handler is completely successful. But I want more than just imaginary comforts. These days, I am hungry for accountability, truth, and growth, even when they are uncomfortable.

“Imaginary Comforts, or The Story of the Ghost of the Dead Rabbit” by Daniel Handler, directed by Tony Taccone, scenic design by Todd Rosenthal, at Berkeley Repertory Theatre, through Sunday, November 19, 2017. Info: berkeleyrep.org