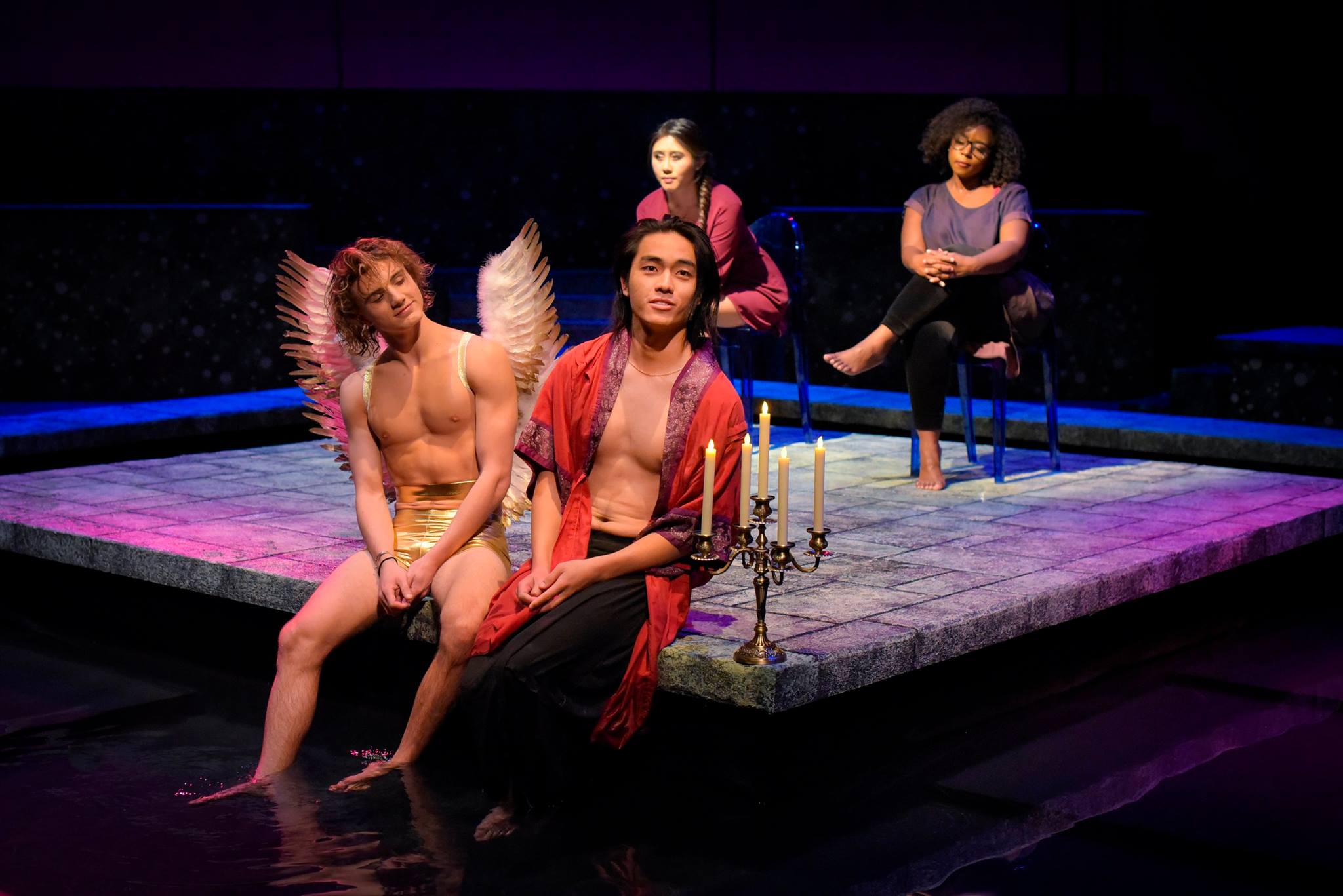 On a smoky, apocalyptic night, U.C. Berkeley’s Theater, Dance, and Performance Studies immersed us all in Mary Zimmerman’s spectacular swimming pool setting of Roman poet Ovid’s “Metamorphoses.” With Director Christopher Herold at the helm, we sail smoothly over the waters. At times jarring and soothing, the play depicts love’s magical transformations, illustrating the power of classic myths to draw out our emotions.

“Metamorphoses” makes a star out of the set, magnificently designed by the great Nina Ball. The action centers around a pool, with multiple platforms, contrasting the elements of water and land. The play addresses greed, passion, willful destruction, and life lessons taught by the Roman gods. Zimmerman, Herold, and Ball build a bridge between ancient and the modern, between time and space.

When the CAL student actors plunge underwater, as if drowning, we are reminded of the transition between life and death. Ovid’s stories of love change the Roman heroes into birds, or gods, or supernatural creatures. Even a comic King Midas (witty Alexander Espinosa Pieb) finds redemption. All kinds of love meet challenges and consummation here: Orpheus and Eurydice, father and daughter, gay lovers, too.

Floating in an inflatable swan, Phaeton (light-hearted Yohana Ansari-Thomas) is analyzed by his poolside shrink. When someone drowns, it is real water that does the drowning. Water contains the seeds of life, love, and death. The actors are magically transformed into water creatures, swimming and flying, under the influence of Eros, God of Love (elegant Zac Nachbar-Seckel).

Jack Carpenter lights the landscape from clarity to haziness and back again. The script varies from subtle to comic, transitions that underscore the theme of miraculous change. Director Christopher Herold’s actors display a wide range of emotions: humor, jealousy, hope, despair.

Best known is the story of Midas, who turns everything he touches into gold, which seems great for the greedy king. But then, his daughter jumps into his arms and turns to solid gold. Midas beseeches Bacchus to turn his daughter back to flesh, but Midas must travel the ends of the earth.

At least Midas gets a second chance, unlike our civilization which insists on making commodities of air, water, and land, leaving a petrified nature. In another striking environmental allegory, when Erysichthon cuts down a majestic tree, he is punished by the goddess Ceres with an insatiable hunger.

There is a strong dance element in this play, enhanced by Ian Thomas’ sound design. Herold has created an aesthetically appealing staging, while at the same time keeping the power of the words intact.

“Metamorphoses” reminds us that we are made of water, and that life calls for endless recycling, a return to the source. The superb setting, magical costumes, and super-talented young cast evoke thoughts on love and invite us to consider unexpected transformations.

See “Metamorphoses” this weekend, before it disappears into the air.