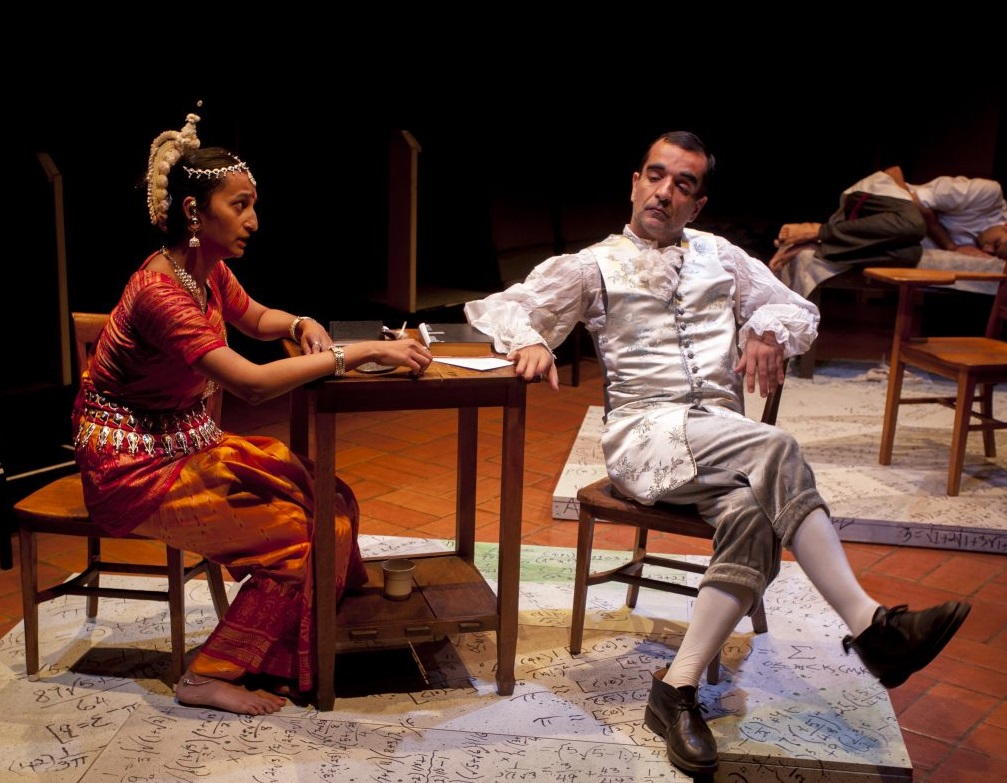 The struggle between Indian spirituality and English stubbornness comes to an intimate and exciting revelation, reflecting the Partition of India and the looming end of the British Empire. If the British understood their essentially racist role in India, they might have seen the beautiful contributions of a colonial people entirely unlike themselves.

When a brilliant young Indian mathematician arrives at a hostile Cambridge University in 1913, he is faced with all the imperial assumptions that snooty Englishmen can muster. “Partition” is based on the true story of Srinivasa Ramanujan, a rustic genius from the backwoods of India and G.H. Hardy, the math professor who invites him to England.

Essentially an academic love story, Hardy embodies a powerhouse of strict rules and regulations. The Englishman insists on forcing the Indian to adopt Western methods of proof. Although Ramanujan tries please Hardy, he cannot abandon his goddess-given insights.

Ramanujan (enthusiastic, endearing Heren Patel) wins us over by his humility and charm. Even though the renowned Brit has summoned the Indian because of his startling mathematical discoveries, Ramadujan’s methods defy Western comprehension.

Alan Coyne’s intense and gripping portrayal of Professor G.H. Hardy launches us on a conflicted emotional journey into obsession and self-denial. Hardy, wrapped in a tight tweed suit, is so uptight and repressed that he cannot embrace the submissive Indian. Coyne gives us a chilling portrait of a man who cannot bear even to look in a mirror!

In “Partition,” we feel the merging of personal and political forces. Director Bruce Coughran brilliantly contrasts Hardy’s rigidity to Ramanujan’s delicacy. We feel the rising tensions between the mentor and his disciple. Although they could make beautiful equations together, Hardy’s arrogance and Ramanujan’s timidity drive them apart.

As the innocent Indian sleeps in his white robe, his goddess comes to inspire him in visions, offering him rarified equations. Ramanujan’s personal goddess, Namagiri (spirited, graceful Avanthika Srinivasan) in her brilliant orange sari, dances, chants, and argues with her humble follower. The goddess, his only friend in England, puts new ideas and theorems into his dreams.

The dancing goddess mothers the genius mathematician, as he struggles with the cold English climate. And the ghost of Pierre de Fermat, a French mathematician (clever Carlo Aponte) adds comedy, as he sexually harasses the lovely goddess in dreams. Fermat and Namagiri, both spirits, struggle over the soul of Ramanujan.

“Partition” isn’t just about imperial England and colonial India in the early 20th century. It’s also about the inability of the West to understand or appreciate an immigrant’s insights. Instead of nurturing his unique colleague, Hardy oppresses him with harsh tasks and deadly Western “superiority.”

David Boyll makes a delightful Professor Alfred Billington, who tries to show Hardy how to express emotion. As we watch Hardy stifling his love for the suffering apprentice, we are reminded of another authoritarian, harsh boss who abuses apprentices.

The play asks a timely question about immigrants in an imperial setting: What keeps supposedly sophisticated Westerners from appreciating the genius of their colonial immigrants? “Partition” helps us ponder both the imperial and the colonial worlds, today.