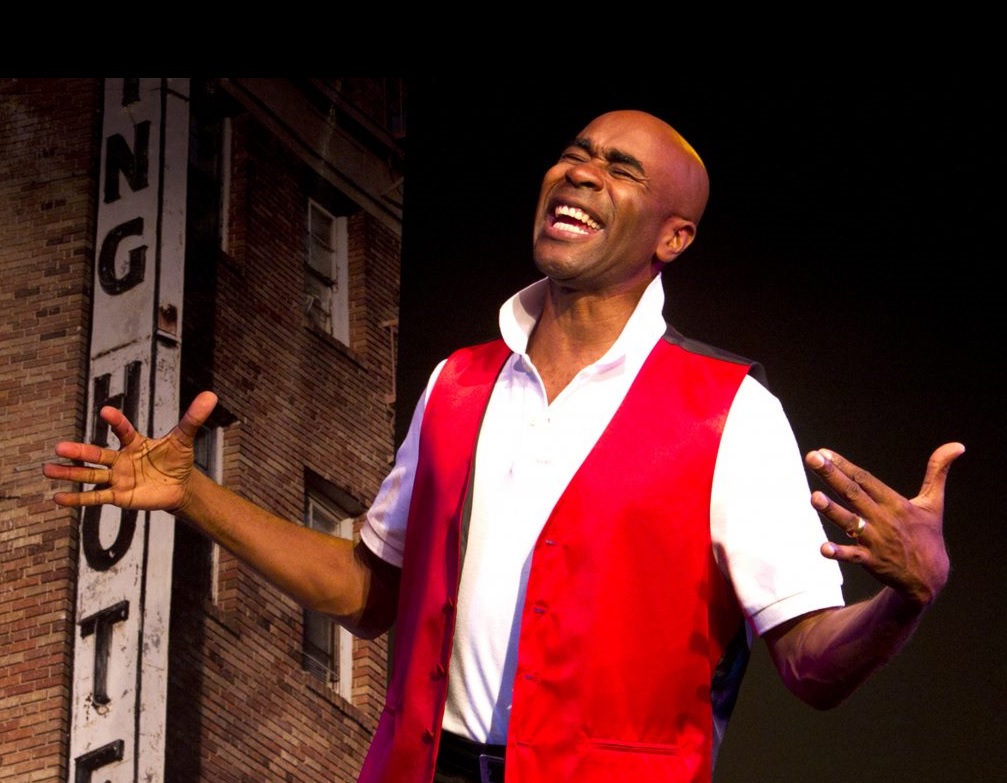 When Don Reed flashes his wide, welcoming smile, the whole room lights up. Now that he’s a well-known performer on TV and in movies in L.A., he comes up to The Marsh on weekends to weave his magic at home. In “Kipling Hotel: The 80’s,” he recreates the awkward Oakland kid, afflicted with nervous blinking.

Reed, a successful UCLA grad from the 80’s, has become a recognized actor and comedian, working with Jay Leno and Lin Manuel Miranda. But he hasn’t forgotten where he comes from—and he brings us fun, warmth, and hope, as he shares his funny show about working at The Kipling Hotel, as a college student. The son of a pimp in East Oakland, he is smart with a comedian’s touch—that warm smile, a quick wit, and the will to survive.

Reed can bend his rubbery, flexible features into any shape to create rich, hilarious characters. He imitates a cocaine-sniffing buddy’s “squirrel face,” a 90 year old Holocaust survivor’s stories, and an L.A. policeman who grabs the young man at a drug bust.

Reed says, “When I was like 20 years old, I got recruited to UCLA on a Speech and Debate scholarship—a partial scholarship. But nobody told me that “partial” scholarship, loosely translated, actually stands for “Not Enough Fuckin’ Money”!

When he first arrives at UCLA, he cannot afford a room. So, he couch-surfs at dorm parties, until students become suspicious. So, he moves onto the women’s bathroom’s “period” couch, living in fear of hearing: “Suzanne, there’s a Negro in the women’s restroom.”

So, Reed tries a gig as a Chocolate Chip Cookie and then tries to be a stripper. Finally, he finds work at the wrong end of Beverly Hills, working and living at the Kipling Hotel, a run-down home for old folks. Here, he learns to listen and understand the lives of people unlike himself. He learns to appreciate his own gifts by listening to the complaints of 80 and 90 year olds who have lessons to teach. Reed, the supreme mimic, brings warmth and compassion to all the wonderful people he recalls.

We have so much fun re-living those college days through the physical recreation of the youthful Reed. He dances, he becomes many people, and he befriends George, a Holocaust survivor. He bonds with George, skillfully resurrecting the Yiddish accent: “He plotzes in my seat. He’s giving me the shpilkes, this guy. This guy’s giving me the shpilkes.” Reed makes a place for himself at the Kipling Hotel, while powering through a UCLA degree.

We wonder what would happen to a sharp, smart guy from Oakland, today. How would he get through University, with these high tuition charges?

In the 80’s, part-time jobs could get you through school because huge student “loans” had not yet enslaved students. The University of California was FREE to everyone who could get admitted. I attended for years as a graduate student–and never paid a dime.

In fact, “tuition” is still BANNED by the State Constitution! But Ronald Reagan brought in tuition anyway—by naming it “fees”! Why isn’t that illegal?

Reagan’s real reason for cutting state funds and charging “fees” was to keep poor kids OUT of the Universities after the “revolts” of the 70s.  Don Reed and many others (including myself) would not be able to attend with the high rates, today.

When he finds himself in the wrong place or the wrong time, Don Reed adjusts like the smart Oakland youth he is, finding a way to thrive. Young people who see Reed’s show will be inspired by the way he makes starlight out of misfortune. Don Reed is a smash hit!

As Sammy Davis Jr. once said to him: “Dig Yourself!”