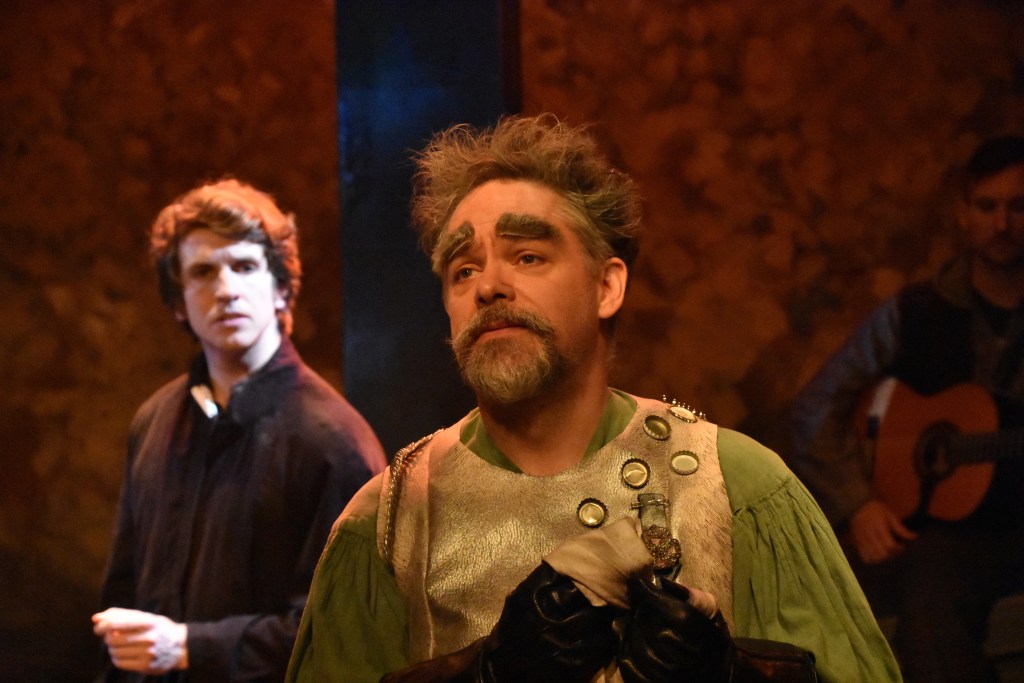 In the opening scene of “Man of La Mancha,” Miguel de Cervantes (striking Edward Hightower) transforms himself onstage from the aristocratic writer to the woeful Don Quixote in dress and manner. He quickly musses up his hair, and adds age lines, bushy eyebrows, and beard.  While his creation, Don Quixote, wears medieval faux armor and fake sword, the rest of the cast appear in modern dress, bridging the time gap between Cervantes’ 16th Century and today.

Put on trial by his thieving fellow inmates, Cervantes defends himself by putting on his play in the prison cell. Using the inmates as his characters, the jail becomes an inn and prisoners play waiters and guests. The Governor/Inn Keeper (noble Anthony Aranda) brings gravitas to both of his roles. As the Governor of the prisoners, he brings a droll fairness to a sham trial. Cervantes accepts the loss of his clothes, but rebels at the loss of his precious manuscript.

Theatergoers will be impressed with Custom Made Theatre’s rousing and moving “Man of La Mancha.” Under the witty direction of Brian Katz and the deft musical direction of Mark Dietrich, we are treated to one of the most endearing musicals in American theater.  Written in 1965 by Dale Wasserman, with music by Mitch Leigh and lyrics by Joe Darion, this musical continues to thrill with its message of hope and romance.

Set Designer Daniel Bilodeau magically transforms the compact stage into a squalid dungeon. Dark stone walls of gray and black cast a weighty gloom over Cervantes and the other prisoners of the Spanish Inquisition. And Lighting Designer Maxx Kurzunski sets the mood for comedic scenes.

Dietrich and Katz also cleverly employ the actors to play instruments: two guitars, a flute, a melodica, a Euphonium, and percussion. Fluidly moving between their dual roles, actor-musicians add intimacy and freshness to the action.

On cue, the lyrics of “To Dream the Impossible Dream” stir our imagination. Hightower’s powerful delivery reinforces the message that we can live a better life, despite the nay-sayers who advocate self-interest and selfishness.  The musical lacks the biting political commentary of Cervantes’ novel Don Quixote, with only slight reference to the Church that oppressed the writer. But “Man of La Mancha” still kindles our desire for a better world, inspiring us with hope.

Aldonza (dynamic Rachel Richman), both saucy and beguiling as the barmaid and prostitute, provides a strong musical counterpoint to the soaring solos of Don Quixote.  Contemptuous at first, Aldonza finally gives in to Don Q’s attention. She is deeply affected by his muscial profession of love in “Dulcinea.” Slowly, Aldonza responds to the appeal of a soul so pure of purpose.

Sancho Panza (lovable Dave Leon) does a brilliant job with his comedic singing and acting. Sancho answers Aldonza’s questioning of his loyalty in the heartfelt duet “I Really Like Him.” His affection for Quixote (and ours) may be summed up in his words: “Too much sanity may be madness—and maddest of all: to see life as it is, and not as it should be.”

The musical is a crowd pleaser and it is sure to attract Union Square visitors with its exuberance and family friendly plot.  “Man of La Mancha” brings a breath of fresh air to today’s chaos and political upheaval, admonishing us all to “dream the impossible dream.”