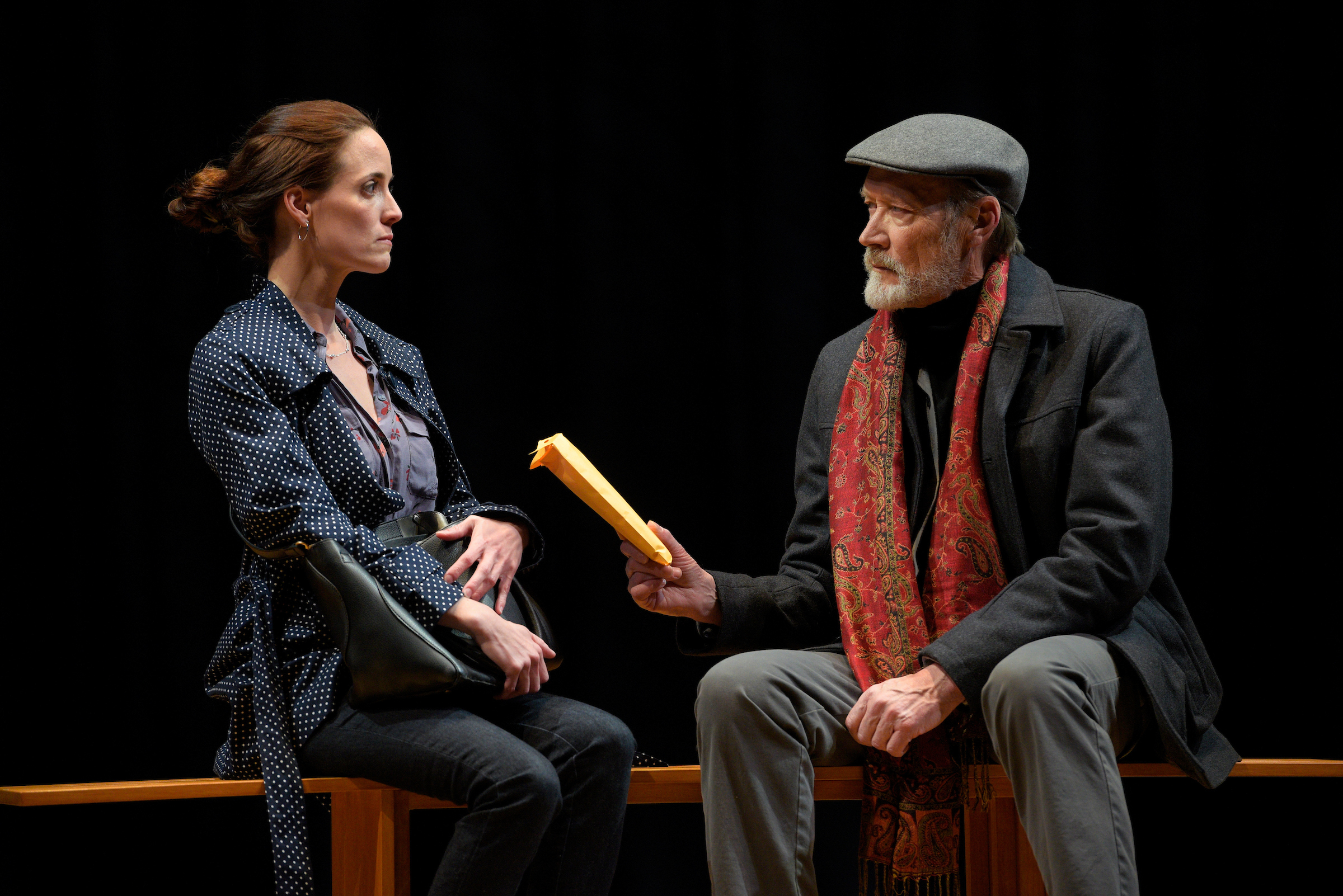 Riding on the London subway, a young woman impulsively kisses a much older man on the neck.

Can he trust her?

Can we trust them?

Simon Stephen’s “Heisenberg” has just two characters, Alex and Georgie, opposites in every way. They embark on an affair, a romance, but maybe one is a con artist—or maybe all of that. And more.

At 75, patient Alex (James Carpenter) works as a butcher, an Irish immigrant living in solitude in London. Alex is an intelligent man who hides his erudition, who wants to retire from his failing business. Georgie (Sarah Grace Wilson), 42, an American immigrant, describes herself as “Possibly winsome, maybe psychotic.” Yes, and the most honest liar you will ever meet.

For all their differences, they share both a propensity to swear, and histories of loss and need.

Early on Georgie asks Alex: “Do you find me exhausting but captivating?” Well, who would not? Sarah Grace Wilson’s Georgie is frenetic, self-contradicting, tactless—yet appealing. To make that work and be believable is extraordinary, but Wilson aces it.

Georgie and Alex’s words are often funny, always smart, but again and again the space between the words expresses as much. Carpenter must be the world master of the gaze that holds meaning, what can’t be said is nonetheless known: life is unfolding so pay attention.

Georgie surprises Alex with insults and lies. Alex surprises Georgie with his rigid routine, and then his deep, eclectic love of music. She reveals endlessly but not reliably. He reveals only with struggle.  Is she a danger, a threat? A lifeline? Or maybe all of that and more.

The empty floor of the big stage, the white soaring backdrops, focus all our attention on the confrontation between Alex and Georgie.  Playwright Simon Stevens insistence on a bare stage works. Wood blocks and planks serve as minimal props that the actors move and assemble themselves between scenes. They handle the pieces individually, separately, except once–when they assemble the bed the two will soon lie in.

Alex has learned hard lessons from life, but he has not let his losses disillusion him. He loves music, he reads, he knows beauty.  But can he accept the unpredictable in the form of Georgie?

He says definitively, angrily, early in the play: “I don’t feel, I fucking think.” By the end of the play, Georgie has changed that a bit.  Alex does not act without thinking it all through, but now he includes his heart, his needs, his love, when he acts. Time is limited.  Damn the consequences.

The title of the play comes from the name of the physicist who came up with the “Uncertainty Principle,” the idea that the position and the velocity of an object cannot both be measured exactly, at the same time, even in theory. Georgie puts it in more human terms: “If you watch something closely enough you realize you have no possible way of telling where it’s going or how fast it’s getting there.” She knows what Heisenberg did not: it applies to people as well as things.

My seatmate opined this is a play that explores power dynamics between a man and a woman. Okay, but it is also a play about the surprising turns a heart can take. Simon Stephens knows those turns of the heart fascinate. And bring us back to life.