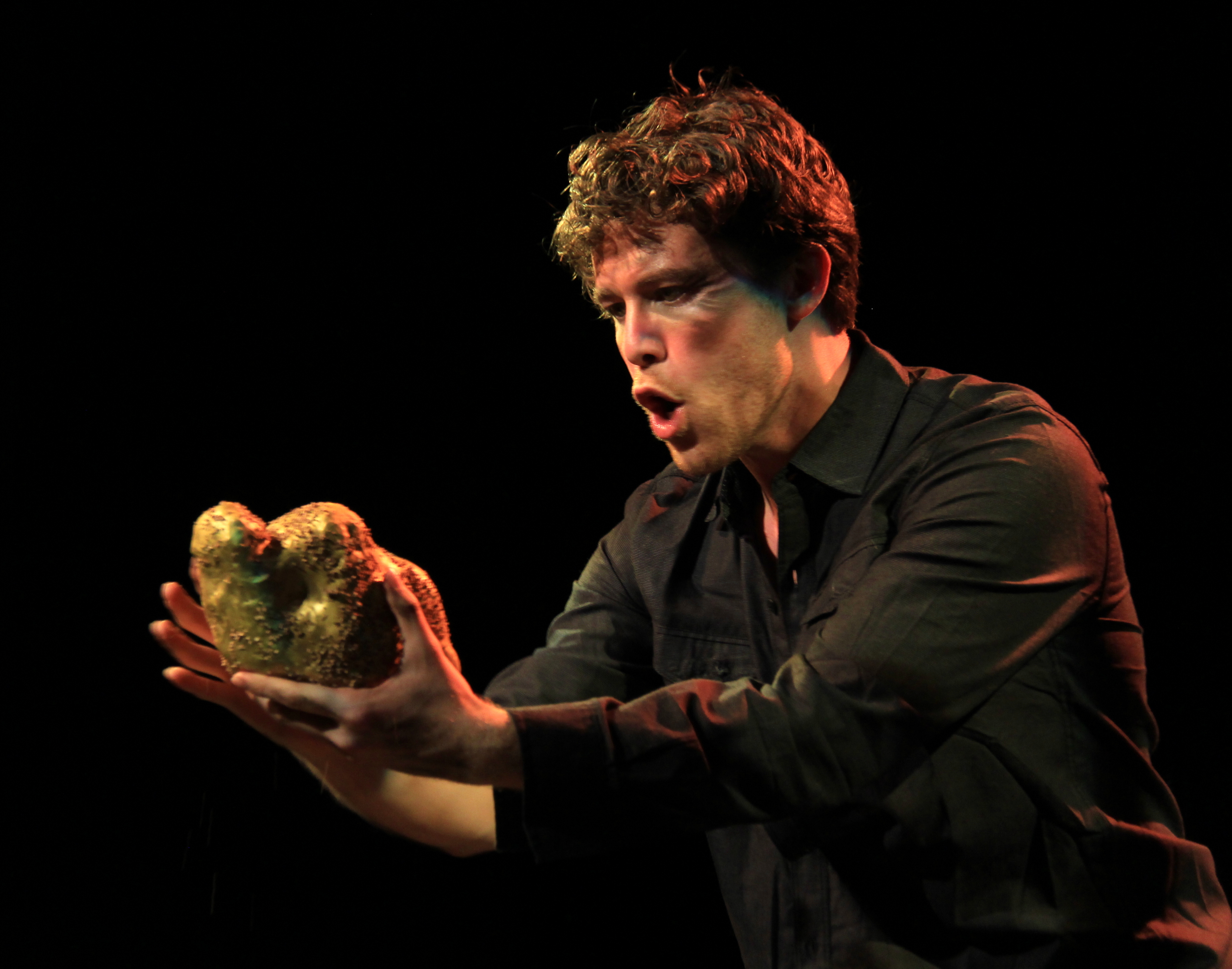 At first, like Leo DiCaprio in The Wolf of Wall Street, Timon stomps about the stage like a god on earth, reeking of self-importance and confidence: untouchable. But as Timon’s world begins to collapse, his hair goes wild. In a tizzy, he abandons his suits and round glasses in favor of squalor. Alone, he lives in a blue tarp tent, like the homeless Americans outside the theater, on the streets of the Tenderloin.

As Timon, Brennan Pickman-Thoon’s dynamite performance sets the pace for a grand group of actors. Masked and scantily clad women encircle the bros, as Timon dances center stage on a table. Pickman-Thoon’s energetic gyrations vibrate to the back rows.

Like an obnoxious, self-absorbed techie, Timon spends tons of money on lavish luxuries for himself and his greedy Athenian entourage. He is attended by Ventidius (tireless Douglas Nolan), a debt-dodging ex-con who speaks like a surfer dude;  Alcibiades (dashing Ed Berkeley), a disgruntled Captain; and Sempronius (commanding Radhika Rao), a proud, condescending lord.

Rob Melrose deftly directs his actors in modern accents and inflections, all the while preserving Shakespeare’s poetry.  Nolan also plays a senator with a southern twang whose country humor tickles our fancy. And Berkeley spits out iambic pentameter with buttery smoothness.

Timon and his gang toast each other with the Japanese salute “kanpai” over sake and sushi trays. Timon ups the ante and splurges on high-class escorts to the delight of his buds. His drunken, delirious band of merrymakers break into a dance number that rocks the theater.

Time slows down as Apemantus (haunting David Sinaiko) denounces the possy’s debauchery. The dancers slow down and frame their cheery faces with their hands, becoming eerie moving portraits. Even the music crawls to a strung-out snail’s pace as Apemantus levies his judgement on the revelers. He makes us feel anxious about the fallout that will surely follow such excess.

When Timon’s spending spree finally reaches its limit, his servant Flavius (sweetheart Courtney Walsh) delivers news of his financial ruin on an ipad. The CRASH finally comes to Silicon Valley!  Timon’s sniveling servants sport bluetooths drooping from their ears and google glasses hanging from their eyes, as they pack their belonging into cardboard boxes.

The whirr of ambulances passing Cutting Ball Theater adds authenticity to Rob Melrose’s den of vice. Timon sinks ever deeper into a melancholy mash-up of classical Athens, Renaissance England, and today’s San Francisco. The wail of the sirens unnerves us.

If this tale makes fun of wealth and excess, why does the philosophical beggar, Apemantus, dine with Timon and his friends at the height of their outrageous consumption? Never have I seen a rich man dine with a poor man in such an extravagant setting. While Timon meditates on the evils of money, outside the theater overdosed drug addicts are being carted to the hospital.

While we laugh at spoiled Timon’s self-inflicted pain, people starve in doorways. Timon dares to sneer at the audience because we also turn our heads from the beggars on Taylor Street.

Cutting Ball delivers an explosive combination of accents, costumes, and props to create a world of corruption and greed. “Timon of Athens” succeeds in turning our heads from the spectacle onstage to the street outside. As we exit the Exit Theatre, we see and hear Apemantus all around.