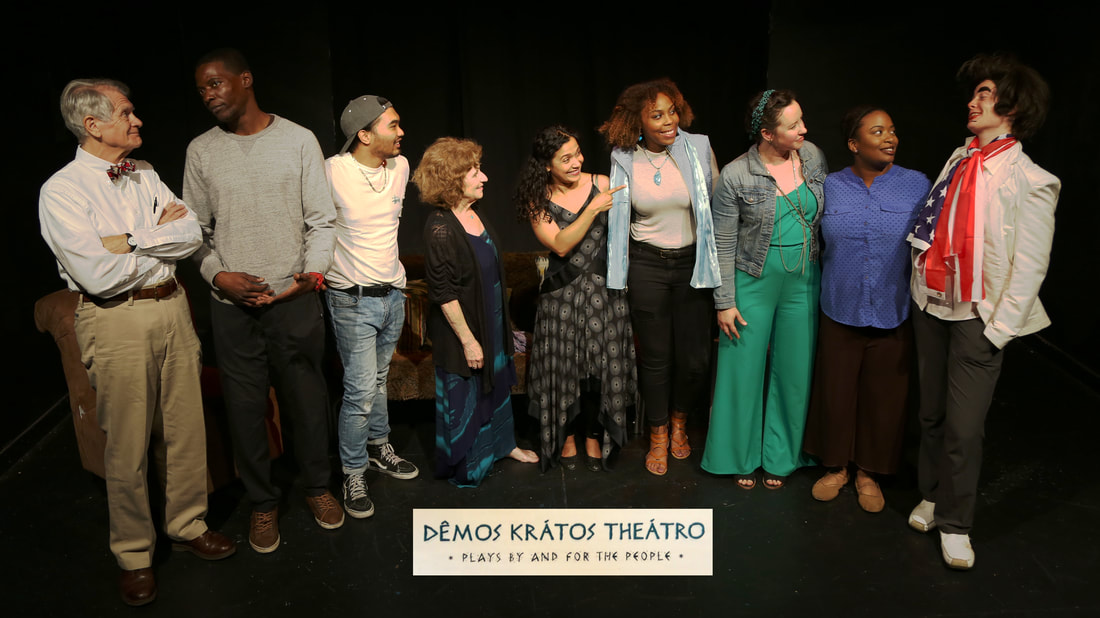 Unassuming Lauren Mayer, carries on an awkward little piano, astounding us with brilliant, side-splitting lyrics with a leftie bite. Mayer, a comedic shark disguised as a middle-aged suburban house wife, belts out songs about hiring more women. She makes fun of the current “war on facts” with knife-like wit. Mayer is no stranger to the Resistance: she recently became a viral hit with 2.7 million views for her “Sexual Harassment Prevention Song.”

Utopia Theatre Project creates connections to the actors. Talented, uproarious Amelia Adams wanders on as “Sal Monella,” a newly minted political candidate. Adams’ brilliant physical comedy depicts a politician who stands only for power via corruption. Adams asks us to shout out a campaign platform to shape her absurd persona.

Stamps later teams up with veteran Bay Area actor Richard Farrell in Kenneth Heaton’s “The Polling Place,” a haunting, futuristic look at voter suppression. Stamps and Farrell sow a raw, chilling confusion that pokes at our apathy. Like a “Twilight Zone” episode, the dialogue offers laughs, then a deeper resonance.

Howard Johnson, Jr. gives a fabulous performance as Bro in Cleavon Smith’s striking “On the Precipice.” Johnson depicts “a day in a life” of an apathetic voter with precise, chilling realism. Raptly, we join him—listening to jazz, smoking dope, eating Girl Scout cookies—while he forgets to vote. With an all too easy shoulder shrug, Bro complacently dismisses the idea of voting.