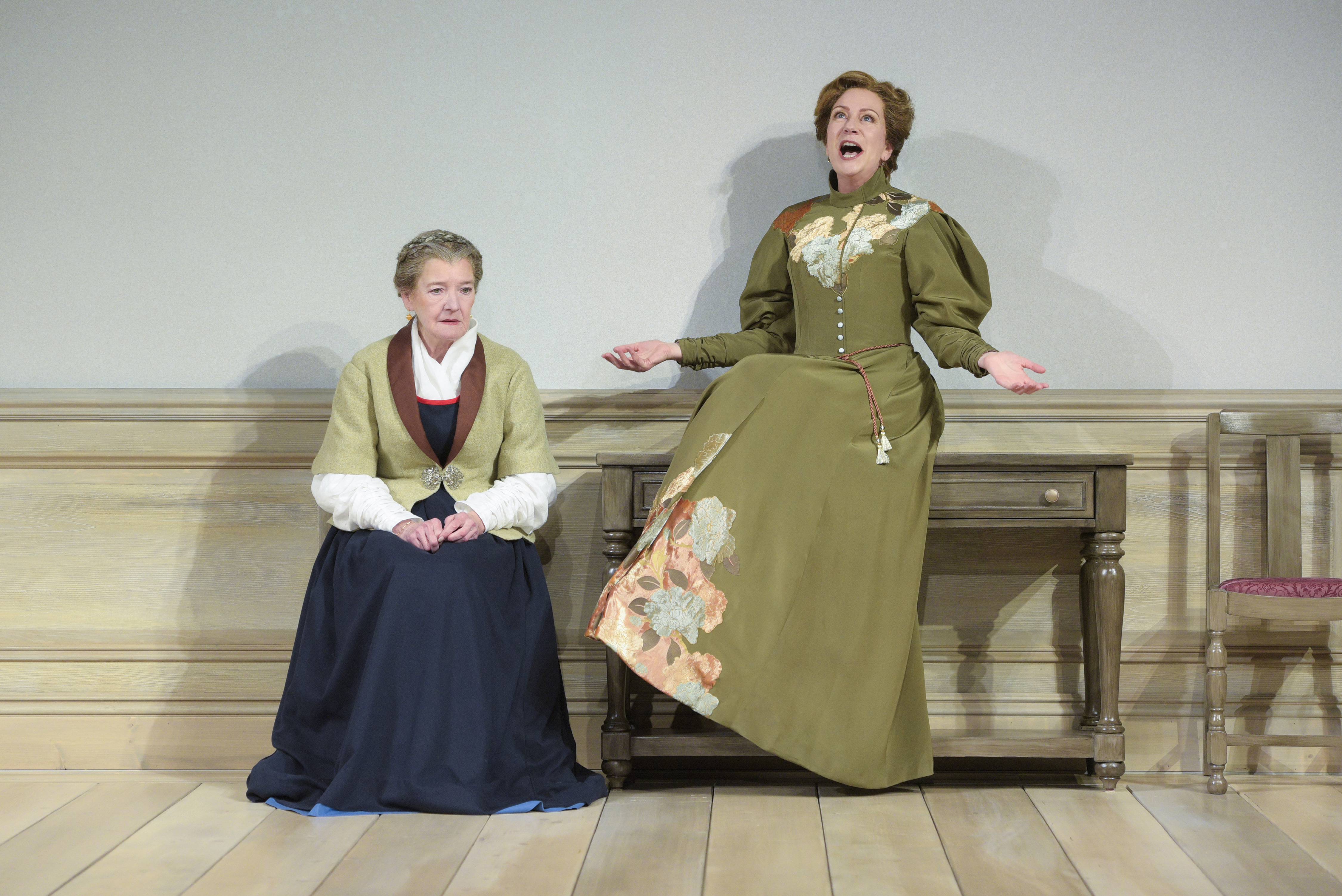 When in the history of plays has a young writer taken on a hundred plus years old classic and written a “Part 2”? The audacity of Lucas Hnath’s undertaking is only outweighed by his stellar, modern take in “A Doll’s House, Part 2.”  Norwegian Henrik Ibsen must be applauding from Playwright Heaven.

When the issue of whether Nora and Torvald are legally divorced comes up, we are challenged again on women’s rights. Is the world still that backwards? Can Nora ever extricate herself from male oppression? Can Torvald act generously, at last?

Everything about Hnath’s play opposes the realism of Ibsen’s 1879 “A Doll’s House.” Andrew Boyce’s stark set has four characters rattling around in a immense room—with only one table and two uncomfortable chairs. The beamed ceiling is impossibly high—and there’s one door only—the famous door through which Nora Helmer exited, leaving her husband and children—scandalizing the bourgeois world.

We are shocked and amused by the confrontation and manipulation of the older housekeeper Anne-Marie (terrific Nancy E. Carroll), who raised Nora’s daughter. Anne-Marie insists on Nora’s selfish and self-centered choices. Anne-Marie makes us understand the price she, too, has paid for Nora’s exit. They are funny as they feud, setting a grotesque tone for Hnath’s brilliantly written revised classic.

Hnath employs dark comedy while debating serious issues—an echo chamber of arguments, outdated ideas, and startling issues—that leave us gasping with wonder and laughter. Hnath succeeds in gripping us with mystery, embedded in brave personalities that leave us in wonder. Nora remains the modern woman, ahead of her time. She can make the roof fly off that enormous room.

Fisher’s Nora is commanding, honest, and incisive—we can feel her thinking and feeling in front of us, compelling us to follow her struggle, as she recounts what she’s been through in the last fifteen years. She makes Nora intriguing and fearful—a wondrous combination.

When Torvald bustles into the antiseptic room, full of business and brashness, we brace for a clash—but it’s not what we expect. Once again, Hnath pulls rabbits out of hats. Judd turns Torvald into a clown, an injured man, and a surprising human being. Hnath probes the depths of a stock villain to examine comic revelations about his life post-Nora.

Judd makes magic from Torvald’s turns of mind, as he grips us with his wild eyes and signature smirk. Judd and Fisher make a monstrous modern pairing that soars to new heights with Hnath’s version of the feminist apocalypse.

Finally, the frosting on this rich and rewarding cake is Emmy (elegant Nikki Massoud), who springs another surprise. Emmy upsets everyone’s expectations with her logical expectations of modern life. She wants the life her mother rejected—her right and her legacy.