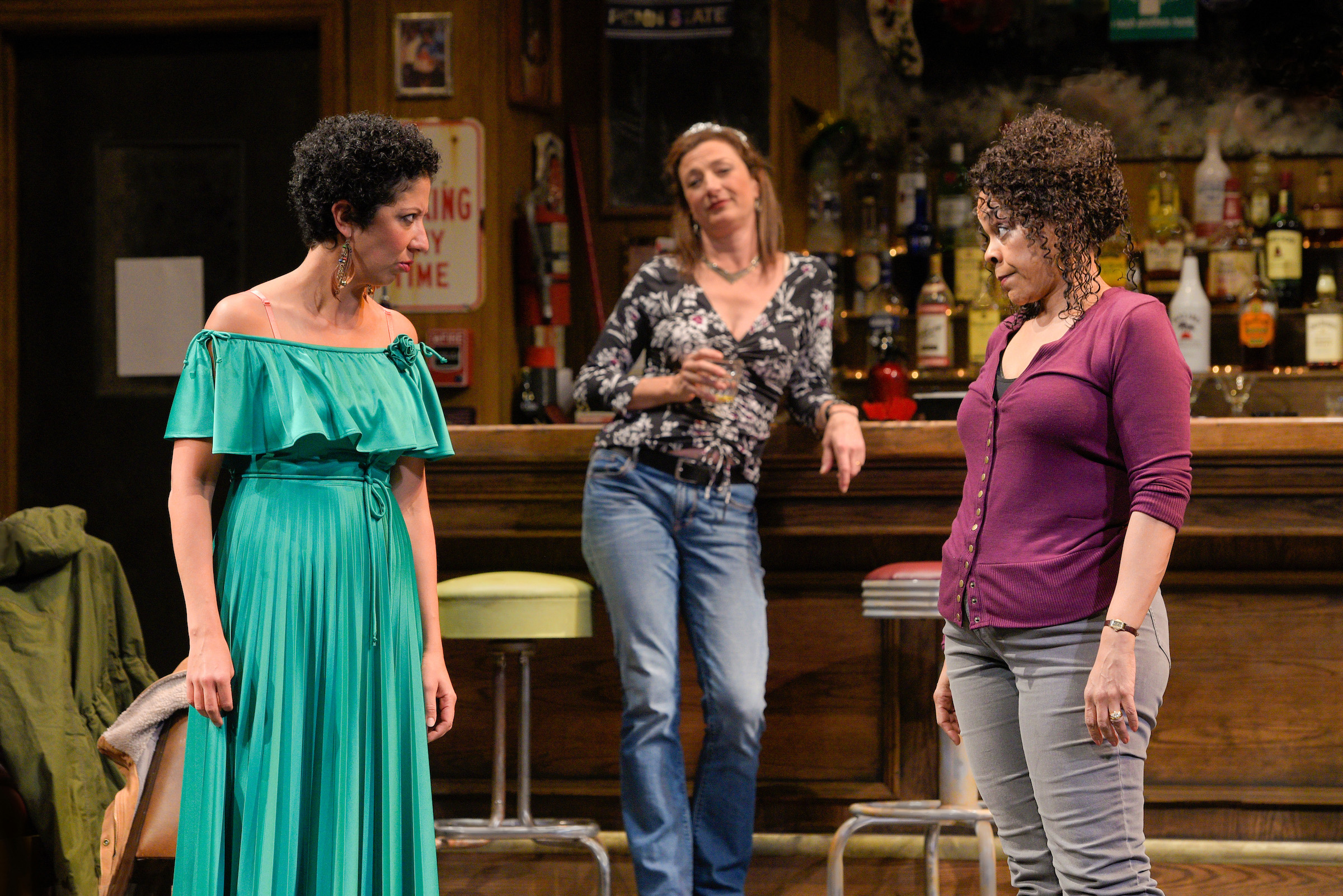 Steel-workers celebrate a birthday, getting trashed at the local homey bar, to forget thier decades of back-breaking work on the factory floor. Tracey (explosive Lise Bruneau) and Cynthia (soul-stirring Tonye Patano), their sons, and their husbands, have worked for Olstead Steel for generations. The factory provides income and a life-long sense of identity for these workers, who start at 18 and work until they drop.

As signs flash the months of 2000, Tracey and Cynthia, and their frustrated, restless sons, Jason (impressive David Darrow) and Chris (inspiring Kadeem Ali Harris), hear rumors that Olstead will relocate to Mexico. They fear losing their livelihood and identities. The bartender Stan (paternal Rod Gnapp) walks with a painful limp. Stan was crippled on the line, years ago. He warns that the NAFTA agreement will allow the plant to pick up and move anytime.

If the factory goes, the town will fall into decay—like many others in the Midwest. Nottage deftly uses her first-hand research in the dying steel town of Reading, rooting the dynamic drama in the family traditions of steel workers. By focusing on Tracey and Cynthia’s threatened families and friendships, Nottage reveals how remote corporations pit Black against White against Latino. High drama springs from the revelation of how the mill holds an iron grip on its struggling workers.

The hard-working Colombian bar-keep Oscar (earnest Jed Parsario) is ostracized for his race and an unforgivable transgression. Like a ghost, Oscar floats through scenes, his presence expressing low pay–low man on the totem pole. Parsario fuels Oscar with boyish charm and electricity, with a big pay-off at the end.

As their jobs fade, friendship and marriages go downhill. Sore backs and sweat-drenched clothes signify their loyalty to the job. What they receive in return is betrayal and despair. Cynthia’s husband Brucie (enthralling Chiké Johnson) gets fired and descends into terrible addiction. Johnson brings Brucie alive, intensely and quietly, setting high stakes for life and drama.

The impressive opening scene in a parole office in 2008 shines bright interrogation lights in our faces, blinding us. In that initial flash-forward, Chris and Jason explain themselves movingly to their street-wise parole officer Evan (subtle Adrian Roberts). From the start, Lynn Nottage lets us know that their path is downwards—a terrible event has changed them all, profoundly.

The bright lights direct us inward: Does the American Dream exist? Have we all been trumped?

With her second Pulitzer prize play, Lynn Nottage speaks for the Other America and explores the forces that twist the lives of U.S. workers. Her voice is clear, lyrical, and tender. “Sweat” is a beautiful and gripping masterpiece. Well worth seeing again!