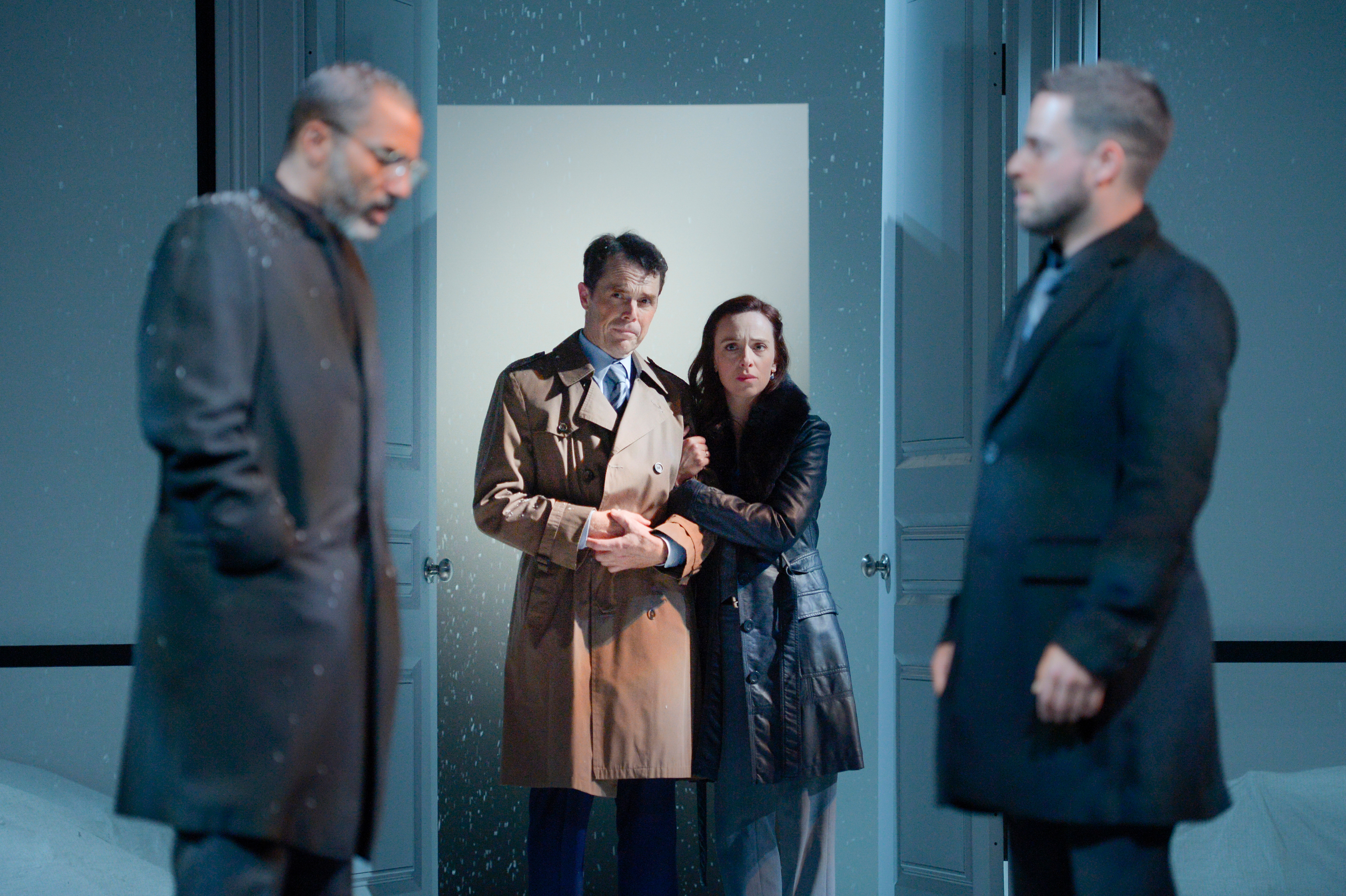 In “Oslo,” a spectacular docudrama about the Palestine/Israeli negotiations in 1993, J.T. Rogers inserts friendly, funny scenes of congenial tea drinking and waffle sharing. Marin Theatre Company shows how the peace process was started by a Norwegian husband and wife team, played impeccably by Mark Anderson Phillips and Erica Sullivan. She works for the Norwegian Foreign Minister and he’s an idealistic sociologist, who play sharply contrasting roles in an intellectual duet.

If not for Terje Rod-Larsen (charming, clever Phillips) there would be no Oslo Accords. But his wife, diplomat Mona Juul (elegant, thoughtful Sullivan) keeps telling him: “It’s not about you.”  Is he so egotistical that his idea about gradual meetings must fail?  Terje stands up against brutal professional diplomats. He makes their arrogance look silly; he adds an informal, human touch. Mark Anderson Phillips evokes my sympathy for Terje–playing a unique and unforgiving role.

“Oslo” asks, “Is diplomacy driven by facts or personalities?” We see little of the actual negotiations but instead wonderful personal moments that bring PLO and Israelis together over Norwegian waffles. As Terje works them up the totem pole of diplomacy, the two sides talk about their grandchildren and their homes.  Rogers slowly reveals Terje’s more humane, gradual negotiating style.

Amiable Terje has a theory about getting warring parties together in a room. Starting with lower ranked non-diplomats, he avoids bringing in the top dogs until they make real progress. He breaks all the rules of diplomacy.

Mona Juul’s husband generates ideas but she makes it happen with her Rolodex. As an assistant to the new Norwegian Foreign Minister, she explains that she’s riskng her job by keeping these secrets. At the same time, we know that she must continue the experiment for the slim chance of peace.

The high level Israeli negotiator pushes Terje around, which makes me sympathize with Terje. They treat him roughly once he gets the attention of aggressive Israeli diplomat Uri Savir (militant Paris Hunter Paul). Uri even degrades Terje in front of the Palestinian minister. They treat Terje like a rag doll who serves their slightest whims.

Terje manages, with his wife’s help, to bring together the sensitive Palestinian Ahmed Qurie (impressive, witty J Paul Nicholas), PLO second in command, with his Israeli counterpart. Nicholas provides delightful humanity and warmth in an outstanding performance as the inspired Palestinian negotiator.

Although even his wife warns him about his “ego,” Terje maintains a fine balance and cleverness. He is the man who sees possibilities. He says, “Look not where we are but see how far we have come.”  Touchingly, he plays his final hand from the back row, evoking our sympathy as the others assemble in a stirring documentary finale. At least Terje has the last words: “And how much further we can go, there on the horizon, do you see it?”

“Oslo” demonstrates how lonely it can be to have a big idea.