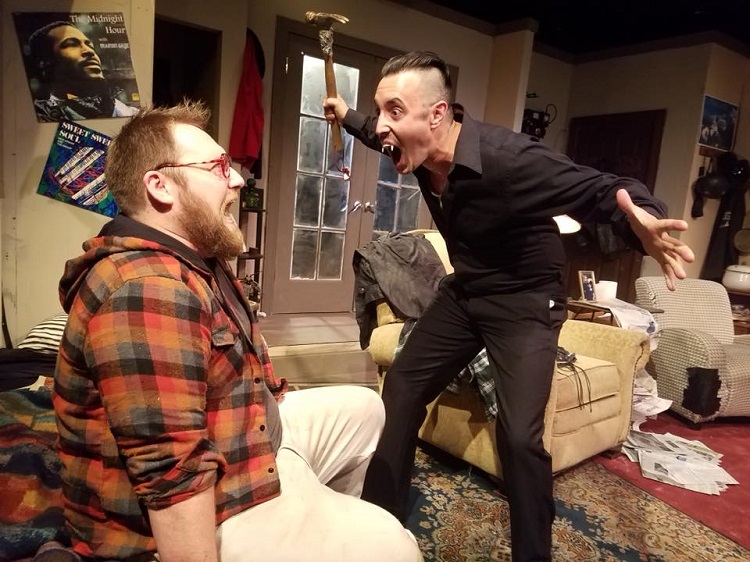 Conor McPherson Infuses Down & Out with Poetry & Grace

Conor McPherson’s beautiful, award-winning “The Night Alive” steals a glimpse at five broken lives in modern Dublin. Intimately set in the filthy rented room of 50-ish Tommy (superb Anthony Abateʹ), we get an in-your-face look at how far he has fallen. A divorced father of two, Tommy lives in a disgusting dorm room in his uncle’s house.

Immediately, Director Lear assaults our senses with a visceral shock. Tommy rescues a beaten up young woman Aimee (outstanding Ivy Rose Miller), who has blood pouring down her face. Miller’s well-crafted portrayal combines street-wise grit and quiet vulnerability. When Tommy brings her home, bloodied by her pimp/boyfriend, he lets Aimee claim her assailant was “just some guy.” The two strike up an awkward, yet comfortable intimacy.

When Tommy’s dim-witted, occasional roommate Doc (Kevin Bordi) shows up, we continue to see Tommy’s softer side. Bordi masterfully embodies Doc’s Forest Gump simplicity and depth—with a sunny outlook. Tommy protects Doc in a brain vs. brawn dynamic. He explains, “Doc gets things five to ten minutes later than everyone else.” Abateʹ makes Tommy’s failures fade, focusing us on his compassion.

When Tommy’s verbally abusive uncle Maurice (venerable John Craven) delivers his daily ration of insults, our compassion broadens into sympathy. Maurice is broken by guilt over his wife’s accidental death. Conor McPherson’s misfits circle the drain. We sympathize with the suffering onstage and outside in the streets.

We enjoy a brief reprieve─a fleeting moment of joy when our outcasts break into song and dance to Marin Gaye’s “What’s Going On.” As the song sweetly winds down, we realize the song is asking us: What is going on?

McPherson takes the mood darker with a scene of supernatural horror, shocking us with violence. He proves that people with nothing to lose can always lose more…

Light returns in the second act offering a tender sense of renewal and fragility. There’s no redemption here. These characters don’t need to be redeemed. Their lives are shitty; they’ve been dealt bad hands. Perhaps they could have made better choices, but their lives move on.