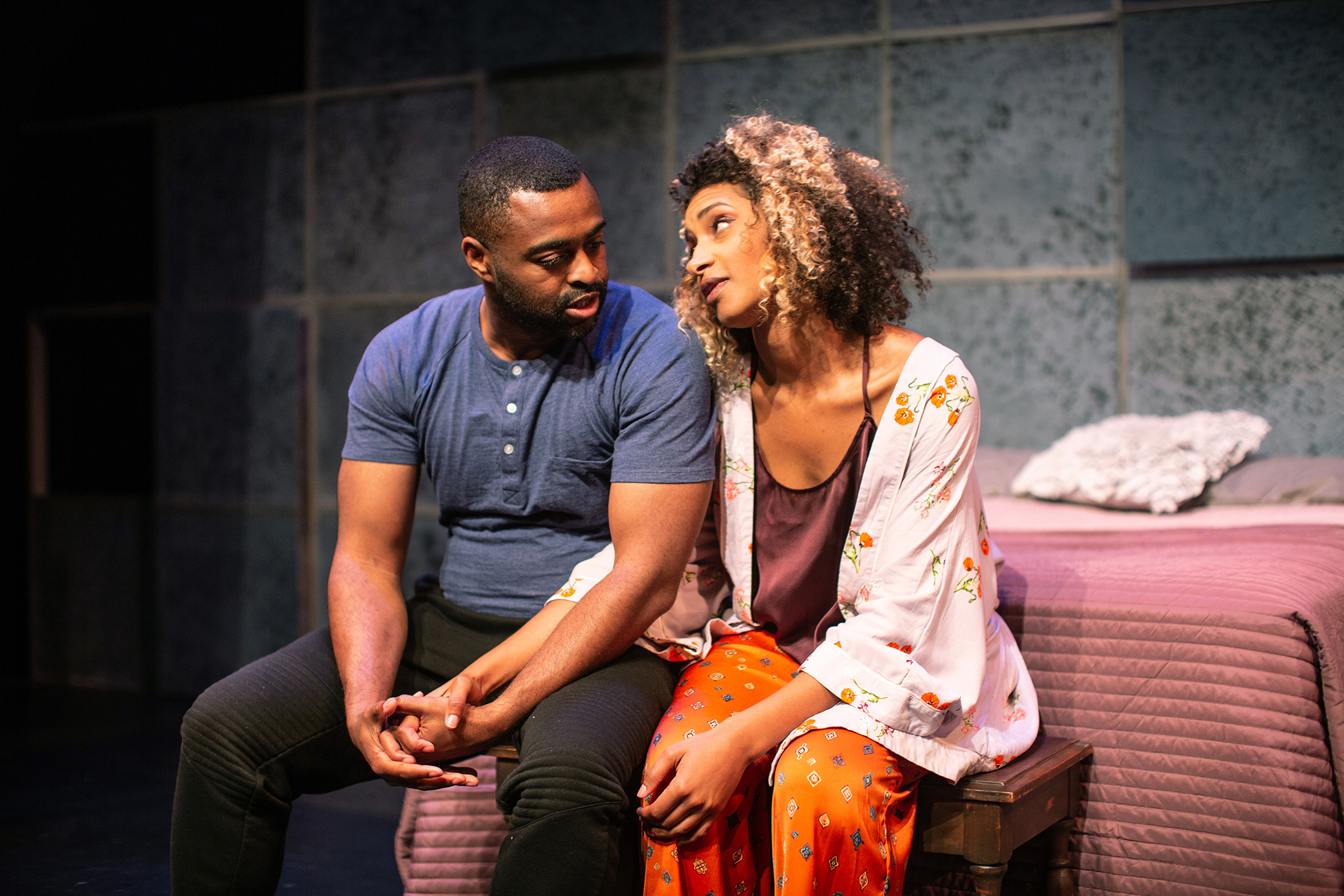 “Graveyard Shift” shows us just how awkward it is for us “all to just get along.” We see a Black couple from Chicago and a White couple from Texas–both dancing to Bobby Schmurda’s gangsta song “Hot Nigga.” Playwright Korde Arrington Tuttle is toying with my mind, and his odd style reels me in.

When I see the two White police officers, Elise (innocent Amanda Farbstein) and Brian (sulking Max Carpenter) singing lines like these, I get confused:

Mitch caught a body ’bout a week ago
Fuck with us and then we tweaking, ho
Run up on that nigga get to squeezing, ho
(Bobby Shmurda)

Mitch murdered someone about a week ago.
If you fuck with us then we will freak out on you, whore!
Mitch ambushed that dude and squeezed the trigger.

Why are these officers singing about the people they arrest? When I think about that moment, another song comes to me: “They don’t really care about us” by Michael Jackson. I felt threatened when the “PO-POs” sang the song…but I enjoy it anyway. Tuttle is inspired by the 2014 Sandra Bland case in Texas, where Bland died mysteriously in her jail cell. In Tuttle’s play, P.O. Brian claims, “It wasn’t my fault, it was her fault.”

The Black couple from Chicago, Janelle (animated Sam Jackson) and Kane (lyrical Rondrell McCormick) sing, “I’ve been selling crack since the 5th grade.” The song is not really about drugs, it’ s about their grooving to a gangsta song—part of their culture.

How strange is it that the police enjoy a nice gangsta tune, as well?

Playwright Tuttle plays with our senses, using urban poetic rhythms. McCormick rides the rhythm with such grace, action and emotion that I get goosebumps. When Kane confesses his love to long distance girlfriend Janelle, I swoon. His monologue could be a stand-alone poem called “Distance.”

Even though Janelle and Kane seem to be driving together from Chicago to Prairie view Texas, sometime they are actually talking on the phone. Two conversations go on at the same time, but they fail to mesh well together. The split staging makes me wonder what’s going on.

Brian, on probation for violence against a black college student, has to endure his cranky boss, Trish (sassy Gwen Loeb), who rags him. And he is married mooning over Elise. Brian labels himself “a fuck up.” The drama finally begins when his probation is over and he’s back exercising his P.O. power.

When Brian pulls Janelle over, she nervously lights a cigarette. Brian accusingly asks her why she looks so agitated, and Janelle does the unthinkable: She tells him the truth. My heart stops when I hear her growl, “You feel good about herself, now—harassing a woman?”

In Chicago, Janelle says “being strong is not an achievement, it’s an inheritance.” A Black woman’s independence serves as ger survival tactic. But her independence makes a man feel useless.

In Texas, Elise rips herself away from her married lover Brian. She exclaims, “I want me for me!” Many American women would applaud her, but I simply welcome her to my life. In “Graveyard Shift,” empowerment becomes a death sentence for a Black woman.

We march about Black Lives Matter in response to the murders  of our Brown and Black men. But Tuttle reveals the Black girl version of the #metoo movement. “Ain’t I a Woman?”