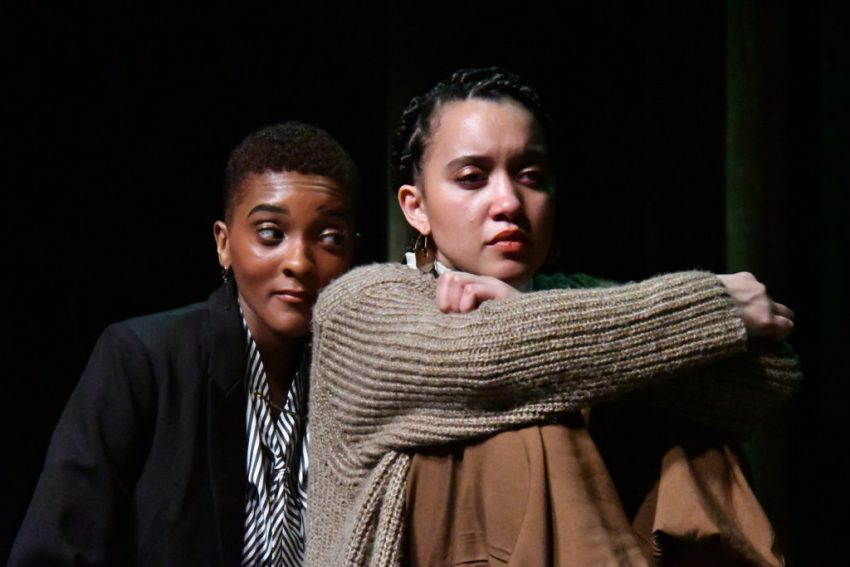 TheatreFirst’s “The Last Sermon of Sister Imani” introduces a new topic: artivism (art+activism). What is Black America discussing during Happy Hour? We debate whether to spend extra energy fighting the system, or to focus that energy on self-care and ignore America.

Scenes quickly flash from their past rap star life to their present feuding, highlighting Solèy and Williams’ superb acting chops. The sparse stage forces us to focus on the actors and words, like an open mic. Only lighting and sound effects signal their location, with green lights and chirping birds for a pastoral funeral.

In her office, Afro-centric Danielle wears cowry shells around her waist, with a beautiful braided bun. She accuses Adrien of practicing shallow, selfish politics. Danielle wants to live in her Zen bubble because her own country hates people who look like her. She needs to heal herself before she can heal others. As activist- poet Audre Lorde advises, “Self-care is an act of political warfare.”

In a slick sports jacket, Adrien defends her service, but Danielle stares her down with cold eyes. But Adrien’s direct action is stronger than Danielle’s withdrawal. Adrian smiles slightly and shakes her head, with compassion; while the African goddess tries to demoralize her.

When I see Adrien’s earnest eyes pleading for her friend to join the fight, I feel the call to action, myself. I understand Adrien’s drive for change and results, while Danielle retreats. When I watch the two women debate, I realize that they both of them live inside me—I don’t have to choose sides.

Cleavon Smith shows that his “New Negro 2.0” movement needs more than political warriors. Some of us can still fight for freedom as healers, workers, and business women.

Being Black in the 21st century means balancing your pain and duty. Thank you TheatreFirst for inviting the rest of the world to sit at the Black table during Happy Hour. It’s just getting started. We have a lot to unpack.

For more on Black Lives in America, see: The Root–Black Opinions, Politics and Culture
https://www.theroot.com