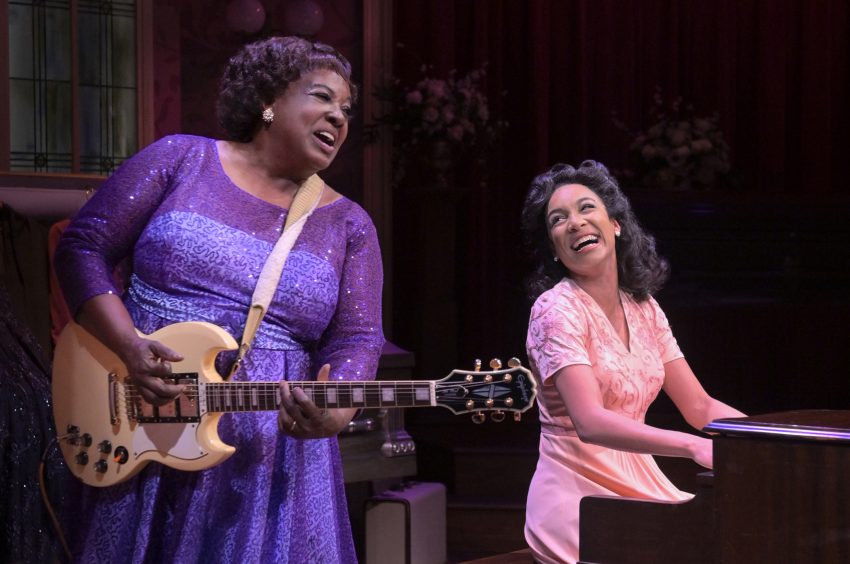 Michelle E. Jordan is a powerhouse in the role of Rosetta Tharpe. Her dynamism, her conviction, and her obvious faith all come through strongly. When Marie questions her about the naughty side of her music, Rosetta retorts, “I’m all right with God!” Irrepressible and rebellious, Rosetta Tharpe deserves the title “Godmother of Rock & Roll.”

They live and practice in the funeral parlor because they cannot stay in the whites-only hotels. Besides, the parlor has a piano and they can sleep in the coffins. The set is flanked by tall stained-glass windows and the walls covered in red-gold floral patterned wall paper.

Playwright George Brant focuses on the 50s, the most important chapter of Rosetta’s career—her partnership with Marie Knight (gorgeous Marissa Rudd). Right from the start, Rosetta is telling Marie that she needs to tell the truth. pulling no punches. Rosetta admits that she likes not only Marie’s voice, but her looks.

The music is spectacular, and we are treated to thirteen of the biggest hits of Marie and Rosetta’s career. For lovers of musical history, we witness Rosetta’s innovations, incorporating electric guitar into Gospel. Rosetta defends her playing in the clubs by stating she will find more sinners in the bars than Mahalia finds in church.

The limited dialogue between songs restricts their character development. Although we learn that Marie and Rosetta were raised in the Pentecostal tradition, their lesbian connection is only revealed in double entendre. As a shy, inexperienced singer, Marie has trouble even admitting she is married. Except for a telling kiss, Brant avoids telling the story of their love affair.

Although We never doubt Rosetta’s belief in the sacredness of her music, we are left to wonder how she balances the secular and sacred in music and in life. Daringly, Rosetta and Marie sing two of  Rosetta’s early risqué songs: “Tall Skinny Papa” and “Four, Five Times,” exuberantly.

All the songs in the program are a joy to hear. Jordan and Rudd harmonize beautifully in exquisite passages. As a guitar player, I found the Jordan’s mimicking of playing the guitar a bit off.  However, when both actors re-enact piano playing, they are seamless and believable.

I drove to Palo Alto from Oakland and I would do it again to see Sister Rosetta Tharpe come to life.