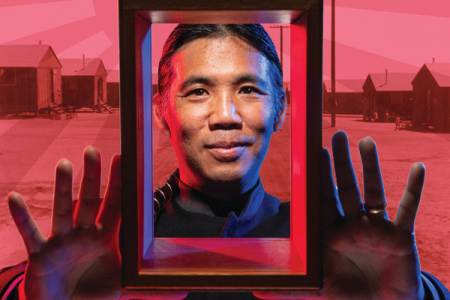 David Hirata, magician and storyteller, engages us immediately with his relaxed style. A cart with a wooden box stands near-by capturing our curiosity as “The Bridge over the River Kwai” plays softly. In “A Box Without A Bottom,” Hirata unfolds his Japanese family’s struggles in America, and reveals his lifelong love of magic.

When his daughter tastes sushi for the first time, she asks him, “Are we Japanese or Regular?” In answer, Hirata produces two pieces of rope, one white for Caucasians, and one red for Japanese. He twists them into candy cane. When the ropes untwist, a red knot magically appears on the white rope. Miraculously, Hirata removes the knot as if removing himself from the white culture. We are awed by the trick and the symbolism, too.

Hirata takes us back to his post-WW II, “non-Regular” Japanese American childhood in Baltimore.  As a kid, he haunts a magic mart, where the friendly magician owner shows him a two hundred-year-old box, “Soko-nashi-Bako,” a box without a bottom. Enthralled, he buys the box from his new friend, who met Houdini, and who teaches him Eastern magic.

He explains the box is called “The Jap Box,” as he removes the lid, showing us its emptiness. It arrived in the U.S. in 1866, brought by the first Japanese man in America, the famous Namigoro Sumidago.  Suddenly, red and white silks materialize out of the void, adding more colorful threads to his stories.

Hirata invites us into his Jap Box Moments—when clueless Caucasians try to be helpful, but are really hurtful. When his friend suggests he could invite the only Japanese girl at their high school to the Prom—that’s a “Jap Box Moment”!

In one captivating illusion, Hirata materializes an egg from a flower petal. Then he breaks the egg, mixing the yellow with the white, representing his conflicts with Jap Box Moments.

He recounts his grandparents’ imprisonment in a Japanese American internment camp. Boxed in their primitive barracks, the men peer out a small window at their wives and children. Hirata reaches into the bottomless box and slowly withdraws white silk hankies, and waves them as he explains the wives and children did behind a distant wire fence.

We feel his struggle to discover his own authenticity to break with stereotypes and be free, like the red knot on the white rope. But as his culture demands, he keeps his pain silent.

Hirata finds liberation through meditation and magic. He quits his scientific doctoral degree, breaking through cultural expectations, both white and red. He intricately cuts tissue paper, and butterflies fly free before us.

Although Hirata doesn’t always nail his impressions, his personal journey, illuminated by magic, touches us. David Hirata unifies his identity with illusion, a truly American invention.

“A Box Without A Bottom” –written & performed by David Hirata, directed by Mark Kenward, at The Marsh, Berkeley, through Sunday, January 26, 2020. Info: themarsh.org