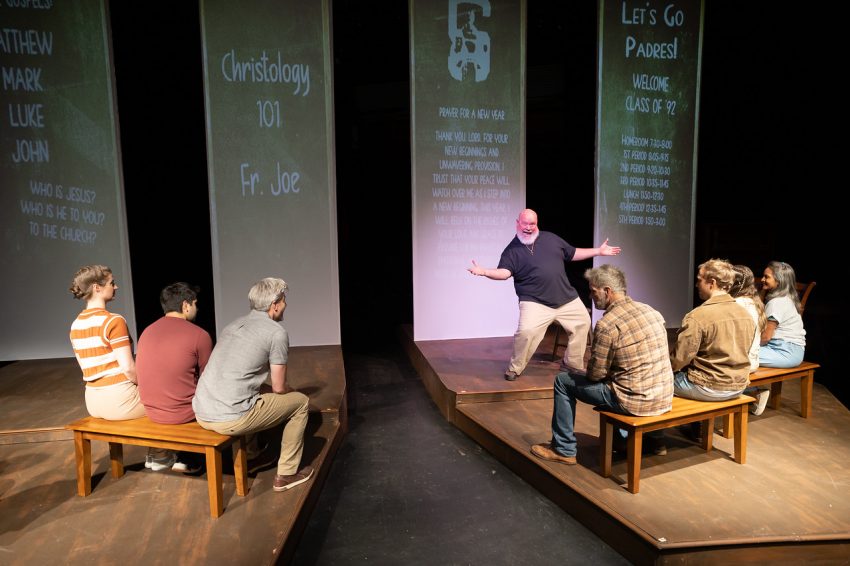 “The Four Gifts,” at Hillbarn Theatre in Foster City, shows what happens when a person who is not a playwright decides to write a play about himself.

Heartfelt and fast paced, yes.  But theatrical?  No.

Father Joe Bradley and his co-author Antonia Ehlers have been working for three years to adapt his book to this play. Father Joe was Chaplain at Serra High School in San Mateo, working with the football players and at nearby St. Gregory’s Catholic Church.

It’s certainly a good plot for a play because Father Joe battled addiction to drugs and alcohol for many years. But turned his life around only to have a near-fatal heart attack.

Why does every member of the 10-person cast have to play the Joe character—some for only a few lines? Bad choice, especially when played by the four women of the cast—including Jeanne Barrett who plays his mother and Emily Burke who plays his sister!

As currently offered, actors change characters so swiftly that we are left dumbfounded.

Bruce Alvin is fine playing Joe at Serra High School in 1992.  While teaching a class on “Christology,” a student gives a poor answer to a question; so, Father Bradley yells out, “Bullshit!”  That gets the play off to a good start.

But it goes downhill shortly thereafter.

Cody Wittlinger as young Joe starts out well, as a high school student who tells his parents that he wants to be a priest.  Although his parents recognize his devotion to the Catholic Church, they suggest that he work at a job out in the “real world,” first.

Wittlinger goes to work for an airline, joining his fellow workers in stealing little bottles of liquor and cigarettes. Then he joins them for beer—before moving on to opioids and other drugs.

Marty Lee Jones is fine as a doctor and, later, as one of the Joe’s in mid-life, but he frequently speaks too softly to be heard. Johnny Villar also does well as both Father Bob and another Joe. But his hair color doesn’t fit the other Joes.

Some of the setting is arresting, especially the projections of large, stained-glass windows, clouds, and other designs by Patrick W. Lord.  We can even see through the translucent panels to other scenes—a lovely effect. In the hospital scenes, we can see a body with doctor and nurses, hovering—silhouettes that are intriguing, but sometimes rushed.

Randy Allen does a good job as the last Joe, who ends up getting a heart transplant, later feeling his body is rejecting it. As gray-haired Joe, he discovers his body is strong enough to continue being a priest—and writes a book about his amazing life.

Sadly, the whole production doesn’t jell.  Far too many short scenes, far too many actors switching from one character to another.

It’s possible Father Joe’s book, The Four Gifts, doesn’t translate easily into a play.  Clearly his life story is fascinating, but it takes an actual playwright to write it!