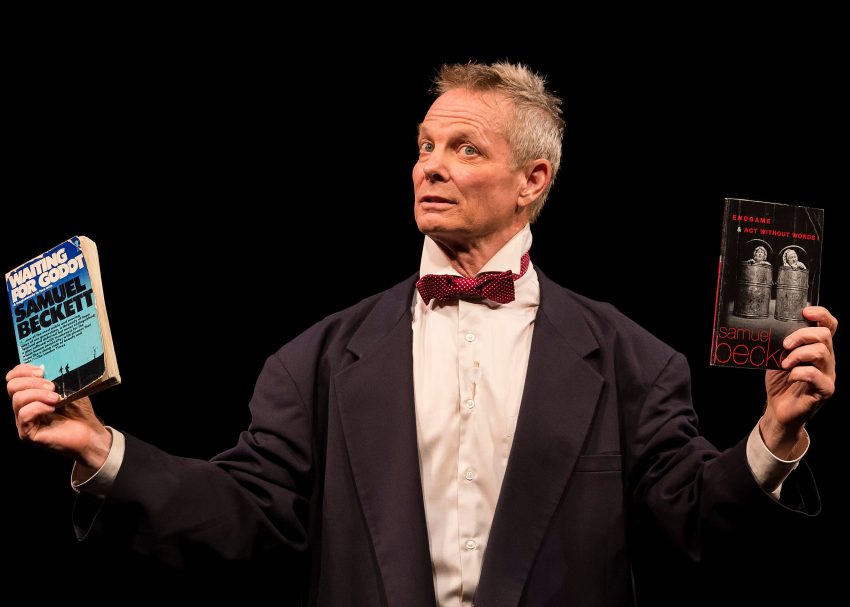 Dynamic actor and writer Bill Irwin warmly greets us on a near empty stage, with only a lectern,  a bench, under a soft spotlight. Irwin presents us with a question: Can Samuel Beckett’s unique work be incorporated in the performance art of a professional clown? Irwin asks, “Is Samuel Beckett writing in clown territory?”

The consummate actor talks about the world of Beckett’s “Waiting for Godot,” humorously contrasting the European pronunciation of Godot—”Go-da”—with the American “Ga-doe.” He shares interesting tidbits about Beckett: his conflicted Irish heritage, his writing first in French, then translating into English. The man is full of quirks that pique our interest.

Irwin plays with words and themes from two Beckett works: his early stream of consciousness essays called “Texts for Nothing,” and the world-famous absurdist play “Waiting for Godot.” Irwin explains, “He was the voice inside my own head … the way consciousness operates.” Happily, I share his excitement on first discovering Beckett.

For the rest of show, he blends baggy-pants clown art with his easy-to-understand physical embodiment of Beckett’s psychological turmoil. With breathtaking genius, Irwin builds enchanting wonder about Beckett and his works, keeping us intrigued all the time.

Holding his arms close to his chest, Irwin intones from “Text for Nothing #1”: “I’m in my arms, I’m holding myself in my arms.” He takes us on an excursion into Beckett’s mind through physical movement. He demonstrates Beckett’s inclination to examine being inside and outside of himself, simultaneously—a rare comedic feat.

Beckett and Irwin unite in his riffs from “Waiting for Godot,” using old-fashioned vaudeville routines, sometimes with slap-stick humor. Irwin reminds us that four characters in “Godot” wear bowler hats; then imagines actors and directors toying with changing the hats. Recalling the hat fumbling in “Godot, he says, “Imagine them wearing baseball caps,” as he charms us with a brilliant hat-juggling show.

Irwin wears clown-like, baggy “Beckett pants” with suspenders to pull off a zany enactment of  enslaved Lucky’s nonsense monologue from “Godot.” The monologue depicts the fruitlessness of thinking for the powerless. Irwin resolves his own question: Yes, Samuel Beckett has successfully entered “clown territory.”

With the help of Michael Gottlieb’s clever lighting and Martha Hally’s classic costumes, Irwin’s characters, both comedic and melancholy, explode with meaning.

Irwin refashions Beckett’s absorbing existential questions for us: Will I survive the next wave of COVID? Can we “wait” in the hope that tomorrow will bring a critical solution?

Irwin’s combination of clowning and contemplation is unique and timely—one comic genius reveals the depths of another comic genius. Go see this once in a lifetime event.