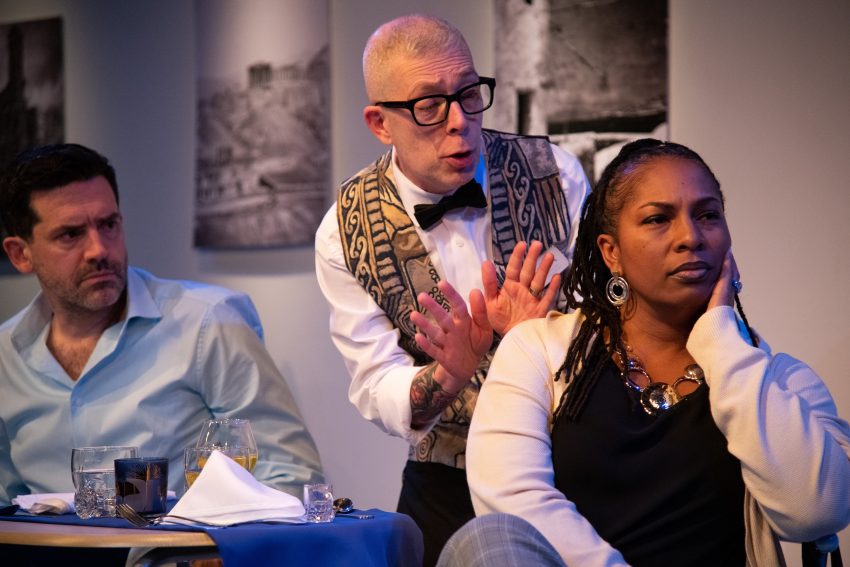 You know what it’s like, right? You’re on vacation, waiting in a restaurant for waitstaff to serve you.  It seems like forever before your water arrives and you can order a drink. The menus sit in front of you closed because you have already decided what you want. Where is the waiter … the bread … my drink? You are starving and the family is restless.

Welcome to Dmitri’s Greek restaurant on stage at Altarena Playhouse. The table for two is set and two other empty tables sit out front. A lovely stone patio floor brightens the upscale restaurant. Behind the two diners, we can see through a big window to watch the excited waiter’s actions in the kitchen—a clever addition to the elegant scenic design.

Peter (Peter Marietta), a marketing manager, and Irene (Kimberly Ridgeway), a psychotherapist, have spent all day flying in from New York. They are celebrating their 25th anniversary with a luxury trip to alluring Palm Springs. It’s close to midnight and everything has gone wrong. Even their expensive hotel room’s jacuzzi has broken down. They hustle into the only restaurant that’s open.

The waiter’s exaggerated gestures mirror his dramatic frustration. As the waiter, Clark does a magnificent job of manipulating our feelings. We love him and we hate him. At times, we even see our angry selves reflected in him. He captures Irene and Peter to the point that Peter asserts, “This is not service, it is a hostage situation.”

Marietta and Ridgeway are magnificent as a couple who are discovering glitches in their marriage and airing them, in Wendy MacLeod’s brilliant comic dialogue. They bicker over intimate family and relationship issues that are common to every couple.  Ridgeway’s expressions—sometimes subtle, sometimes exaggerated—are priceless.

Director Katina Psihos Letheule excels in enriching each character. Ridgeway and Marietta dance beautifully with MacLeod’s realistic conversations, even as they speak at the same time, making each word and feeling clear. Their synergy deepens our involvement in their family squabbles—while the infuriating waiter refuses to deliver their food.

As the unbalanced waiter, Clark helps us see the balance in Irene and Peter’s marriage —their appreciation for each other, as well as their differences.

And a clever, unexpected plot twist awaits us at the end.

“Slow Food” is a heartwarming and refreshing comedy in a welcoming, cozy space. The well-written, superbly-acted, and precisely-directed production engages each of us. Whether we identify with cautious Peter, clever Irene, or crazy Stephen, we are drawn in and intrigued by these comic versions of ourselves.

Come and make a reservation at Altarena’s Greek restaurant. It’s a treat.