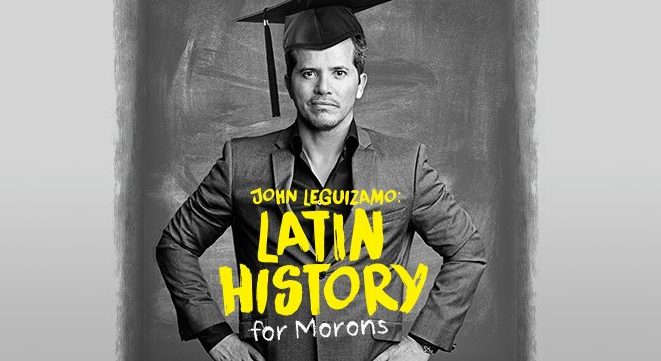 When you are in the presence of John Leguizamo, there is fire in the air. Sparks radiate from the stage to every member of the audience and we become part of his great design. Leguizamo has been making magic for a long time now, with his five one-man shows, since 1991, about growing up Latino in New York City.

His previous shows: “Mambo Mouth,” “Spic-O-Rama,” “Freak,” “Sexaholix…a Love Story,” and “Ghetto Klown” all sparkle with self-reflective humor about growing up Latino. “Ghetto Klown” is now available as a graphic novel; and you can buy his books at Berkeley Rep, after the show.

He has won lots of awards, made many movies, and won the hearts of audiences at his shows, as well.  His calling card is honesty, earthiness, and a sense of what makes him both different from and the same as the rest of us. Leguizamo shines with NYC street lingo. He brings the tough streets of New York where he grew up, a mischievous boy from Colombia, to Berkeley Rep. He blurts out the things that we only think or faintly sense. He is blazing trails, swinging his verbal machete, cutting through the jungles of our politeness and evasion.

No one is safe when Leguizamo hits his stride. Some may object to his stereotypes of Anglos, psychotherapists, Jews, Gays, and others—and that’s his point—he wants to get us off our high horses and down with the people of Queens, the Bronx, and Alphabet City. Leguizamo defies this age of gentrification, reminding all of us of our predilections, our brothers, our sisters, our mingled roots. Can we handle it? Leguizamo is the anti-Trump, anti-narcissist, rolling on the stage, dancing like a gay Montezuma to prove it! He is the Apostle of Understanding, transcending mere racial types, making fun with the race of humans. In these perilous times, only a bold path will do. John Leguizamo brings us a whiff of his Colombian roots  to illuminate the road we are all travelling together, now. He lets us know that we don’t know much about the origins of the Latin-American cultures.  Attired in a professorial tweed jacket and snug vest, he hops around the stage explaining how the Latin-American peoples first arose from the original inter-mixing of the invading Spanish and Portuguese conquistadors in the Americas, with their priests, navigators, and armies.  In the initial phases, without accompanying women, he tells us, guys like Cortez, Pizarro, Balboa, and their troops preyed upon, enslaved, tortured, and raped the original denizens of South America, giving rise to the Latin-American peoples. In the North, Columbus and other “explorers” used their own brand of brutality, too, from the start.

We are engaged by Leguizamo’s need to tell this story because most of us–Latinos, Latinas, and others–don’t really know much about the unthinkable Holocaust visited upon 26 million Native Americans. These many tribes of human beings were exterminated on the road to “westernizing” the Americas, reducing 26 million indigenous peoples to 1.3 million, in South, Central, and North America!

However, John the Teacher cannot stick to his wobbly “Timeline,” after he confronts us with the terrible facts. He is weaving an irresistible and intricate pattern, running around and behind the blackboard. He explains the lack of Latin heroes from the Mayans to “The Age of Pitbull.” He is the best and most manic teacher you could imagine, confronting and disputing the “Lies Our Teachers Told Us,” at last. He is updating Howard Zinn and James W. Loewen, alternative historians whom he consults for evidence of Latin victories, rather than victimization.

John recounts having to bone up on his own peoples’ history in order to help his son in Middle School in New York to find a “hero” to write up. The father-son tension, not to mention father-mother and daughter tensions rise to fever pitch, when their roles get re-shuffled and responsibilities get re-assigned. As John dances in the roles of the Aztec king Montezuma or pulls out a helmet to play a conquistador or marches with Indians on the Trail of Tears, we begin to understand the journey he is taking us on, using the “New History.”

He does a quick “drag” as Cuban woman, Loreta Janeta Velázquez who joined up with the Confederacy in the Civil War by dressing up as a man. He reveals the true origins of tomatoes, potatoes, and chocolate, and riffs on their uses. John is an equal-opportunity, anti-PC offender—and he manages to make jokes about every group you can think of—boldly attacking with humor, dances, and music.

The house is always with him, as he re-educates us on origins, originators, and originality—while trying to help his son to find a Latin hero in the grim history of the vanquishing of the Latin American peoples.

Leguizamo dances, prances, chants, rolls, and rocks–he brings America home to itself, no matter what the race–because he is outpacing us to label all peoples as part of the race called human. He offends many to point up our self-referential squeamishness. He plays a Shakespearean Fool or Clown who cannot help but point out our faults to our face. Like Lear’s Fool, the court jester plays around the edges of the Emperor’s sensitivities. He titillates, he excites, he conquers.

When the issue is imperialism, colonialism, and egotism, there’s not much room for escape. We are indeed the morons who need re-education.  And we will sit still for more–so long as the Jester is as persuasive and charming as the brilliant John Leguizamo.