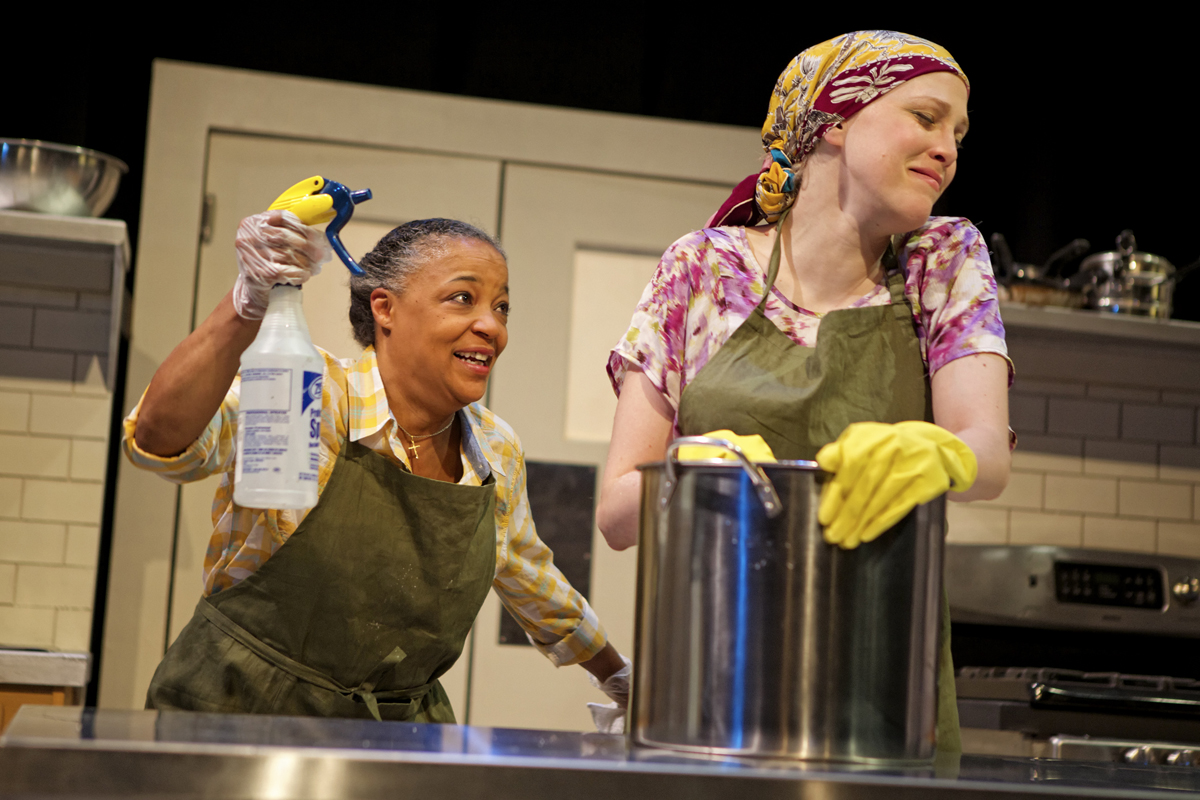 In “Grand Concourse,” at Shotgun Players, each of the four characters undergoes both change and conversion, following the precepts of playwright Heidi Schreck’s inspiration, the great Dorothy Day. Day, the great social justice advocate who started free food kitchens in New York in the 30s,  wrote: “The greatest challenge of the day is: how to bring about a revolution of the heart, a revolution which has to start with each one of us?” Schreck takes the challenge and shows us revolution in the lives of four people working in a Bronx soup kitchen.

Warmly and engagingly directed by Joanie McBrien, Shotgun Players’ excellent actors give us precise, detailed realizations of Schreck’s themes. Each believable character in the kitchen presents a challenge to the basketball playing, non-habit wearing nun, Shelley (an inspiring Cathleen Riddley), who needs to time her prayers at the microwave oven.  Shelley’s charitable work in the Bronx “soup kitchen” tradition brings unpredictable results for her three allies. The second act brings a series of conflicts and surprises—all perfectly real and enlightening.

More than a play, this simple drama feels like a window on an underworld, where prayer struggles with privilege, and where public good provokes private understanding. Schreck’s words remain simple, daily conversation; but Shelley’s unclerical reactions and O’Brien’s tight pacing keep our attention on each turn of the screw, each sacramental arrival and departure.

The characters move toward unexpected fates, becoming a liberating experience for the audience, when all the pieces have fallen into their unpredictable places. Forgiveness and withholding forgiveness both become virtuous paths to understanding in this detailed examination of four souls who choose to interact and therefore, undergo change.

When “Grand Concourse” opens, we see Shelley (Riddley), a nun without the trappings, in a Bronx soup kitchen,  praying at the altar of the microwave timer: a striking, quiet opening to a thoughtful show.  The set is a detail-perfect working kitchen by the magnificent set designer, Nina Ball. Her kitchen set contains all the action of the show, start to finish, with the long wooden counter table smack in the middle for slicing and intimate encounters. Along the sides, she give us the big refrigerators, the working sink, and the operating stove, complete renderings of kitchen reality.

There are knives for the constant slicing of carrots and mushrooms and eggplant. And beyond those heavy swinging doors in back, there’s the suggestion of the big dining hall with the poor suppliants who come for regular meals. They have nothing and nowhere else to go. Really, it’s a Shakespearean stage with an hidden, inner stage beyond—and it stands for the kitchen you could see in any mass feeding station, womaned by Dorothy Day, or her descendants. It’s the Church of Shelley the Charitable–up to a point.

The set and the scenario are already a metaphor for our world, seen from the bottom up. The only privileged character in the play is the volunteer from Uptown, Emma (a sparkling and engaging Megan Trout). She comes into the kitchen, full of angst, where vegetables are turned into soup for poor people. She wants to work under the direction of the admirable Shelley, who runs a tight kitchen. From the beginning, Emma does not quite fit in; she soon wears a headscarf to cover the ravages of radiation treatment for leukemia. She’s a college student who has “dropped out,” and is having trouble with her mother. She’s a bit of a mystery, and we read her at our peril. Shelley accepts her–provisionally.

The handyman around the nameless shelter is an engaging young Dominican named Oscar, a young gentle giant played sensitively and flawlessly by Caleb Cabrera. He becomes a target for the mysterious volunteer, Emma, who tries to wrap him around her finger, endangering his ties to his off-stage girlfriend, Lydia.

Also on scene is the white haired and furiously bearded Frog (a genial, fragile Kevin Clarke), who pops into the kitchen to score a few carrots and get some good words, some love from the charitable Shelley, and the too helpful Emma, and the alert, careful Oscar.  The foursome form a holy family of sorts—each working out her/his challenges through the others. Each actor develops a character that goes beyond what the script suggests. Shotgun’s repertory season is at the top of its game. Watching Frog, Caleb, and Emma, alongside their mentor Shelley, leads into a subtle game of love, caring, danger, and confession.

In fact, Cabrera’s Oscar keeps the kitchen afloat with his candor and his steadiness, even under temptation. Oscar may even represent a stronger spiritual center than the basketball playing nun, Shelley. Emma turns into a bigger sexual and moral problem than you would expect in the second act. And with some help from Emma, the nervous jokester Frog makes surprising leaps from his 60s past to the present.

Riddley’s Shelley rises to heights of forgiving and self-realization. Shelley’s initial rigidity gives way, when Emma turns out to be something other than she presents.

You can go and see these masterful actors in a timely piece, that starts with starvation and poverty, and through the spirituality and influence of a Dorothy Day soup kitchen, leads us to question how much we can give. And what we need to take. Come to the Bronx’s “Grand Concourse” to partake of the experience, first hand. These four people matter.

The Shotgun plays include “Who’s Afraid of Virginia Woolf?” by Edward Albee, “Grand Concourse” by Heidi Schreck, “Caught” by Christopher Chen, “The Village Bike” by Penelope Skinner, and “Hamlet” by William Shakespeare, in repertory through January 22, 2017.