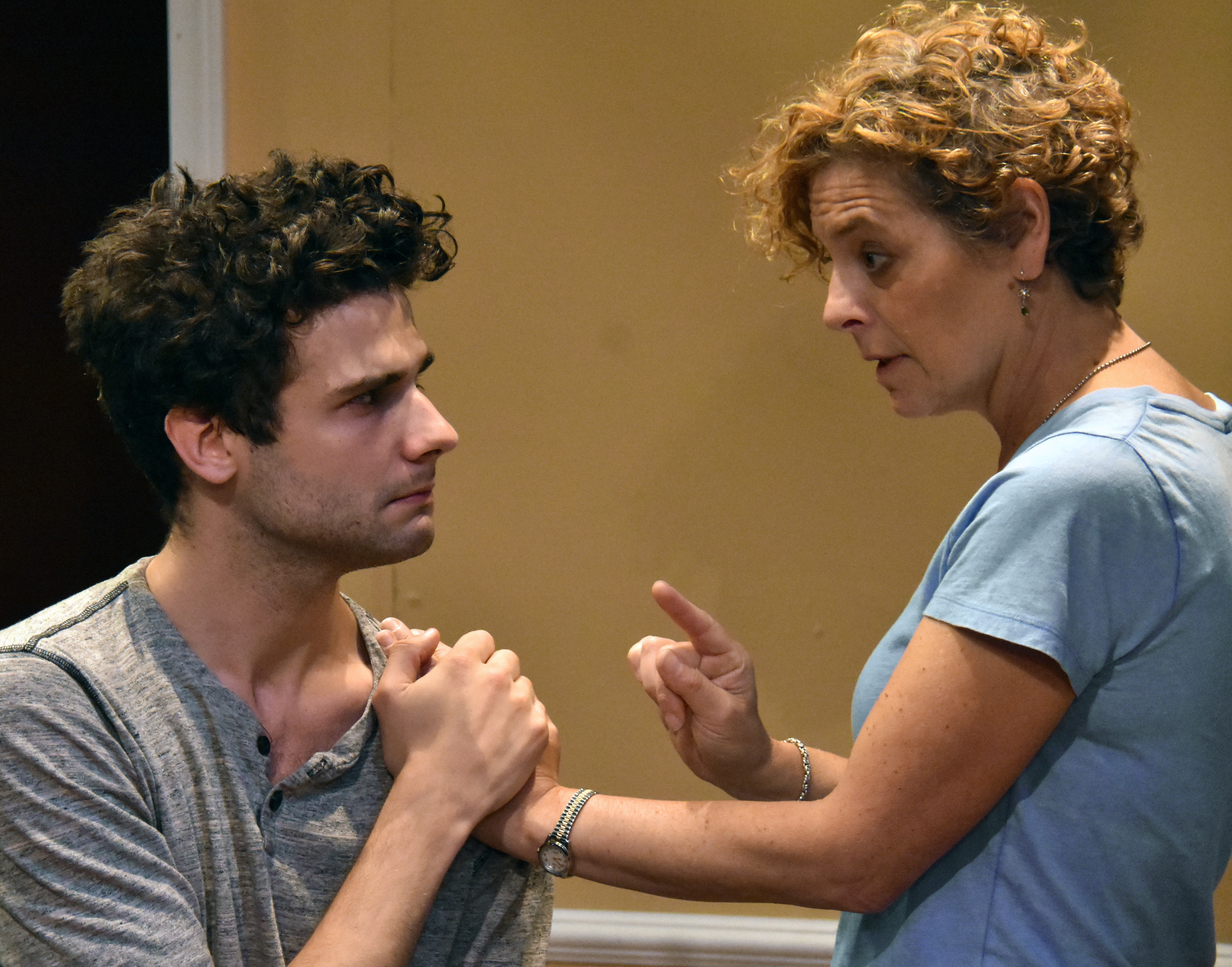 ‘The Fire Next Time’ in New Thriller

“The Thrush and the Woodpecker” at Custom Made Theater features three gripping performances by three superb actors. For that reason alone, you ought to see it. Brenda Hendriks (the crystalline, elegant Stacy Ross) is a tightly wound and moody mother, who rules her grown son with an iron hand. The son Noah (a comic, tortured Adam Magill) reacts to her jabs like a trapped animal. They play like cobra and mongoose, with intense and hypnotic focus. Into their isolated nest comes Roison Danner (the striking, sly Fontana Butterfield), who adds an exotic elixir to their suburban dance of death. The visitor seems to be Brenda’s old friend, but gradually brings Brenda’s hidden identity as Connie into a terrifying present.

Director Tracy Ward has choreographed their struggles in a familiar but isolated house on the edge of a wind-farm in Northern California. Ward uses startling flashes of humor to accent the hidden depths of their involvement. The actors travel swiftly over the small stage, so that we feel like a part of their intimate conflicts. She has used startling sound by Liz Ryder and mysterious animal animation by David Goodwin, winningly projected by Maxx Kurzunski, to weave an spell for the National New Play Network’s Rolling World Premiere of Steve Yockey’s play. You cannot take your eyes off that stage for the 75 minutes that the play flames up and whizzes by.

There’s a knocking at the door—but who’s knocking? That’s the frequent frightening message from “The Thrush and the Woodpecker: A Revenge Play.” There are gatherings of woodpeckers on the grass in front of the isolated house. Something is amiss with Brenda’s past and with Nature, in general. We have violated some essential laws and a Descent of Woodpeckers are gathering on the lawn, on the roof. The Hitchcockean “Birds” are coming.

Noah Henriks has turned up at home because he was kicked out of his elite undergrad college in the East—for vandalism! He was protesting against light pollution, another violation of Nature,  and attacked some street lights on campus. Now he has to spar with his super-smart, super-controlling Mom, Brenda, whose nurturing is more like threatening. Maybe some hint here of Hendrik Ibsen—it certainly seems to be a family centered on social justice issues. They debate avidly and clinically—a joy to watch—with the two actors at the top of their game, both comic and tragic, exchanging jabs and jokes.

But there are hints of further dis-ease. Brenda’s second husband has fled the coop for Alaska, “temporarily.” And Noah walks a fine line between them, trying to help his Mom, who won’t stand still for help. Noah has to stand against a sea of troubles all round him. He would rather be an astronomer, but righteousness has isolated him from his kind.

Once Brenda haughtily leaves for a drive to town, the third arrives—a former friend of Brenda’s, Roisin Danner (Butterfield)–unexpected, charming, lovely, polite to a fault. And she hangs out with Noah, waiting for his mother’s return. Noah smiles and serves tea, while Roisin plans and secretly schemes. From there on, the birds start attacking in earnest, the rafters groan with the attacks of woodpeckers, and the stage is set for a vengeful and physical showdown between the two women. Danner keeps our interest with her story of an orphaned woodpecker, told with splendid, subtle story-animation. Like the woodpecker, Noah is kicked out of the nest.

Every moment is engaging, the sudden animation in the windows is gripping, the stories of old times are horrifying, and we descend into a shocking pit of lies, deceptions, and family-fouling furies. Who is taking revenge, and for what? How are we involved in this plot? This superb production survives and lives on to help us understand how the way we live is having its consequences in the present, admit it or not. This play will enlarge its scope it its next stages of development. Yockey is asking whether our meager and exploiting way of life deserves to live or die. Ward and crew weave a thriller so that we must participate in Noah’s plight, orphaned woodpeckers all. You’d better see this one because, as the Bible says, it’s “the Fire Next Time.”

Can Noah tame and save this sinking ship?  Is this play a story of ghosts that need busting? Is it a biblical ghost story about a young man who is besieged by our inhumanity to living things?

This ornithological thriller, a revenge tale, brings all three brilliant actors to the edges of sanity, and makes us ask what secrets out there might unhinge us? Besieged by sin and cruelty, who can survive in Noah’s slender cage?

“The Thrush and the Woodpecker” by STEVE YOCKEY, extended through August 27, 2016. Custom Made Theatre, San Francisco. For info: custommade.org/thrush/