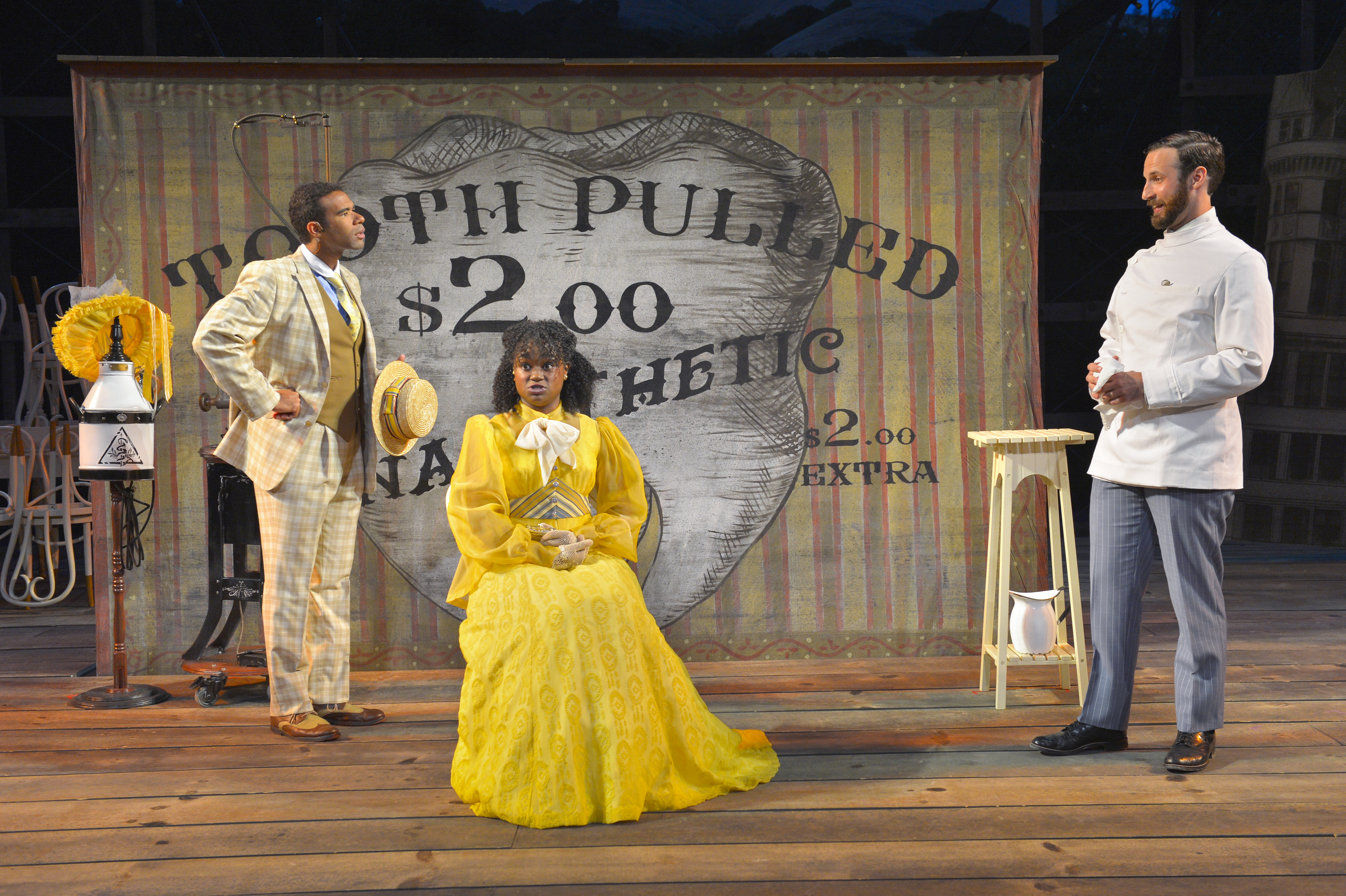 Director Lisa Peterson has unfurled an early, hilarious Shaw comedy that forecasts the 20th Century and beyond. “You Never Can Tell” (1896) already displays the racial, colonial, gender, and feminist questions that inspire and confound us still. To put all that into such an early play that prefigures Shaw’s later work and his Nobel Prize in 1925 leaves us breathless.

Seeing “You Never Can Tell,” outdoors and set in California, seems a strange fit—yet it works, brilliantly. Peterson has livened up Shaw with bouncy American manners and bright sea-side costumes. She has transferred the scene to an oceanfront resort that may well be San Francisco in 1900, with lights that outline a roller-coaster and a rainbow colored ferris wheel sketched out on the boardwalk stage.

She and her children have been hiding out from their abusive father, whom she fled years before. Her African American family breaks new ground, tears down old barriers, and confronts the stodgy middle-class. They are strivers, in the American way; the kids are raucous and over the top–they challenge the rules.

In the opening scene Dolly, in a fluffy bright yellow dress is having a tooth pulled by Dr. Valentine, the bearded, rakish, but inexperienced dentist. You might think them a romantic pair—but that’s just the beginning of Shaw’s misdirection. Dolly prefers pain over an extra $2.00 for anaesthetic. She tells him, “It’s your business to hurt people.”

Peterson has cast the bumptious Clandon family as African Americans, highlighting their suppression and their rebellion. , Mrs. Clandon, the intellectual and inspiring mother, dominates the scene as she wrangles her two wild and winning twins, Dolly and Philip, trying in vain to tame them. The exuberant, naïve twins are all over the set, dressed in bright colors, expressing their independence. They sing, they dance, they do cartwheels—they embody popular culture. Dolly asks questions, confronts strangers, talks impetuously; while Lance takes strong stands, asserts himself, and shows irrepressible gaiety. You gotta love ‘em, as they horrify the stodgy Americans.

Mrs. Clandon stands for women’s rights and has raised her oldest daughter Gloria (Sabina Zuniga Varela) to reject the romantic advances of Valentine, her failing dentist lover. Gloria prefers to become the New Woman, and refuses to be subservient to a man. Mrs. Clandon’s Feminist Manfesto has taught Gloria to strenuously avoid

“a life in which husbands open their wives’ letters and call on them to account for every farthing of their expenditure and every moment of their time; in which women do the same to their children; in which no room is private and no hour sacred; in which duty, obedience, affection, home, morality and religion are detestable tyrannies, and life is a vulgar round of punishments and lies, jealousy, suspicion.”

George Bernard Shaw presents his platform for women’s rights, when women had few—and also brings in children’s rights, civil rights, and a dash of anti-colonialism. Since they were raised in Caracas, are they trying to escape Imperialism as well as Patriarchy?

Of course the long-lost father turns up in California as a powerful landlord, still overbearing and authoritarian: Fergus Crampton (a powerful Michael Torres) is a thoroughly Trumpean oligarch, a land baron, and violent father.

The jokes and levity hardly ever fail—and if you don’t like one, there’s a better one coming up. How perfect for an American perspective—things will progress, there’s brightness just ahead! For Shaw, the Age of Bernie will dawn, after all.

Walter the Headwaiter (the ebullient Danny Scheie), represents Shaw’s hardworking New Man. Walter manages to stitch together these competing men and women, parents and children, workers and lovers, into a functioning comedic world. He takes the edge off their argumentative and dispiriting outdoor dinner at the Marine Hotel and thrills us by the way he archly pronounces “Chardonnay for the laaady.” Shaw’s anti-authoritarian, socialist waiter Walter, whose surname is Boon, does ‘boons’ or favors for all concerned with a decided generosity, good-heartedness, and sprightly wisdom. At crucial moments, he proffers coffee, tea, or scotch, and mutters, “You never can tell.” Even his exits are balletic and exciting—a performance not to be missed. Walter the Waiter, the New Man, wiser than those he serves, triumphs over the snooty folks who give him orders.

Aside from Shakespeare, only Shaw can pack so much fun into one wild evening. Better get over to see how he does it.  Shaw lived nearly 100 years, and his sharp commentary lives with us still. It’s a joyous and enlightening Shavian comedy–about love, equality, and empathy.