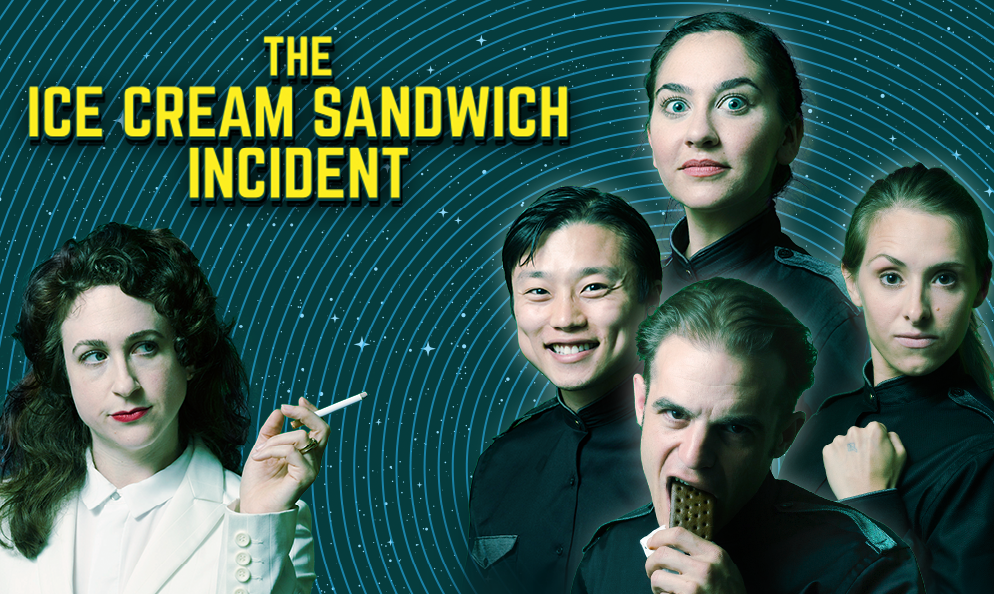 As a recent transplant from L.A., entering my junior year at CAL, on Saturday I ventured into “The City,” the urban playground of San Francisco, to see Barry Eitel’s “The Ice Cream Sandwich Incident,” by Faultline Theater at PianoFight. Barry Eitel’s quirky and perverse treat, set in a mock space capsule with four ill-assorted crew members, presents a tasty mash-up of reality-TV parody, sci-fi goofiness, raw dog insults, and comical sexuality. Eitel’s humor has bite and shock value, as giggles ripple through the crowd all through the dialogue. Faultline provides lighthearted profanity, sexual innuendo, and gossipy insults that will make you think, “Did they really just say that?”

Eitel has kicked off a debate on  current issues: corporate fundamentalism, sexual repression, monopolization of attention via technology. Unfortunately, the play’s anti-corporate agenda gets diluted by a whimsical and sketchy plot, yet to be filled out with detail.

Eitel’s experiment sets up a dynamic, reality TV ambiance for his four aspiring astronauts. They must live together, following the strict rules imposed by corporate masters. They are expected to follow “chore charts,” and to have assigned “family dinners,” and of course no sex, because that would disrupt corporate fundamentalism.

The four aspiring astronauts are hired for a yearlong space simulation, isolated in a capsule in the desert to test their ability to get along with each other.The subjects are overseen  by May (Becky Hirschfeld), a snarky corporate “psychologist” in an all white suit. She presents herself as a scientist—but the weirdness of her questions proves she is anything but objective. She is controlling their every move with fake science and pressure from the company running the experiment. Her opening interaction with Amy (Nora Doane), a zealous but naïve “pleaser” reveals her hidden agenda.

The rest of the crew is comprised of the awkward and adolescent  Ripp (Daniel Chung); the ostensibly pragmatic but guilt-ridden geologist Jones (Adrian Deane); and the obnoxious and overbearing Captain Tugg (Paul Rodrigues). To add to the ridiculousness and fun, Amy has invented a self-hugging Machine. And Tugg reminds us of a cubicle rat middle manager, who tries to lord it over his minions, pulling rank, like an even more deranged Steve Carel in “The Office.”

Tugg has has eaten all four of their ice cream sandwiches; an act of hedonism and self-indulgence that has riled up the “crew,” as well as their corporate conscience, May. The tightly controlled “Big Brother”  culture begins  to short circuit. Any semblance of unity falls apart and they are at room-mate war with each other, just like any disaster-ready reality TV show.  Sex in this antiseptic setting is strictly verboten, or so they think.

There are bright and funny spots, but “The Ice Cream Sandwich Incident” does not yet fulfill its potential. Eitel gives a plethora of funny and awkward interactions; but it would be great to see him hone them even more.