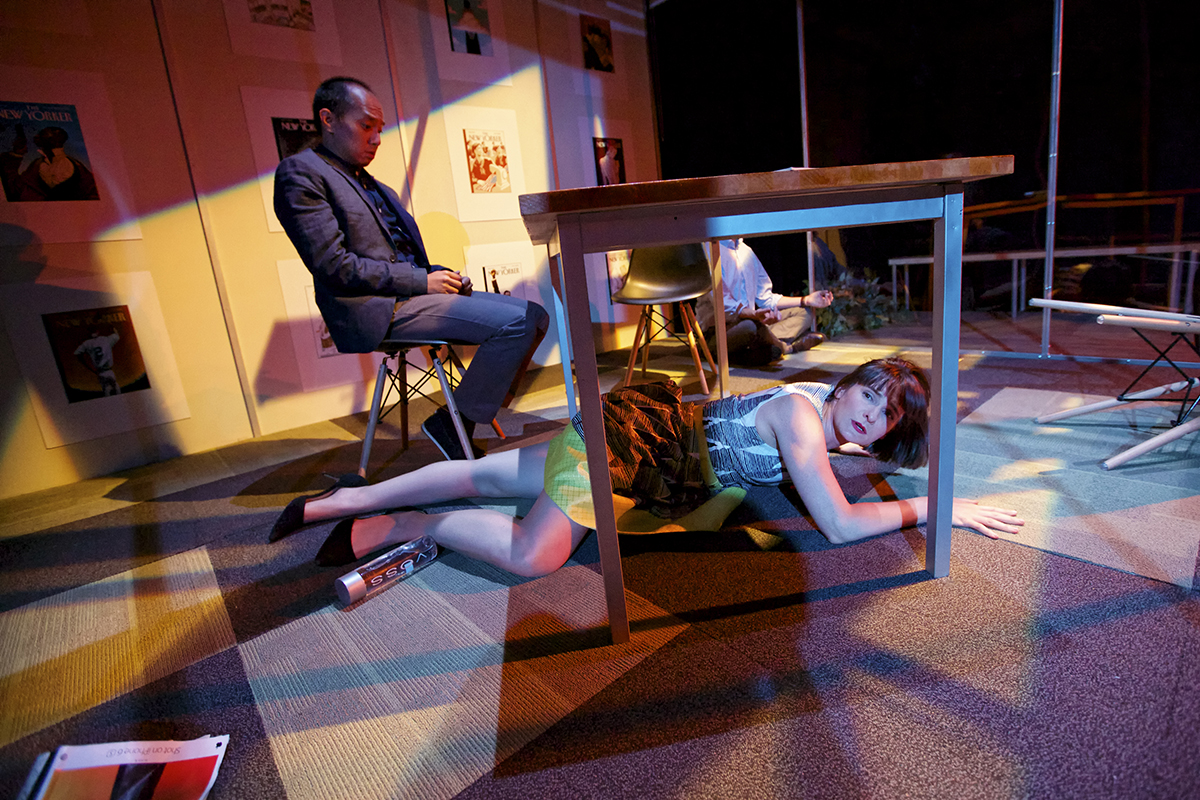 On the way to an art show, you may stumble across great drama. How long is it since an art work or a play caught you, confounded you, contradicted itself, and confessed to not knowing? These are some of the forbidden territories that Christopher Chen’s simply titled play, “Caught,” crosses and crisscrosses on the way to considering truth, identity, and Chinese/American misconceptions. Here’s a play that appeals to an infinite number of audiences, and lends itself to innumerable interpretations because it’s a play about interpretation, itself.

What a joyous experience to be on the edge of your pew at Shotgun Players for the whole length of the performance. At first, the gallery installation of Chinese art censorship versus U.S. censorship follows our expectations—with a heavy bias towards Western expectations about China. The show opens with a touching lecture by the artist Lin Bo (a genial Jomar Tagatac) who tells us the terrible tale of his imprisonment for two years in a degrading Chinese prison. His crime was making an art work, a poster that encouraged virtual protest on the anniversary of the Tienanmen Square uprising of June 4, 1989. We learn fascinating facts about art and life in China, and we empathize with Lin Bo, giving him all our carefully cultivated U.S. sympathies. Director Susannah Martin makes it all feel “real.”

In the second scene, we find Lin Bo in a stunning transparent office at the New Yorker magazine in the Freedom Tower. A reporter and her boss are questioning him about his story, which has appeared in the magazine. The glass box stage set springs from the fertile genius of Set Designer Nina Ball, who has surpassed herself, yet again. Can she be any more design delightful?

The starkness and the beauty of her set fits the ‘friendly’ interrogation of Lin Bo by the reporter Joyce Anderson (a sharp Elissa Stebbins) and her boss Bob Levy (a volatile Mick Mize). The two of them confront him with competing narratives about his imprisonment. They get their “facts” from a Stanford researcher, who claims that the cells in Cell Block #2 are not open to the air, and the soup is not made from cabbage. Well, the Berkeley audience is ready to ridicule the cruel discoveries and doubts predictably offered by a  Stanford professor. Academics always claim to know more than those who were really there, don’t they?  The whole New Yorker scene ends in explosions of doubt.

From transparency to opaqueness in art, the next scene offers the actor Anderson/ Stebbins a chance to interview the artist and creator behind the scenes, one Wang Min (a feisty El Beh). With a mysterious and enigmatic accent, Wang Min, the artist, engages Anderson, the reporter, in a series of philosophical, aesthetic, and existential debates. The artist asserts that categories of “truth” exist in competing genres: art, theater, news, documentary, radio. They argue the well-known case of Mike Daisey, the theatrical monologist who was exposed for “lying” to Ira Glass on NPR’s “This American Life.” In Daisey’s brilliant show, “The Agony and the Ecstasy of Steve Jobs,” he claimed to have seen the terrible working conditions at an iPhone factory in China. The whole issue of what is truth, identity, or art begins to blossom like a thousand flowers on a wandering vine, out of the control of its maker. Even Oprah’s tussle with truth and fiction makes an appearance.

By the time we get to the fourth scene, featuring two lovers and what they believe, we have traveled far from daily truth into realms of personal and political speculation. Christopher Chen’s constant questioning of the realities behind art, news, belief, and cultural constructs have launched us beyond space—one too ambiguous to describe. You have to experience the art/piece to name what he has accomplished here—playing now in New York, Berkeley, Seattle, all over.

Who are the actors and who are the truth-tellers? It’s a fascinating puzzle that you will want to see and analyze for yourself.  The fine acting, the extraordinary design, and their integration into the Ashby Stage space denote a high level of professional achievement. All the arts are at Shotgun Players: they await your verdict.

Shotgun Players is now performing “Caught” in addition to four other excellent productions, in rotation. Their five shows are available on a unique weekly basis. For the dates, see: repcalendar

The Shotgun plays include: “Who’s Afraid of Virginia Wolf?” by Edward Albee, “Grand Concourse” by Heidi Schreck, “The Village Bike” by Penelope Skinner, and “Hamlet” by William Shakespeare–ALL running from November 25 to January 22, 2017.