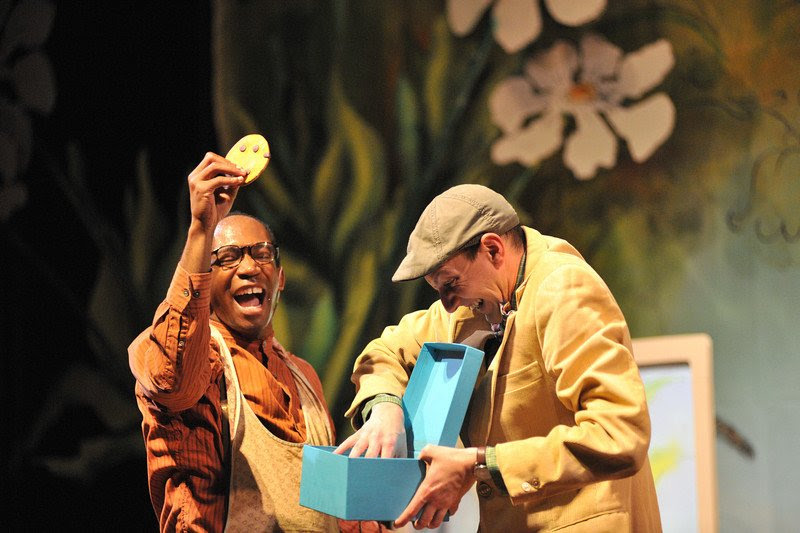 In her 2012 book Bringing Up Bebe (Penguin), Pamela Druckerman talks about the amorality of French children’s books. Things aren’t resolved, she tells us: when strands of conflict unravel they rarely end tied in an instructive little bow. In America, however, we expect our children’s stories not only to entertain but to improve our children, too. We want stories to teach our kids how to count, how to manage their money, or how to stand up to bullies. “Frog and Toad,” by Bay Area Children’s Theatre, running weekends until September 25, at Berkeley Repertory Theatre, sidesteps heavy-handed morality to portray instead that most ethically challenging of life’s endeavors: a real human relationship.

The story is told through short and lively episodes in the shared lives of Frog and Toad, who live next door to each other in matching Disney-esque houses. They are two old friends whose love for one another is deeply devoted and ostensibly platonic. Their complementary personalities provide good fodder for stories of misunderstanding: Will Snail ever deliver Toad his letter? Tales of disagreement: Is risk-taking Frog responsible for risk-averse Toad’s sledding misadventure? And incidents of thwarted desire: Will they ever discover who wrecked their leaf piles? The piece is a Tony-nominated musical recommended for children ages three and up. I brought my five year-old son, Tiyo, to attend his first-ever play.

Tiyo laughed out loud when Toad broke his morning alarm with a shoe, and he watched the oversized chocolate chip cookie dance with wide eyes. By the time the production was three quarters through, however, he was nudging my arm and quietly whispering that he would like to go home. By the time it was finished, he was waving his feet dangerously close to the upper vertebrae of the dad in the next row.

Looking out at the audience of small children and their grandparents during the final act, I was reminded of a bucket of writhing fishing worms. A production for preschoolers should probably be shorter, if only as a public health measure. But despite their kinetic desires, no child cried, screamed, or otherwise interrupted the 65 minute show; a compliment, as any parent knows, of the highest order.

I enjoyed it, too. Like many children’s musicals, its lyrical word-play is intended for the parents, not the children, and it was both clever and funny. The acting style, with Brett Jones as Frog and Anthony Rollins-Mullens as Toad, fits its audience perfectly. They are emphatic and clear, without being plodding or condescending. Amy Poehler look-alike Chrissy Brooks plays the adorable scrunch-faced mouse as if the role was made for her, and the whole cast can sing and dance.

The world of Frog and Toad has no authority figures. This means that unlike, for example, every episode of “Full House” ever made, the show does not include a Major Misstep from which an authority figure expounds on right or wrong. When things go awry we’re left to evaluate the characters’ decisions for ourselves. Such ambiguity makes not only for a better story, but also an unusual chance for our kids to exercise their own muscles of moral reasoning.

In one scene, Toad feels insecure about his appearance in a bathing suit and jumps into the water while Frog tries unsuccessfully to shield him from the pool-yard taunts of their friends. I worried that the taunting, delivered in a catchy, big band refrain of “Toad looks funny in a bathing suit!” would be upsetting for my son, who recently started kindergarten at a new school. And I felt a nagging discomfort when I realized that the scene was never to be fully resolved: Toad, too tired to keep swimming, climbs out of the pool, accepts that he looks funny in a bathing suit, and joins his friends in dancing and singing the song.

I waited for the moment when Frog would chastise the friends for their cruelty, or when some ex-machina event would befall the bullies. But it never came. The message to children, if any, is simply “if you can’t beat ’em, join ’em.” Adults know that this is an effective method of deflecting bullying. But we are loathe to admit it to our children; it’s not exactly party to the social justice values espoused by Danny Tanner or the Berkeley School Board.

For a moment, I wanted Frog and Toad’s fantasy world to correspond to my fantasy of childhood, in which my own children neither bully nor are bullied, are free to be themselves, and are supported in the peaceful resolution of interpersonal conflicts while carefully consuming a healthy snack of local organic fruit at a table made of reclaimed wood. Despite, or perhaps because of the fact that they are dancing amphibians, Frog and Toad portray the messy, exuberant reality of human dynamics instead. Sometimes the people who love us say unkind things. Sometimes they’re right. Sometimes we just get out of the pool and dance.

And my son? He loved that scene.

In the days since, the song has become something of an inside joke between us. He sings it with me and he sang it to his little sister. She thinks it’s about putting a toad in your bathing suit but Tiyo and I know that the real story is something much more complicated, and much more interesting. It’s about what happens when the adults aren’t looking, when the knot of our insecurities is worried loose and we are left to imperfectly, independently, tie it back up again. America doesn’t do ambiguity well but Frog and Toad do. Take your kids to see it. They deserve a story that speaks to them. Svea Vikander is a Swedish-Canadian radio producer and parenting coach. She lives in Berkeley with her husband and two children. Follow her on twitter and Instagram.