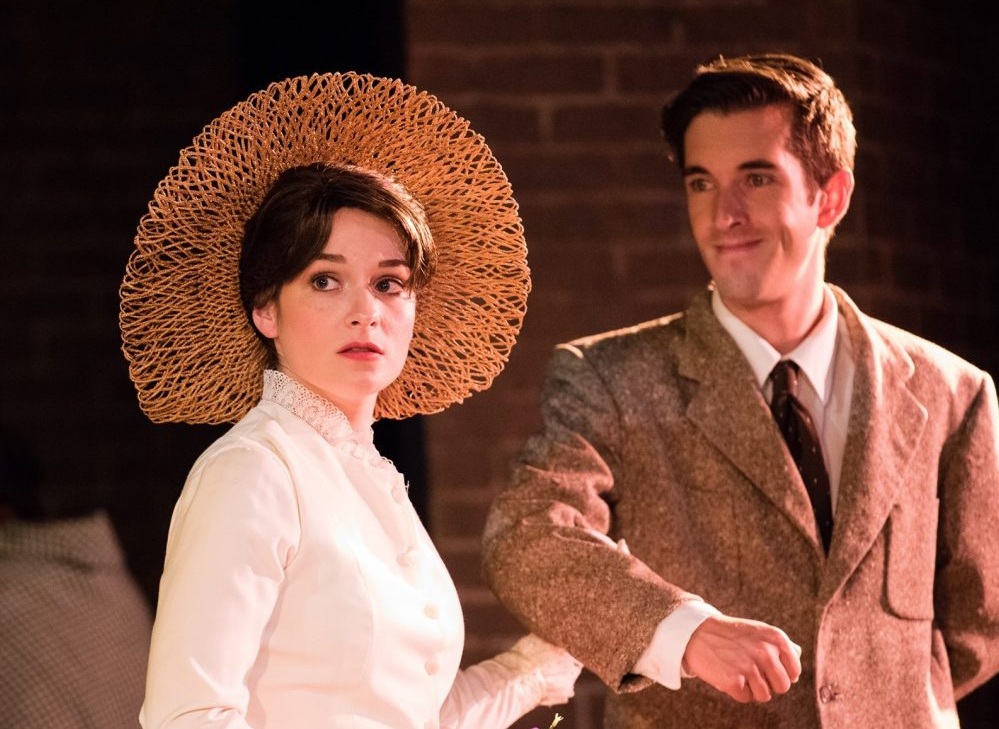 “With a Little Bit of Love,” Eliza Masters the King’s English

How did Lerner and Loewe get U.S. audiences to accept a simple formula about class conflict, taken from the socialist playwright Bernard Shaw? In his play “Pygmalion” (1912), Shaw shows us a Cockney girl, who sells violets on the street, rising up the social class ladder–simply by learning to speak English “properly.”  What lies behind this simple concept, taken from Shaw’s play and transferred to the 1959 world-wide smash musical hit “My Fair Lady”? To answer that question, you have to see CCCT’s fine “My Fair Lady,” celebrating its 60th Anniversary at Contra Costa Community Theater in El Cerrito.

Well, the music, of course, is unforgettable—“Get me to the Church on time,” sung by Alfred P. Doolittle (a lively, witty Peter Budinger) etches itself in your memory. Alfred, a great comic character, is Eliza Doolittle’s irrepressible father, a bouncy, tipsy garbageman (“dustman” in Brit-speak). He is a hit, as a handsome version of the Cockney worker who becomes a “moral philosopher.”  Each character has a marvelous song or two that defines her/his character–Eliza Doolittle (a winsome, winning Becky Davis) sings, “All I want is a room somewhere,” ending with “And wouldn’t it be loverly?” There are so many immortal and lovely hits that we hum everyday.

The unforgettable singing, hit tunes, and clever dancing all take place in a smart reversible set by Designer Kuo-Hao Lo.  Lo has given us a comic and believable poor Cockney section of London to indulge our imagination of poor people who live from hand to mouth. There are tenement stairs and street scenes of surpassing charm, and music provided by two onstage grand pianos, too. With incredible artistry, the designer gives us the Ascot races, an English drawing room, and the Covent Garden Opera House steps. On those famous steps, Prof. Henry Higgins (a sharp and meticulous DC Scarpelli), a Professor of Languages, wields each British syllable like a razor, picking out Eliza for her strange sounds. And take note of the stunning and accurate costumes for slum-dwellers and the elite as well–all quite beautiful, by the deft Lisa Danz.

It’s a joy to hear all these working class and upper class accents, transferred to El Cerrito for a rare delight of story-telling, classical musical tunes, and intelligent political points by Bernard Shaw. CCCT has woven a Cinderella story where Prof. Higgins decides to teach Eliza how to speak “high class” English, so he can pass her off as a princess at the Duchess’s garden party. They sing their English lessons, wonderfully. Together, they sing the hilarious “The rain in Spain falls mainly in the plain,” forcing Eliza to practice her “ai” sounds. It’s one of the great teaching scenes in all of musical history!  And they end with a robust Spanish tango!

It’s an uproarious comedy, so, of course, Alfred P. Doolittle, a great comic creation, has no “morality” at all. He just wants to get by and score the odd Pound Sterling here and there, for a good drink at the local pub. He calls himself “one of the undeserving poor,” which includes most of the world. Doolittle means to go on being “undeserving,” no matter how much the middle class tries to “reform” him.

Eliza sings, “All I want is a room somewhere,” the song of the downtrodden flower girl seller who lives in the slums of London, selling wilted bunches of violets to the wealthy Covent Garden opera-goers.

Eliza’s aspiring boyfriend, the dreamy Freddy (a smooth and stylish Jack Sale) romantically sings the beautiful love ballad “On the Street Where You Live,” that lurks in the heart of every anxious lover. Sale makes an ideal Freddy who hangs out on Eliza’s street just to get a glimpse of her. He epitomizes the romantic middle-class hero, who moons around and loves the flower girl with grace and elegance.

Not quite as openly satirical as Shaw’s impassioned, revolutionary play, the charming musical works its way into your heart and your mind. Director Daren A.C. Carollo and Music Director Greg Zema convince us that basic poverty can be alleviated by language, acceptance, and love–a wonderful 60th Anniversary lesson for our time. Where else would we get a hero who is an eager linguist and a University Professor without a job? DC Scarpelli as Higgins convinces us with his amusing examination of the speech patterns of passers-by in the streets. Outside of the Opera House, he has identified the accents and dialects of people from all over England, all the way to the furthest reaches of Empire, to India and beyond. The man is a wonder, but also funny and wonderfully stuffy and self-satisfied. He treats Eliza like an object–so he will never be her great teacher.  Freddy touches her heart, here, in this production, and sweeps her off her feet.

Higgins and fellow linguist, Colonel Pickering (an expert and compassionate Ryan Weible), have agreed to transform the “squashed cabbage leaf” of a flower vendor with her howling and screeching, her almost unintelligible English, into a most articulate woman—one who will past muster at the Duchess’s ball.  Shaw believes, in fact, that offering educated speech and a proper education to the “lowest of the low” will empower poor people.  All you have to do is climb—with the help of a devoted teacher–or two.

As we watch Higgins berate and beatify her with language—turning language into music and lyrics, with subtle transformations, we are following Shaw’s formula for universal learning and the end of social class divisions. When Higgins and Eliza sing about the fact that “hurricanes hardly ever happen / in Hartford, Hampshire, or Herefordshire,” we hear her picking up her “H’s,” beautifully. We are transported to those far away places where language and learning will become universal and break down the barriers between classes and cultures.

At that point a young man comes forward to complete her learning, one who already speaks in the accents of success.  From the first, Freddy Eynsford-Hill admires the budding grace and lively chatter of the earthy Eliza Doolittle. Her first and most loyal admirer, as played by Sale, he is struck dumb at the sight and sound of her at a tea party with his Mum and Sister. When Eliza begins to forget her pronunciation, Freddie pronounces her a master of the “new small talk.” She’s a fashion hit, and she has stolen the heart of Freddy, in the most charming way. Poor Freddy hangs about, waiting for her, “Here, on the street where you live,” sung seriously and sensually by Sale. All alone onstage, leaning against her closed door, in top hat and tails  and eyes aglow with love, Sale sells that song to the audience, with professional aplomb.

Watch the many marvelously detailed roles, including Mary Coleston as Mrs. Pearce, and Ann Kendrick as Mrs. Higgins. Just lean back and enjoy Shaw’s “Loverly” lessons set to marvellous music, selling us a sweet solution to social issues. Try celebrating “My Fair Lady’s” 60th Anniversary with love, at CCCT in El Cerrito!