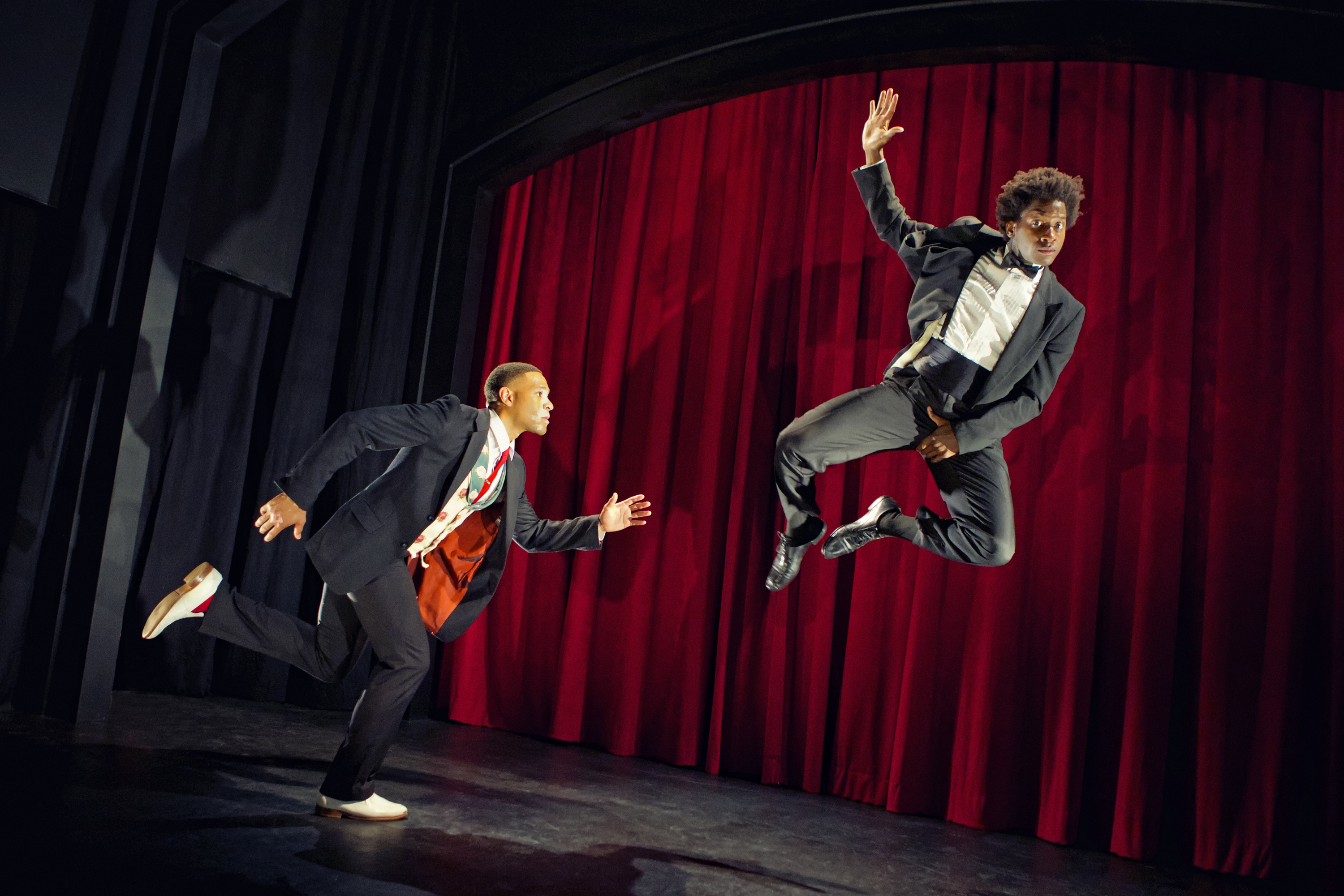 Young Jean Lee Looks at US Laughing at US

Young Jean Lee’s “The Shipment” (2009) is made up of four episodes involving ordinary family or friends who engage in what passes for stereotypical behavior in the lives of African Americans–or, maybe not. The play is written by  the phenom, underground darling Young Jean Lee, a Korean American playwright who digs up themes that will challenge her the most. She says that the most difficult idea she could find at the time was to write a play about African American stereotypes, since she has not experienced the prejudice and the rejection that is daily the lot of Black Americans. She is examining the racist and class stereotypes of the U.S.—with a satiric twist. The only way to appreciate the brilliant performances, the rich humor, and the sheer beauty of this show is to get down there right now. You will love it, too.

Lee begins with an acrobatic scene of strict and syncopated dancers, who leap into the air and perform parodies of Minstrel Show dances and “typical” Black performances from the past and present.  We get some incredible dance moves from the impeccable pair, William Hartfield and Nican Robinson, embodying the history of black dance and exploitation. Their leaps and sexual gestures strive to offend everyone, while they deliver their moves faultlessly. They suggest the innate power and resilience of Black culture and Black lives in the U.S.

But that’s not all.

Next, a single tuxedo-clad elegant comedian (Howard Johnson, Jr.) does an impeccable version of dance, acrobatics, and obscene remarks directed face on to his stunned audience. Johnson is powerful, unpredictable, and volatile—miming stereotypical gestures, and confounding our expectations by first fulfilling them, then pulling out the rug. His performance alone is a whole play. He embodies and announces all kinds of racist ideas and obscenities and tosses them, helter-skelter, both alarming and amusing, at the stunned audience.  In fact, he is pitch perfect and seriously stunning. Johnson practices a high form of comedy and satire, attacking and suffering, simultaneously. He’s the Hit of Show.

Soon, we get a domestic scene, featuring a chic, svelte Mom in a tight green dress (Nkechi Emeruwa), who is lecturing her obedient son (Michael Wayne Turner III). All the action in this shock journalism fable of a black son’s downfall is delivered in stilted and formal deliveries and gestures. We see how a quiet, aspiring, intellectual black youth, who clearly wants to be in school and study, winds up on the streets and then in jail. We are invited to doubt his seduction by the drug dealer and his whole life path, even as we know too well about the “school to prison” pipeline.

The nameless son (Turner) relates warmly but mechanically to his worried Mom, who is elegant and rigid, too. Why? Well, the usual answers don’t apply—he does everything right, he loves his mom, he does as he’s told. But he cannot resist the oppressive forces around him. He is so innocent, so lovable, so sweet—well, something’s wrong here. You want to throw up your hands, but that would be majority privilege, too.  Hard to know where story stops and you begin—Lee breaks down the usual barriers that we use to protect ourselves against becoming or even understanding the “Other.” Her work is comic genius.

The final scene—the most stilted party of office workers you ever saw–takes place at Johnson’s apt., where he uncomfortably greets the rest of the cast as his co-workers. They have odd and strained relations, and you soon realize that these formal and self-involved people are perhaps the dominant culture as seen through Black eyes. The whole thing goes by in a whirligig of ideas and posturing and attacks upon each other, in a most strangely comic and eventually hilarious vein. They are spot on with the “nerd,” the “femme fatale,” the “self-involved” personality–you have to be there to enjoy it fully!

At the party, the whole ensemble gathers to celebrate Johnson’s birthday party. But the host turns out to be a danger to them all—perhaps. The only woman at the party is the object of several men’s unwelcome approaches. Nican Robinson acts mechanically and formally, unable to connect with other humans. William Hartfield plays the marvellous, anti-social office nerd, richly. Each character fills another niche of how blacks may see a formal ruling class dinner party—possibly.