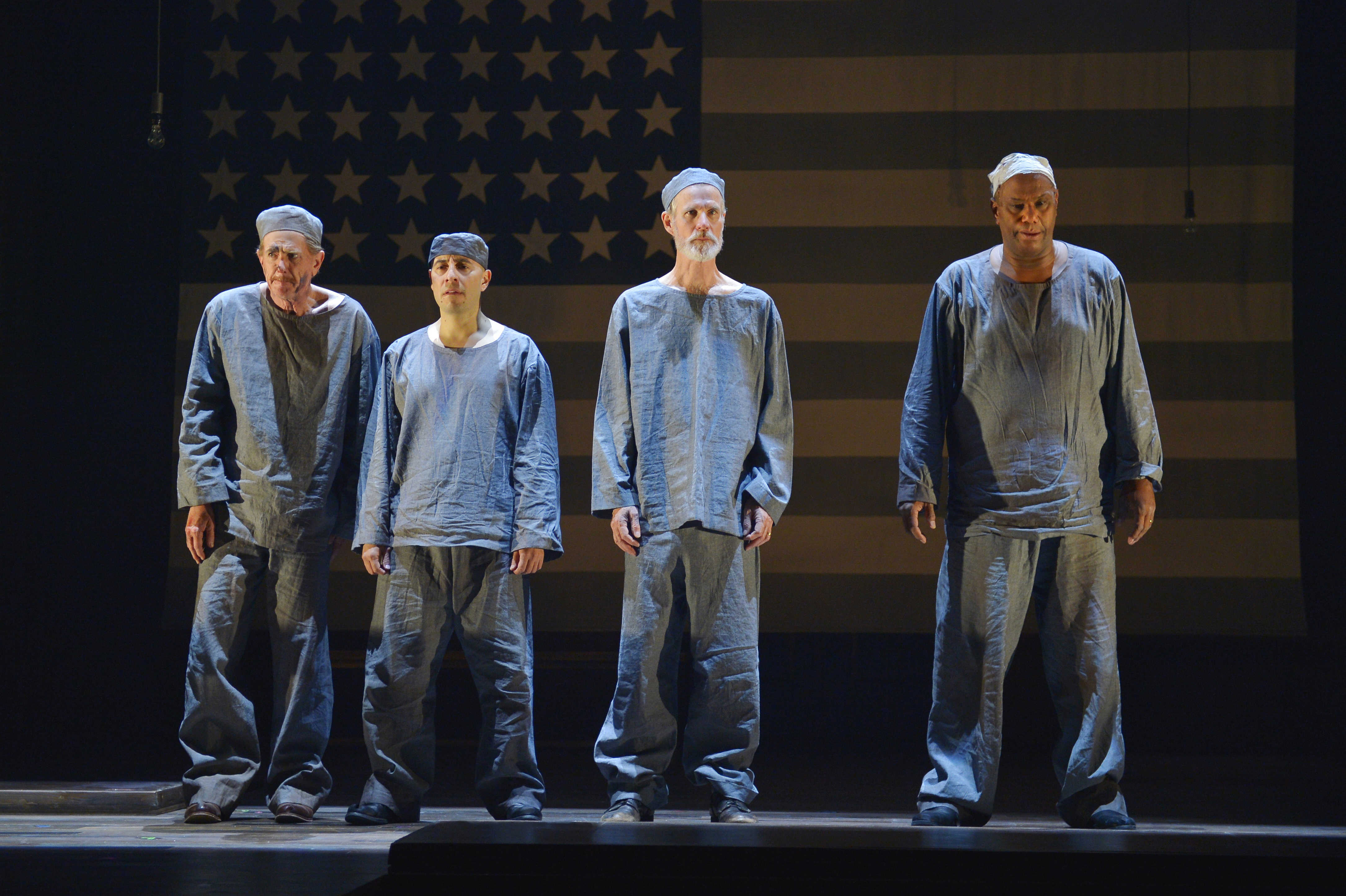 Sinclair Lewis’s 1935 novel It Can’t Happen Here still resonates with us 80 years later. The novel, adapted for the stage in 1936, by Lewis, himself, and John C. Moffitt, has been rewritten by Berkeley Rep’s Tony Taccone and Bennett S. Cohen. Director Lisa Peterson creates an engaging and fast-paced show, but the production faces a great challenge: How can they make a Depression Era futuristic warning against a dictator a moral guide for our time, rather than a summary of 30s dangers and fears?

Scenic Designer Rachel Hauck draws us in with the simple but massive and engaging set, something one might imagine on stage during the original adaptation’s first run by the Federal Theater Project in the 30s. The wide and tall brick wall at the back of the stage overwhelms the characters, who are made small and insignificant as citizens, during the 1936 election campaign.  Paul James Prendergast, composer and sound designer, unsettles the audience with an appropriately macabre and melodramatic score. The frenetic campaigning, involving the audience, begins to look like a 30s noir movie.

Franklin Delano Roosevelt is side-lined by a powerful grass-roots, populist candidate called Buzz Windrip (a lively David Kelly), modelled on the notorious Huey Long, the Trump-like Governor of Louisiana in the 30s. The townspeople of Fort Beulah, Vermont, scurry around fighting and fearing the coming election.

Doremus Jessup (Tom Nelis), the noble, liberal news editor of the small town newspaper, displays a sweet disposition and a heart of gold.  Aside from his romantic attachment to a liberal sympathizer (Deidrie Henry), Jessup carries the play, thanks to Nelis’s committed performance. Jessup faces off against his fellow Vermonters who are supporting the Trump-ish upstart. Windrop is splitting the parties and winning the election, forcing Roosevelt into a third party.  History is re-written before our eyes in this “Back to the Future” fantasy.

In his pre-election arguments, we see Jessup irate and shouted down. He is frustrated in conversation with his son (Will Rogers) about despot-to-be Buzz Windrip.

Jessup tries to protect his family from the post-election tyranny to come. The outspoken editor seems to be part of a small minority who can openly express their opinions, which we feel behind every line. Jessup’s honest rebellion creates a larger problem: the play is about Donald Trump.

Obviously, the production team has viewed this play as a great opportunity. In the program notes, Director Peterson reminds us: “There’s a political education; that’s what you’re watching.” While the parallels to the present election cannot be denied, the education is up for grabs. The play tells us that fascism is bad and that liberal ideals, such as freedom of expression, are good. Commendable as they are, these ideals need more than an admirably talented mixed-race cast to give the production a sense of novelty and drama. The play depicts the rise of fascism in the U.S. forcefully, but it comes across as rather formulaic and predictable, further blurring the sense that it can happen here.

The actors and designers demonstrate involvement and ardor for their cause. Acting and activism join forces on the stage and in the theater, as players and audience members cheer and boo during Windrip’s final campaign speech. In post-election scenes, we get a chilling replay of Nazi-era book burnings, using giant fire pits onstage. the pyrotechnics and violent police tactics are sufficient warning against what may come, it’s true.

For those who want to learn more about the Depression in America, and the dangers that can still come, this is a sweet summary and precarious prediction of future consequences. The Hillary forces will love it.  Sinclair Lewis’s novel brings us a lesson from the 30s: It Can Happen Here.

“It Can’t Happen Here,” adapted by Tony Taccone and Bennett S. Cohen, from the novel by Sinclair Lewis, directed by Lisa Peterson, at Berkeley Repertory Theatre, through November 6, 2016. Info: berkeleyrep.org