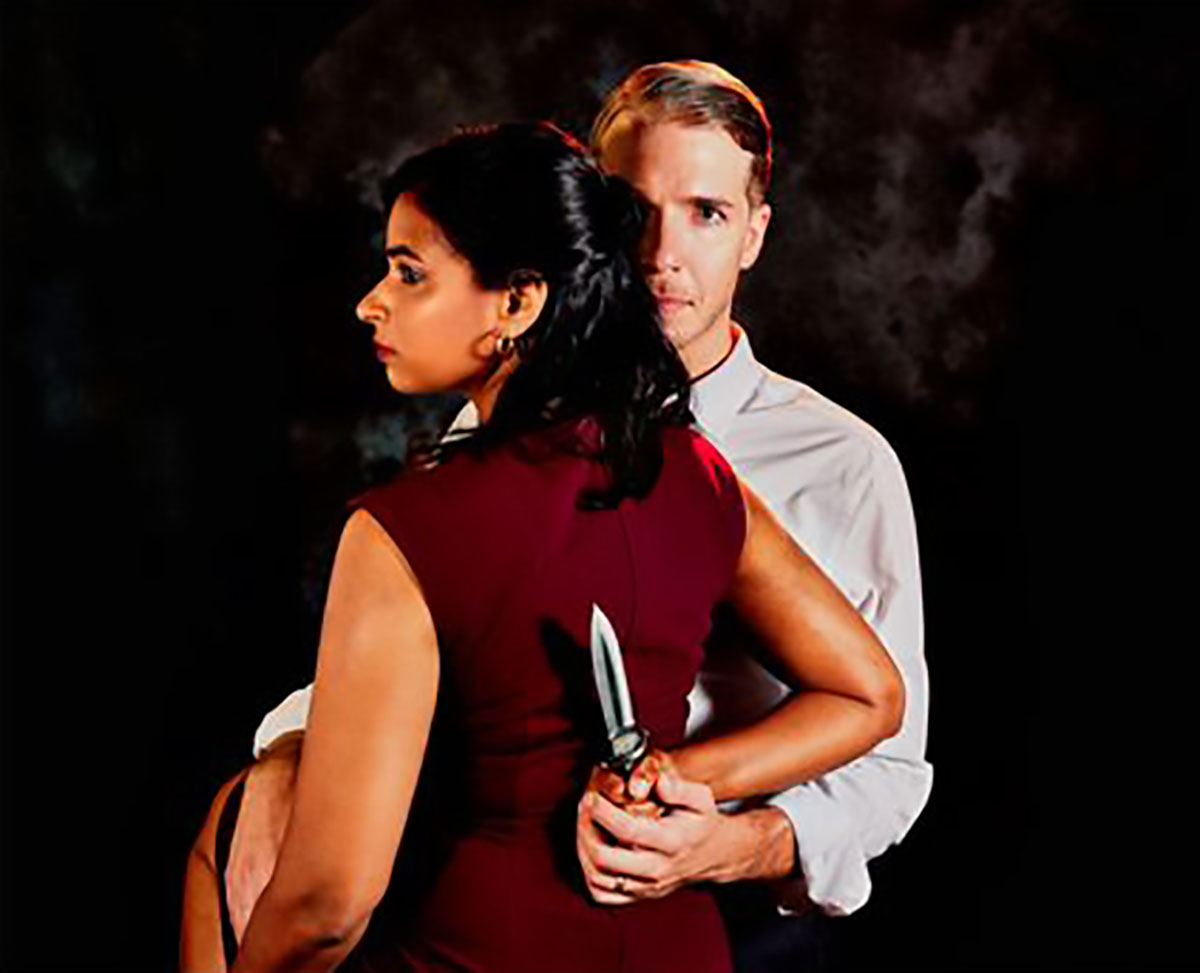 The Scottish Play Makes News in the Mission

What’s most important in a “Macbeth” production?  The words.  The immortal words!  Do we need a full cast, period costumes, detailed set?  Witches in rags?  Armor?  Not necessarily.

The Arabian Shakespeare Festival’s “Macbeth”  proves that a stripped down version can be thrilling and cohesive, even with extensive cuts.  Director Terri McMahon, a veteran of the Oregon Shakespeare Festival, started with the Oregon Shakes version, and then put it through rehearsals and revisions.  At the tiny Royce Gallery in San Francisco, a cast of six  actors whips us through the Five Acts and 26 scenes–in one hour and 35 minutes. And a thrilling “Macbeth” it is!

A simple and symbolic set gets us quickly to the existential essence of the play. We are enclosed in a tiny room where all the scenes play out. On the wall, Designer Malcolm Rodgers impressive set presents rolls of brown wrapping paper with large black lettering from a 15th century treatise by Thomas Starkey. The hand-written scrolls plummet dramatically to the floor, asking, “What is rightful sovereignty?” And they reply: “Law, Monarchy, Subjects, and Justice are interrelated and interdependent, all equally important, all equally essential, none predominating.”

And what could be more ironic than these words that evoke a settled and ordered state of harmony, under a benign political authority? These words of wisdom fly in the face of each scene, starting with the witches, who seem to approve violating the social contract. The witches’ primitiveness pervades all the actions that unfurl before us. Starkey’s rational words contrast and conflict with the the selfish and bloody acts committed by Macbeth (Teddy Spencer) and Lady Macbeth (Radhika Rao). Those noble words expose the Macbeths’ ambition as mere personal aggrandizement. These same vivid words remind us to think about our current election marathon.

Completing the set, a chain link fence provides a grim screen for the many entrances and exits. A large, blue, all-seeing EYE rides atop the fence: Is this the evil eye, or the eye of fate? Is this a supernatural symbol like the witches? A few raised steps add to the bare stage, with just a few props to carry us through Macbeth’s murder of Duncan (Kirsten Peacock), and his bloody ascension to the throne. Shakespeare presents three monarchs for us to contemplate: Duncan, the virtuous beloved ruler; Macbeth, the ruthless conspiratorial warrior; and Malcolm (Nicole Weber), a careful thoughtful youth, the nature of whose reign presents hope. But the dominating set drives home the crucial questions about monarchy, justice, and the common good. How will  these demands be demonstrated, or not, in our new king–or new President?

When the witches appear in the first scene, they are coiling and snaking around each other. Terri McMahon directs a marvelously economic and stylized choreography, evoking the primal world of these witches. Macbeth and Banquo (Nathaniel Andalis), coming off the battlefield in camouflage vests, meet the witches in amazement. The two warriors look like ordinary soldiers, today. Teddy Spencer’s Macbeth first appears to be soldier with no special ambition, and the witches’ prophecies only slightly prick his interest.  Then he is dumbfounded when their first prediction quickly comes true. But Macbeth is not a man who would act further on his own. There would be no story without his aggressive and manipulative mate, Lady Macbeth.

This is a sensual couple, locked in an early embrace; and unlike many more reserved portrayals, Lady Macbeth adores her husband. She acts to further their marriage partnership, but ends up splitting it into two mad orbits. She sees the opportunity that will transform Macbeth, and seizes it, only to find that she has pushed him to the edge of sanity. In the dinner scene with Banquo’s Ghost, she must confront her husband’s public disintegration. She realizes that she was mistaken to goad him onward. Her added strength is not enough to bolster their enterprise. Finally, she dies a lost soul, felled by her own mistakes and her greed for power.  Does she at last regret their inhuman, greedy grasping?

Teddy Spencer gives us a reflective Macbeth who gets in over his head, and then dissolves in paranoia. He is fiery in the early scenes, but sputters out as he understands what they have done. When Macbeth says, “I have lived long enough; my way of life is fall’n into the sere, the yellow leaf,” we feel his exhaustion, and a touch of self-disgust. He has no more choices, but to fight blindly to the end; but he seems defeated before he starts.  Had he won that fight, we wonder what his winnings would be.

The rest of the cast, William J. Brown III, Nicole Weber, Kristen Peacock and Nathaniel Andalis, adroitly fill out many roles, switching characters sometimes within scenes almost seamlessly. They change props and signature costumes quickly to match the swiftly paced production. For the lone touch of comedy, Brown treats us to a truly goofy Porter at the Gate.

Finally, as Macbeth redons his camouflage vest and arms himself for the final combat, what man does he face?  No man, but Kirsten Peacock, as Macduff, in the final fight choreography that takes out Macbeth. Heroic Macduff, portrayed by a woman, ends the bloody swath that Macbeth has carved. Given our present political presidential fight, this gender casting speaks volumes. For we are also concerned today with vaunting ambition, moral legitimacy, and the path to the throne. We must ponder which combatant will win our time.  Will the strong female prevail, or will the ambitious tyrant carry our political system forward?  Scary times.  See this “Macbeth” before it closes October 16, for the striking direction, fast pace, and earnest cast.