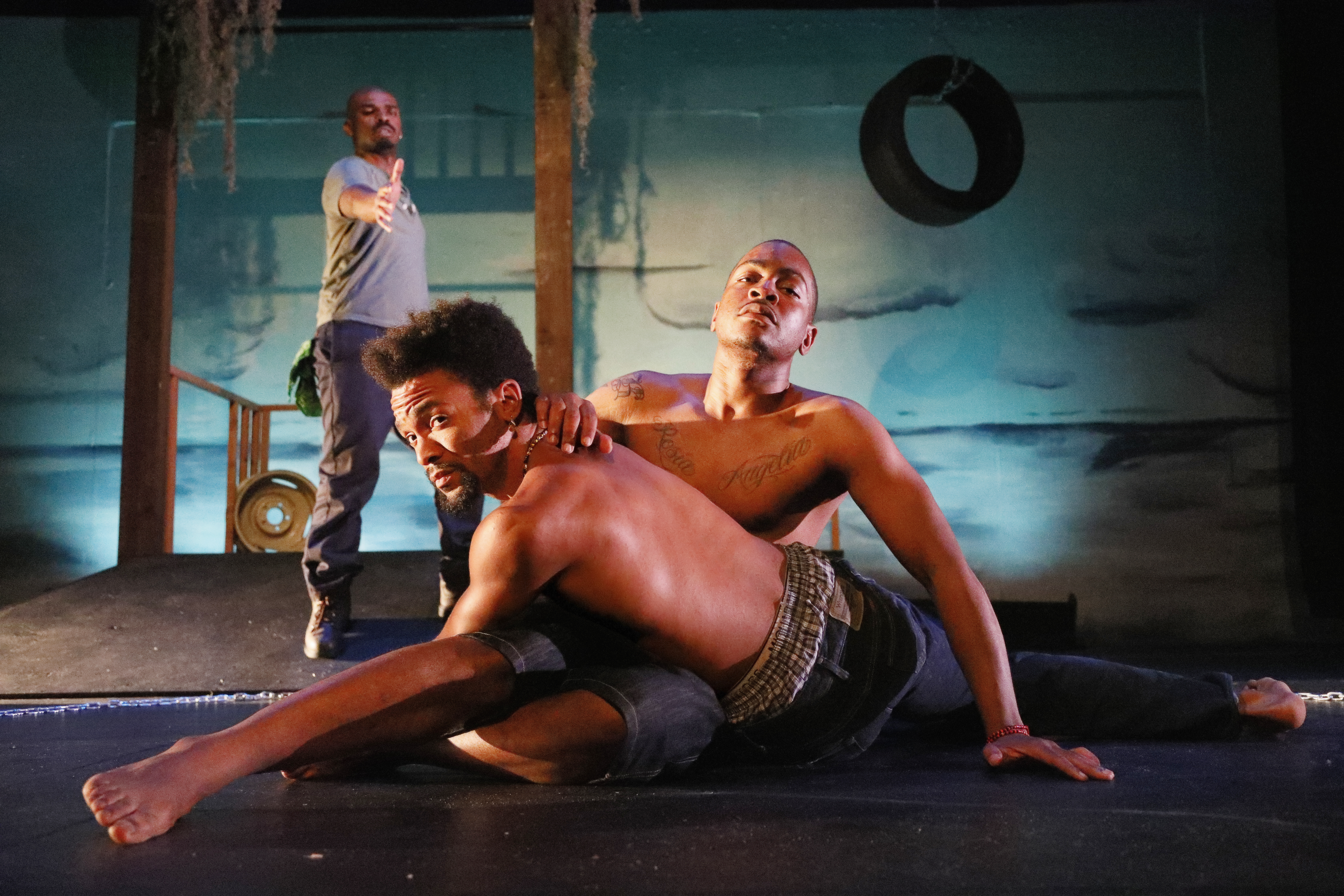 What a show.  Could it be better, more moving or more passionate? Three powerful actors put their hearts and souls into examining and probing a southern U.S. story of separation, oppression, and rebellion. The set suggests a bare bones backwater shack, where Ogun Size (a boisterous, commanding LaKeidrick S. Wimberly) operates a rundown auto auto shop out at San Pere, Louisiana, near the bayou. Playwright Tarell Alvin McCraney places his story in “Time: Distant present,” which tells us that he has a message for US in “The Brothers Size.”

If you want to understand what oppression means in  Black lives, this play can do that for you. McCraney uses his famed poetic language and spiritual insight to bring the lives of three young men out of the bayou into our hearts. Director Darryl V. Jones has done a magnificent job of depicting lives that reach back to ancient roots and forward to a “distant present.”

Ogun Size is a big, muscular, rule-bound guy who is rough and rugged and proud of his solitary, independent work in his shop. But now, his restless, black sheep of a brother, Oshoosi Size (the multi-talented, graceful Gabriel Christian) has returned from a couple of years in prison, dreaming of freedom and adventure. You cannot imagine two more opposite brothers: Ogun, who is a devoted moralizing hard worker, and Oshoosi, who yearns to escape from the bayou boondocks. One has his careful mind tuned to living through a miserable present. The other has his face turned upward to a possible future.

Their interaction on Margaret Adair MacCormack’s  sparse, skeletal wooden set depicts a dreary life and little to hope for. A rope hangs in the middle, suggesting a hangman’s noose against the bright blue sky.  Darryl V. Jones has directed a tone poem of a show, featuring African dances, music, and mythology, reaching back to the folklore of the Yoruba people. The inner turmoil and the social exclusion of these brothers is reflected in the powerful dances inside an iron chain on the ground—sacred territory where they can express hidden feelings.

Ogun orders his younger brother around, crudely—and Oshoosi feels ground down under his brother’s demands. He appreciates the tough love, but he cannot handle it for long. He wants to sleep, to dance, to travel to new places, like Madagascar, which he saw in a book in prison. Oshoosi dreams of flowers and seas and girls but he is trapped in a dark place. Oshoosi smiles, he embodies the Yoruba hunter: he bares his beautiful body and dances like the wind. Christian makes us believe in the genius of the younger brother. We begin to understand how his spirit is being crushed by the conditions of their life. He is a bird trapped in the backwoods, struggling to escape. Christian makes us understand what oppression means in their lives, even if we have not been there. The brothers come closer, but they can never agree.