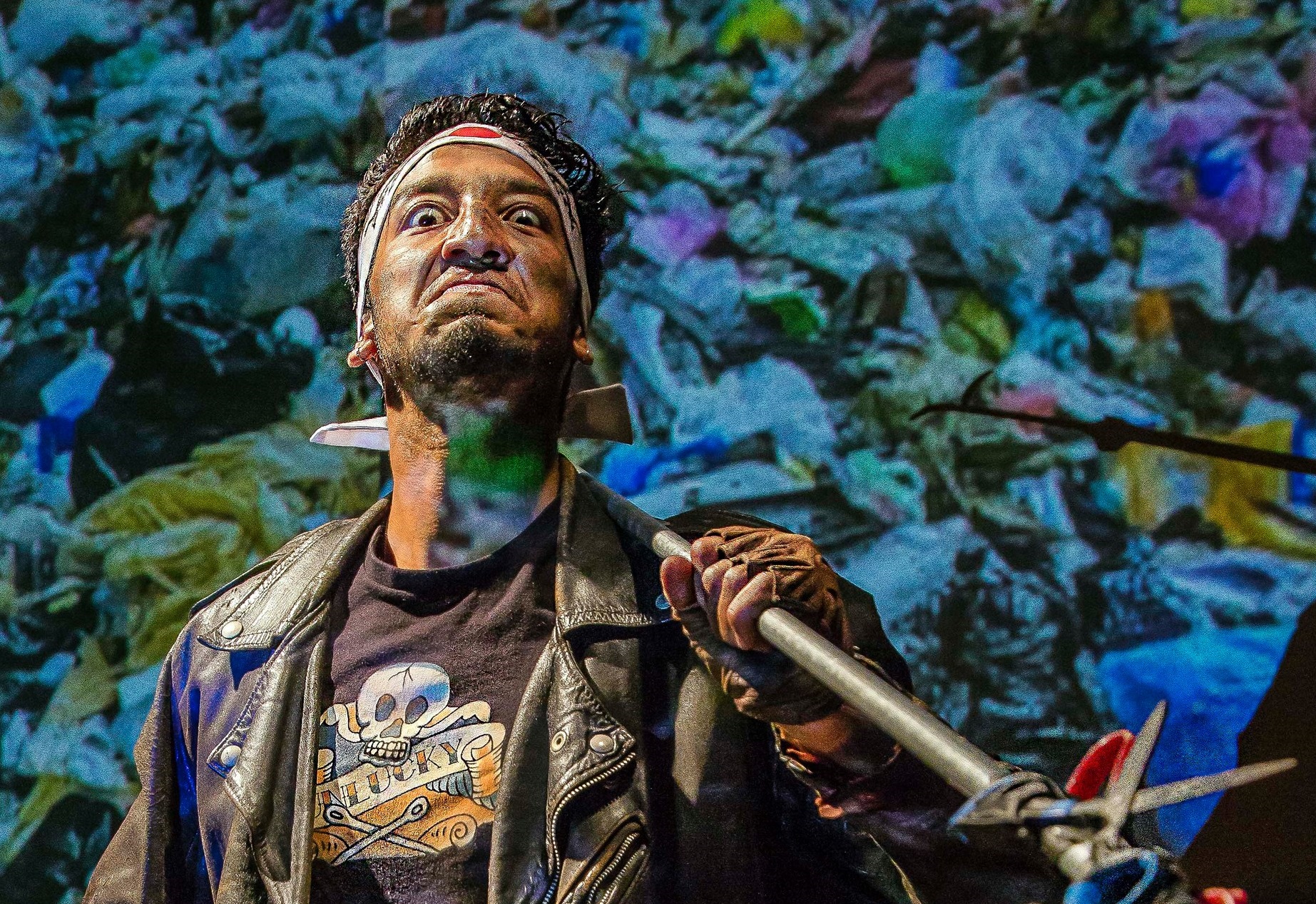 Mexico Emerges from the White Box

Theater-goers know Black Box Theater: a simple, unadorned performance space, usually a large square room with black walls and a flat floor. “Into the Beautiful North” by Karen Zacarias took me to Mexico in the White Box Theater that is the Berkeley City Club. I know from experience to succeed in this space requires a riveting story, expressive acting, and compelling effects to make up for a bare room without scenery, and a play delivered in the round. Zacarias’s play and Gary Graves’ direction transform that bare room in the Berkeley City Club into a rare and special experience.

Playwright Zacarias has produced stories of Latinos and Latinas, bringing them a new importance in American theater. Based on the novel by Luis Alberto Urrea, the play follows a trio of Mexicans whose narrative crosses back and forth from Mexico to the U.S. It’s an odyssey led by the young Latina, Nayeli (an inspired Samanta Yunuen Cubias) , who vows to save her hometown from roaming “Narcos.”  Romantically inspired by the movie The Magnificent Seven, she sets off to find The Seven Mexican Heroes who can save her community. Even more romantically, she is trying to find her absent father, who left years ago, to seek his help, too.

With just a few phones and chairs for a set, Nayeli and her compatriots build a village of the mind. As they show us around the town, we must imagine a movie house that’s been closed down by the richest man in town; and a cafe that does not serve alcohol, but boasts the only computer and internet connection. At the café, the “Narcos” steal their lap-top, their only connection to the outside world. Hemmed in, with defense, the town of Tres Camarones clearly needs help. Fierce, grounded, determined, and trained in martial arts, young Nayeli seizes the chance to save her town and to find her father in “Los United.”

This could be her chance to escape the little world of their unassuming Mexican village. As Nayeli says, “People like us don’t get Beverly Hills, marry Johnny Depp, and get makeovers.” Her compatriots in this escape are: first, the café owner, Tacho (a hilarious Rudy Guerrero), a preening, love-starved, and thrill-seeking gay guy who is willing to leave town to find a love-life.; and second, Vampi (a scowling Kitty Torres), the Latina turned Goth, with headset at the ready to chill out the scene with rock. These are her loyal and innocent warriors on the trip into the beautiful North.

To cross the border the trio must writhe across the floor through an imaginary tunnel. They run into colorful characters who either enable or foil their plans along the way. Finally in the U.S., Nayeli finds herself on her own when Vampi finds her true love and takes up housekeeping. And Tacho needs to see the sights of Disneyland and local disco hangouts. Of the trio, only she remains dedicated to the mission of finding Seven Magnificent Mexican Heroes to save Tres Camarones.

The unlikely plot is bolstered by a wild assortment of sight gags and comic characters who buzz in for a quick turn, and then exit for the next costume change. Ben Ortega appears first as Chava, the rich movie house owner, later as a Border Patrol officer. Our original drug dealers, Carlos Barrera and Caleb Cabrera, appear as Matt and Atomiko, respectively. Leticia Duarte stands out as Aunt Irma, the town mayor, captivating us who captivates us as a mature and forceful Latina.

As they travel by car to the border and across, they pantomime the travel uisng only chairs. Clever directing, lighting and sound effects bring us into the vehicle and into the hilarity of their adventures. In the finale,  ensemble players give us a tour de force with their lighting fast circling of the stage and quick exits, reappearing with different hats and T-shirts, at a breathless pace.

Rudy Guerrero becomes a star as the ever-adorable Tacho, searching for a happy uptick for his life as a playboy adventurer and café manager. He inspires the ups and downs of the mission and keeps the action on the upswing. And Nayeli, a “new kind of Latina,” becomes fierce in a youthful way, proud to be a woman. She learns to fight according to her own rules: she dominates and commands our respect. Hurt and bewildered by her father’s abandonment, she emerges from that rejection with the self-respect and confidence to support and befriend the others who love her.

It’s well worth the trip: take the voyage, hang in, and catch this odyssey of characters surmounting daunting odds on both sides of the U.S.-Mexican border. Visit the “White Box” at the Berkeley City Club, and take a ride on a new kind of border story. “Into the Beautiful North” by Karen Zacarías, is based on the novel  by Luis Alberto Urrea. Directed by Gary Graves at Central Works, at the Berkeley City Club, through Sunday, November 13, 2016.  Info: centralworks.org