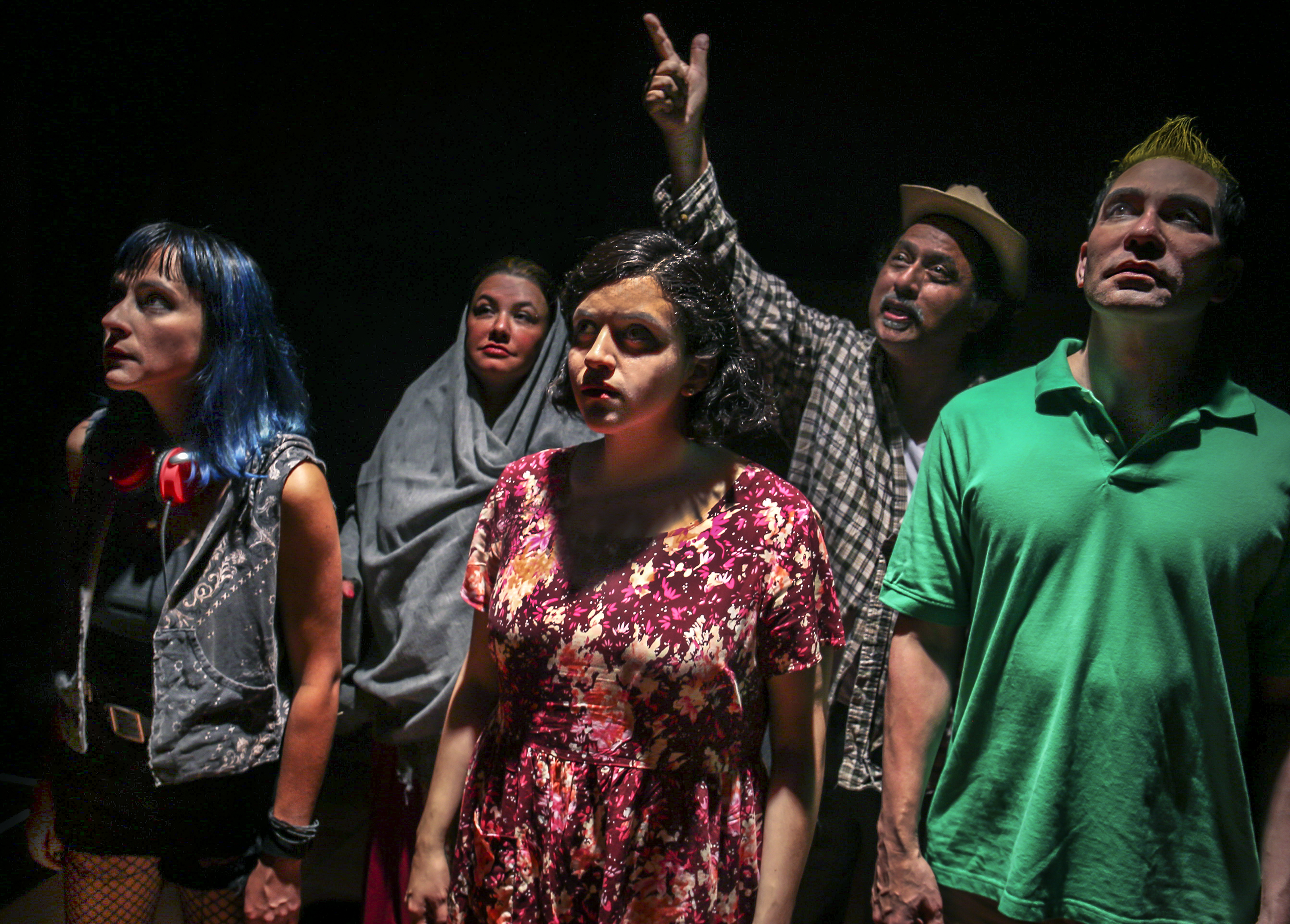 As I enter the elegant Victorian parlour at the Berkeley City Club, currently occupied by Central Works, I am immediately struck by the intimacy of the room.  There is no stage or set, just a couple rows of chairs on four sides and some choice lights. The stone parlour in Julia Morgan’s “Little Castle” provides an old-fashioned setting for a new agit-prop play. “Into the Beautiful North,” a National New Play Network Rolling World Premiere, grows out of a partnership with Milagro Theatre, Portland; San Diego Rep; and 16th Street Theater, Chicago. The world crosses borders in this intimate acting space.

When the show begins, a young girl, Nayeli (the endearing Samanta Yunuen Cubias), introduces us to her little village of Tres Camarones, on the seacoast of Sinaloa, Mexico. In the village, life is closing down all around her. Almost all of the men have already left for the North, for “Los United,” and the town is vanishing.  Our young protagonist works at the village’s only internet café “La Mano Caida,” owned by her dear gay friend Tacho (the delightfully keen Rudy Guerrero).  Tacho is not only her boss but a kindred spirit and the only known homosexual in Tres Camarones. His café and its suggestive name proclaim  his bravery.

First, an armed drug dealer and a corrupt cop steal Tacho’s only computer and ridicule him. Then, Nayeli declares that the village’s main problem is the absence of men: they have no protection, any more.  All the men have gone “to the beautiful North” for  opportunities and a better life.

Nayeli’s assertive aunt Irma (the dominating and funny Leticia Duarte) gets elected Mayor; while raising her niece to be strong and to protect herself. But Nayeli fears that her little village will be overrun by “Narcos” and  disappear altogether.  Three friends decide they have to save  their beautiful town,  where “God himself comes  from.” Inspired by a screening of the classic western The Magnificent Seven, Nayeli devises a plan to head north in search of seven men to become the village’s protectors.  She wants to put Tres Camarones on the map.

Like  “three sisters in solidarity,” Nayeli, the jiu-jitsu warrior; Tacho, the gay warrior; and their friend Vampi (a brooding Kitty Torres), the Goth warrior, set off together. With only a little money, a bag of M&M’s, some shampoo, and a jar of Vick’s Vapo-Rub, they enact a cartoon version of what really happens when you try to travel “Into the Beautiful North.”  What follows is a wonderfully humorous and heartfelt story that is comic, yet epic in  scope. The characters speak directly to the audience and draw us into their world, taking us on their quest.  The journey is hilarious while still achieving moments of gravitas and poignancy.  We see the harsh realities of immigration, sexism, racism, and homophobia on their comic journey. We also see  the beauty of the world through the kindness of strangers. They  even experience the wonder of  falling snow for the first time.

Karen Zacarias tells her satirical tale with simple tele-novella techniques,  yet she manages extraordinary storytelling.  Who needs a huge set when you have wonderful source material like Luis Alberto Urrea’s acclaimed novel? Adapting a 400 plus page book into a two  hour play is no simple task, but writer Zacarias makes it seem easy through the shared narration of colorful characters painting a  multicolored mural of words. The American theater needs this fast-paced cast, who remind us of Don Quixote’s quest, including characters from varied origins, sexes and ways of living.   “Into the Beautiful North” gives us a wealth of independent Latino characters: strong and complex Latinas; a resourceful gay Latino; and a warrior worthy of Cervantes.

If you can see this show, don’t hesitate!  You will laugh, you may cry, and hopefully, you will comprehend a bit of the lives of people who have to cross many borders. Their missionary message tells us that “Borders are imaginary and anything is possible.”

“Into the Beautiful North” by Karen Zacarías, is based on the novel  by Luis Alberto Urrea. Directed by Gary Graves at Central Works, at the Berkeley City Club, through Sunday, November 13, 2016.  Info: centralworks.org