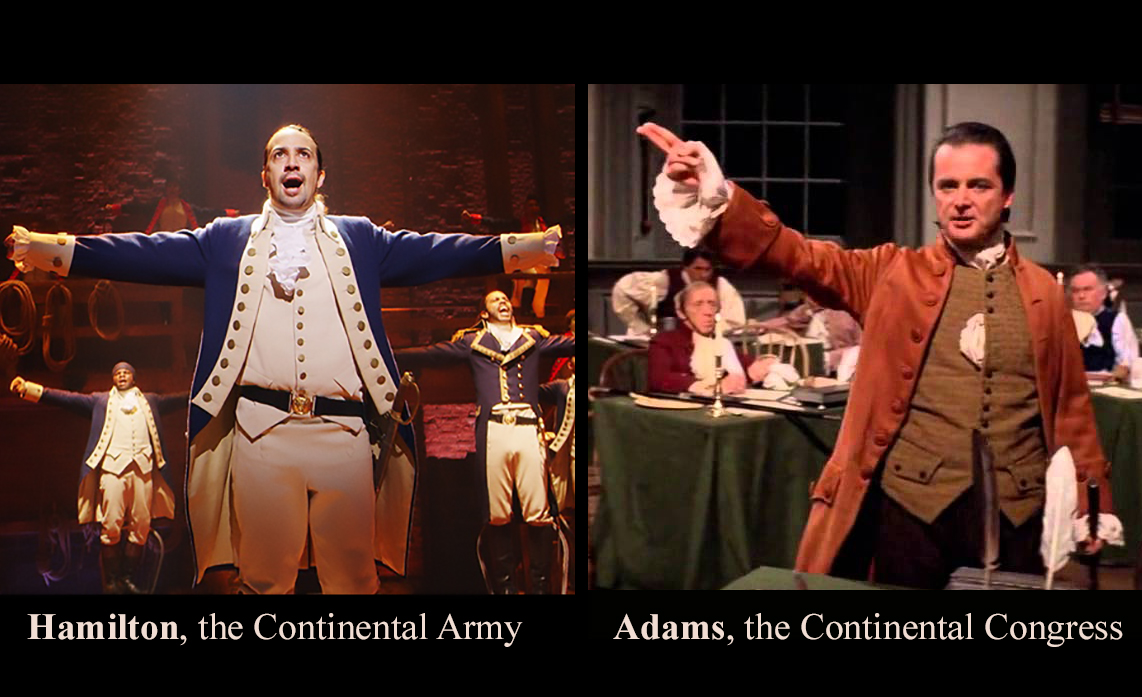 Although “Hamilton” tickets are about as scarce as a downpour in the Bay Area, “1776” is now popping up all over, riding the “Hamilton” coattails, with tickets available at South Bay Musical Theatre in Saratoga and Spreckels Theatre in Rohnert Park. Lesher Center in Walnut Creek closed their “1776” production just before election day on November 5.  We know “1776” is riding the newer show’s coattails because “1776” had already been on the scene, with two stellar Bay Area revivals in the 2013-2014 season. Revolutionary theater is in the air, fueled by our  incendiary presidential campaign. “Hamilton” has caught the imagination of a new, younger audience and spread to Broadway. It has defied historical conventions and celebrated our founding fathers through the racial and cultural diversity of its cast.  This is a ‘casting of inclusion’ that works to bring a white male history lesson to the diverse USA of today.

Can this casting revolution work for the more conservative “1776”?   In 2014, an all-female version already achieved acclaim at Tabard Theatre Company in San Jose–speaking of risky gender casting! Celebrating historical tampering, the all-female Tabard revival dares history as much as the ethnic diversity of the “Hamilton” Continental Congress. The traditional story of powerful white men portrayed by women connects us to our current political landscape, and gauges where women’s voices can be heard today in our Congress.  How far have we women come?

For another wave of color-blind casting, New York City Center just mounted a racially diverse “1776.” The “Hamilton” style of “we’re all in this democracy thing together” has certainly caught the spirit of our time.  Multi-ethnic casting across these two shows can make your head spin. In “Hamilton,” Miranda deliberately echoes “1776,” quoting the Congress admonishing John Adams: “Sit down, John! Sit down, John!” citing the opening line of the most famous song from “1776.”

While both shows present the Revolutionary War and the signing of the Declaration of Independence, they treat the time and events in opposite ways. Being well-acquainted with “1776,” I wanted to see how the newer “Hamilton” would compare, and to find the secret of its popular rage, today.

From the opening number, I was shocked with the driving pace and street energy of “Hamilton,” and the fire hydrant flow of lyrics, which rarely flags through the three- plus hours of the show. Production values soar, with astounding lighting, dance, hip-hop acrobatics, and period costumes. Hamilton is the centerpiece, surrounded by revolutionaries played by the now famous multi-ethnic stars of today: Lin-Manuel Miranda, Daveed Diggs, Leslie Odom, Jr., Phillipa Soo, and others. They flash at us with dances that break down our schoolbook history of the Revolution. Suddenly, it’s an up-dated revolution against authority, again! Occupy Broadway!

“1776” of course has all of these production values packaged in a traditional and conservative mold.  Hilarious songs, an intense diatribe on slavery, and a revolutionary soldier’s lament fill out the production numbers. But the fire of “1776” does not lie in dance and song.  The crown of “1776” is Peter Stone’s brilliant, witty, and well-paced book. His version of the Continental Congress that rallied and stood up to Britain carries the day.

The two shows have a different focuses, revealed in their radically different stage settings, above. One set is crafted for a group of men, while the other highlights the rise of one man.

Although John Adams predominates in “1776,” we get to know each of the 20 congressional representatives who overcome their inertia, fear, and political differences to unite in a “treasonous” cause. In “Hamilton,” Miranda finds a star turn at last for the forgotten forefather, Alexander Hamilton.  Miranda has created an inspirational hip-hop and musical tale of personal and historical ascendance.  Around Hamilton, swirl the men and women who help him come up, counsel him, wed him, and love him.  And ultimately the man who killed him. Although his is a worthy story of one man’s ascent, the other important colonists of the times are etched in brief cameos or parodies:  Lafayette, Jefferson, Washington, Madison. These revolutionary heroes are also portrayed as flawed men. In “1776,”Adams is respected as a patriot by his colleagues, but also vilified as an agitator. Adams guides us on the journey to declare independence for the colonies, the army, putting England and the world on notice.  Although Adams foresees the impossibility of convincing the Congress, his zeal for separation from the British tyranny presses him forward to develop a new form of government. In the first lines of “1776,” as he disparages the Congress, Adams demands that God help him persuade a recalcitrant, opinionated, and easily distracted Continental Congress:

…by God, I have had this Congress! For ten years, King George and his Parliament have gulled, cullied, and diddled these colonies with their illegal taxes! Stamp Acts, Townshend Acts, Sugar Acts, Tea Acts! And when we dared stand up like men, they have stopped our trade, seized our ships, blockaded our ports, burned our towns, and spilled our BLOOD! And still, this Congress refuses to grant ANY of my proposals on independence, even so much as the courtesy of open debate! Good God, what in hell are you waiting for?                                          (Peter Stone, “1776″ lyrics)

With half the Congress against him, Adams refuses to give up and finally drives a unanimous vote for independence, by compromising on basic values: property, ethnicity, and most morally repugnant, on slavery. A key song in Act II drives home the complicity of the Northern colonies in approving slavery.  Boston turns a blind eye or worse to the shipping of slaves to the Southern plantation owners.

While Northerners might not own slaves themselves, they profit from the rum and slave trade in Africa and the Caribbean.  The prejudice, self-interest, vanity, and profit-taking of many Continental Congress representatives is revealed. These men were the cream of the colonies. But they are prone to more human foibles than we want to admit.

“1776” glosses over some historical facts to serve the drama. But the debate and compromise of the Continental Congress in ratifying and embracing the Declaration of Independence remains the kernel of the plot. A broad emotional arc carries us to new highs: the burlesque of “The Lees of Old Virginia” and the ecstasy of “He Plays the Violin.” The emotional arc eases us down with the pathos of “Mama Look Sharp” and “Molasses to Rum.” And the final miracle of consensus makes a stirring finale as we see projected the names of each of the signers of the Declaration. “Hamilton” is about… of course, Hamilton, and his evolution from a poor, illegitimate immigrant to a major leader, full of inspiration for the creation of our country. Hamilton’s story has galvanized our youth and energized a movement toward getting ahead in life. And “Hamilton” tells us about Aaron Burr, who almost steals the show.

Burr is the friend who can charm you, help you, connect you, and then turn on you. Burr is the friend you must break with in order to realize your own gifts. “Hamilton” shows the same figures as “1776,” Jefferson, Washington, Adams, but with less reverence. The newer show presents a back-to-the-future history lesson on guts, brains, luck, and drive. These qualities best define the show’s complex hero, Alexander Hamilton, who rises from the ignominy of his early years of labor and alienation to become one of our revolutionary founders.

Hamilton’s story is, indeed, astounding. His background haunts him as an adult. John Adams called Hamilton “the bastard brat of a Scottish peddler.” But he takes every advantage to move up.  His work and his capabilities  make him Washington’s right hand man.  And the theme of an immigrant’s making good, searching for and using his opportunities, and maximizing his position, has resonance today. In our diverse world, this Hamilton can inspire–best revealed in his song, “My Shot.”  This is street talk!  Can we see a new Hamilton in his song?  The popular response to the show votes for Hamilton’s poignant cry:

I am not throwing away my shot
Hey yo, I’m just like my country
I’m young, scrappy and hungry
And I’m not throwing away my shot
I’m ‘a get a scholarship to King’s College
I prob’ly shouldn’t brag, but dag, I amaze and astonish
The problem is I got a lot of brains but no polish
I gotta holler just to be heard…
I’m a diamond in the rough, a shiny piece of coal
Tryin’ to reach my goal…

It’s Revolution time and the tone is hot. Emotions flare. Passions roar. Deeds are outsized. Hamilton men are bold and daring–full of street attitude. But are these figures really historical or are they our contemporaries? And if they are more like our contemporaries–young and scrappy–is that why this show is so beloved by a new, younger audience?

Portraying Hamilton’s infidelity seems a curious choice, and a piece of biography that could remain personal, rather than becoming a vehicle for our empathy. His escapades and relations with women encourage us to focus on his personality more than on the epic achievements of the Federalist Papers. On the other hand, “Hamilton” presents defiant women who break the mold of subservient 18th Century wives.  If not historically correct, this feminist portrayal excites and inspires.

More traditionally, “1776” never lets us lose sight of where this musical is going and what the Congress wants: Independence from England.  Contra Costa Musical Theatre has opened with a traditional presentation of “1776” with a traditional cast, period costumes, and a stage set that frames the hot, fly-ridden meeting room in Philadelphia. In a bow to the new Hamilton style, the pre-show music mixes The Beatles “Revolution,” Rap, and Hip Hop numbers not so easily identified. CCMT presents a mash-up of styles that seems intrusive rather than trendy.

But once CCMT’s “1776” begins, we are swept up by the personalities and the issues of the U.S. Colonies. We see them trying to forge new alliances and contemplate a new unity. Staunch Abigail Adams supports her man through disease, crop failure, and lack of sewing pins!  When John is in despair, she stiffens him with the steel of her own character, and she works at home in Massachusetts to mix salt-peter for the war effort.  Martha Jefferson revels in the romantic moment that sweeps the end of the first Act into something like bliss.  These are women who willingly support men, and make the men their destiny.

The acute characterizations of the men, painted with the quick brush of musical comedy, make “1776” compelling and unforgettable.  Disparate personalities, elite and common stations in life, wildly varying  philosophies and entitlements finally meld into an agreement to create revolution.  It’s a fascinating study for our own times when politics seems so removed from compromise and concord. And what Hamilton may lose in authenticity and character development it achieves in lifting the American “Can Do,” “Come from Nowhere” spirit. It gives voice to a diversity which our founding fathers could never have imagined. In the wake of this most divisive and shocking election season, we need to go back for inspiration to the beginning. We need to be reminded of the fights, debates, and compromises that led to the founding of the nation, on display in the musical “1776.” Just when many citizens feel their country is broken, we will have both the “Hamilton” and “1776” productions to take us back to our roots, to help us reflect on the present and our future.  What a year to ride the “Hamilton” rising star, and indulge in the many stories of our nation’s roots in “1776.”  Don’t miss either of these shows!