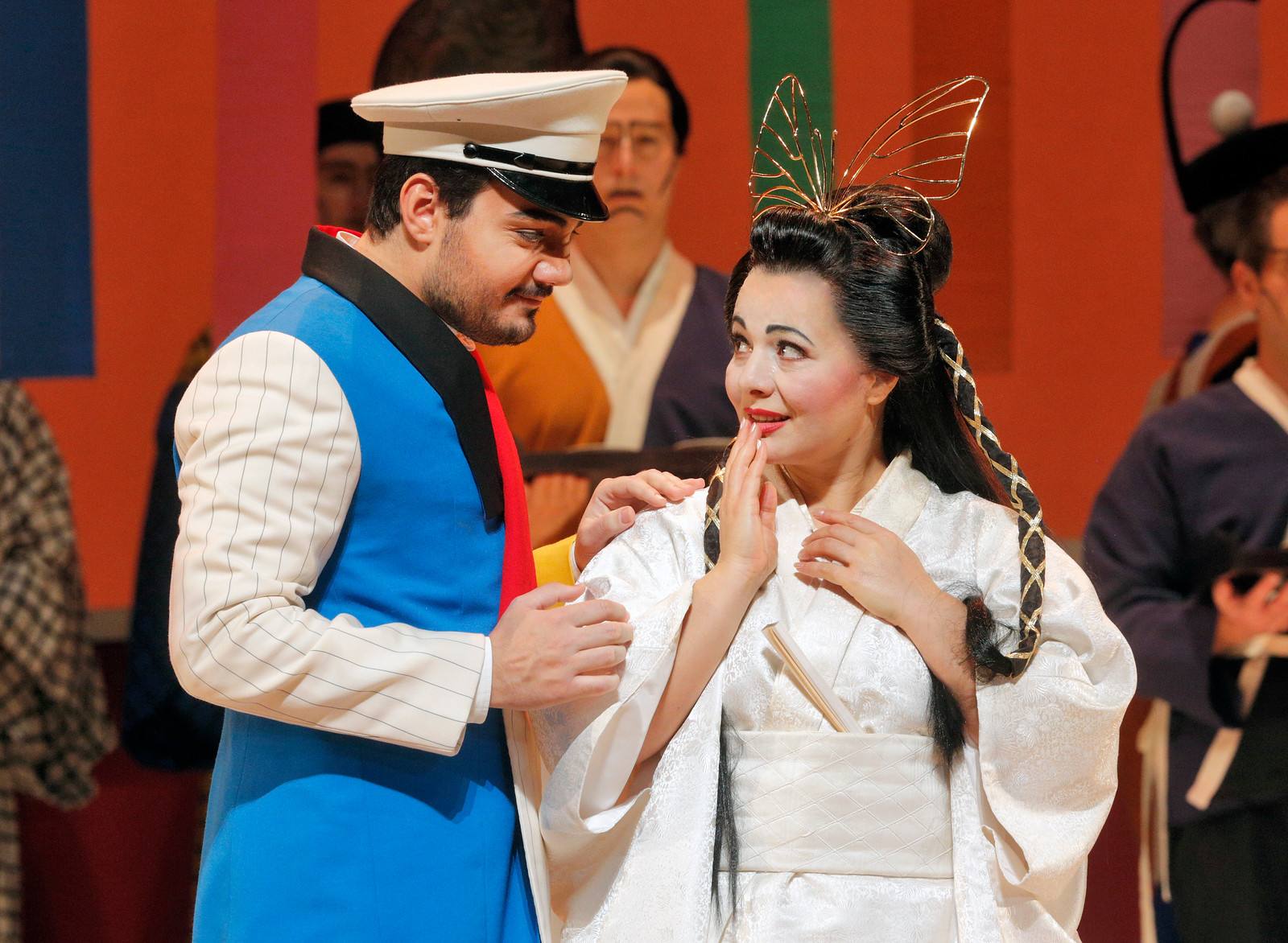 Cio-Cio-San’s first entrance captures the audience after a scene between Pinkerton and a not-so-convincing marriage broker Goro (tenor Julius Ahn). The richness of her voice, combined with her grand gestures and bold expressions, convey her joy and love. Haroutounian’s passionate portrayal of Madama Butterfly moves us to emphathize with her impending doom.

Designed by Japanese sculptor Jun Kaneko and revived from the 2014 production, the whimsical, modern stage set design blends contemporary with traditional Japanese art, creating a mystical, yet familiar ambiance. When day breaks, the backdrop glows in brilliant yellow and orange. Circles on the floor radiate outward from a simple elevated platform. We watch a wooden screen, which signifies a simple Japanese house. Across the back of the stage, a ramp swirls across the stage. Three illuminated screens drop down depicting swaying blue waves for the lulling sea. “Invisible” kurogo, traditional Japanese stage assistants, bodies and faces veiled in black, appear between scenes, holding and moving props. The set becomes a piece of modern art in motion, and a joy to watch.

The modern set complements the spirited orchestra conducted by Yves Abel. A fifteen-minute musical bridge connects the original second and third acts, rather than a second intermission. During the famous and haunting “Humming Chorus,” abstract images on the screens portray the ocean waves and traditional Japanese art. These images transmit beauty but do not suggest that night is passing into daybreak. The audience would do better to close their eyes and just enjoy the music.

Director Leslie Swackhamer brings fresh elements in to invigorate each scene and build up character relationships. Mezzo-soprano Zanda Švēde plays Cio-Cio-San’s maid, Suzuki, with a wonderfully rich voice that pairs perfectly with her lady’s. During the “Flower Duet” in Act II, Cio-Cio-San and Suzuki prepare for Pinkerton’s arrival after a three-year absence by sprinkling flower petals through the air. Their voices blend beautifully, standing amidst the falling petals. Cio-Cio-San’s three-year-old son “Sorrow”  (the adorable Ayla Cashman), plays gaily in the flowers, adding a genuine sweetness.

Bright, bold colors of pink, yellow, and blue, in the geometric patterns of the costumes accent the ever-changing illuminated gradient backdrop on the vast Opera House stage. However, Pinkerton’s multi-colored patchwork suit and Sorrow’s oversized pink straw hat distract from the traditional Japanese setting. Though the modern set is a lovely sight to behold, we feel removed from the realism that Puccini portrays through the story and music.

“Madama Butterfly” is a tragic and moving opera about the perils of youth and love, under the pressure of militarism and colonialism. Pinkerton’s presence as the imperialist American is underscored, ironically, by Puccini’s musical references to the “Star Spangled Banner.” While the anthem celebrates the U.S. revolt against Great Britain, here it underscores U.S. dominance over Japan.

Pinkerton’s departure and indifference to the young and naive Cio-Cio-San remain poignant and pitiful, anything but triumphant. Cio-Cio-San commits suicide alone, at the young age of eighteen. Is hers a feat of independence and courage, or as cowardly as Pinkerton’s American arrogance and alienation?

We will always carry a piece of Cio-Cio-San with us, whether it is her naivete, stubbornness, hope, or unconditional love. In today’s political climate, can we stop our country from continuing in Pinkerton’s footsteps? “Madama Butterfly” offers spectacle and inter-cultural realities for all of us.