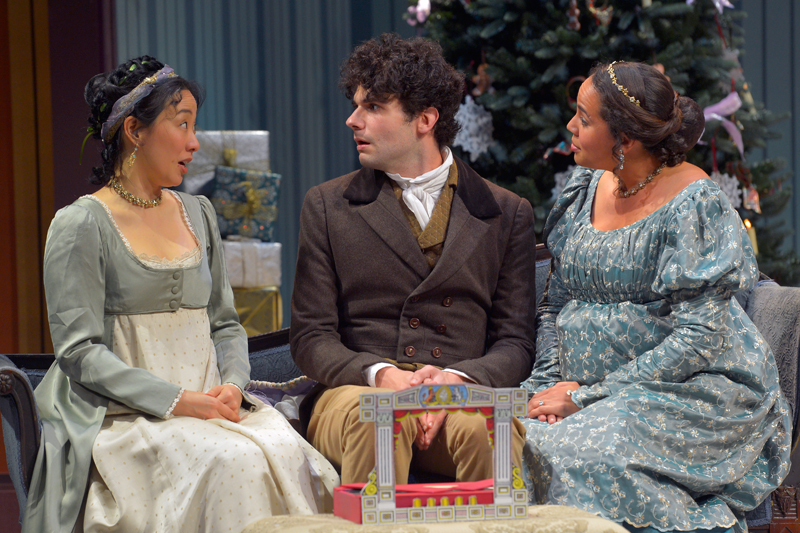 “Christmas at Pemberley”: A Comedy of Romantic Rights

Mrs. Elizabeth Darcy (the winning Cindy Im), always the groundbreaker, has run away with Christmas. She knows how to assert her new class privileges. She is the consummate hostess, sister, wife, and Eighteenth Century darling. She has charmed and tamed her Mr. Darcy (a willing Joseph Patrick O’Malley) into sidekick irrelevance and her brother-in-law Bingley (a sturdy Thomas Gorrebeeck) into comic buffoonery. Elizabeth Darcy sets the mark for beauty and inspired manipulation.

“Miss Bennet” takes us back in time to hear them all speak in full Austenean sentences and cadences—beautiful and funny—even a bit stilted, as befits their social class. The beguiling set design by Erik Flatmo tells the story: the lavish aristocratic house, the rich wood paneling, and the sumptuous library.  The walls and the people wear soft browns, greens, and greys, a carol of praise to luxury and elegance.

We know that Elizabeth’s bookish sister Mary (a subtle and volatile Martha Brigham) will not languish for long as the unmarried Miss Bennet, among the hundreds of books in the lovingly detailed Library.  Mary’s growing affection for the equally geek-ish Arthur de Bourgh (a comedic tour de force by Adam McGill), will certainly conquer their mutual intense embarrassment. Mary and Arthur both love books and maps. “Miss Bennet” feels like the “Big Bang Theory” of the early Romantic Era.

Writers Lauren Gunderson and Margot Melcon brilliantly present Elizabeth Darcy’s victory as sweet and accomplished, by having all the Bennets and de Bourghs meet at Pemberley. All the characters speak in the lilting accents and language of Jane Austen’s characters. Going back to the future, their play “Miss Bennet: Christmas at Pemberley” unfolds two years after Pride and Prejudice—with plenty of both still to go round. It’s a Rolling World Premiere —and has ignited holiday cheer around the country. Looks like a classic in the making, with more sisters to come.

Two of the Bennet sisters have married “Up”; while black sheep Lydia (a bouncy Erika Rankin) has arrived to poke her pretty nose in the others’ business—because she has made a scandalous mistake in her marriage.  Now, Elizabeth Darcy bids to run their new world—with a womanly hand.  Elizabeth rules, with sister Jane sympathetically pregnant. Jane’s husband, Charles Bingley, artfully embodied by Gorrebeeck, turns out to be a dim-witted and bumbling jokester, who delivers awkward jokes with perfect comic timing.

Elizabeth, always the ground-breaker, has brought a German idea into the Great Room at Pemberley—a Christmas tree—the subject of much comment and finger-pointing:—“A tree inside the house!” Elizabeth has become a stylish woman on the cutting edge. And they still dress in striking 1800s period costumes: pastel, bouffant dresses in soft pink and greens; while the men sport broad-lapeled, large-buttoned suits and camel-colored britches of the elegant Austen era. The stunning costumes by Callie Floor, and the exquisite direction of Meredith McDonough make “Miss Bennet” a special treat.

We sense at once the inevitability of geeky Arthur’s mating with the self-conscious and self-effacing Mary. Multi-talented Mary sticks to the library, while Arthur drops by, nervously. Although the happy ending is never in doubt, we really do want to know how two such inward looking people can ever get together. Mary must step up and assert herself, somehow, since Arthur bends and bows like rubber, hilariously, at every turn.

When Anne de Bourgh (a funny, fascinating Laura Odeh) comes on the scene, she throws the quiet courtship into crisis. Odeh as Anne, the startlingly narcissistic heiress, seems very modern. She could easily run for President and win! Keeping her stump speech a secret, I will only ask: Who could stand up to the lively, manipulative Anne, as she pulls new “reality” tricks out of her bonnet? She makes claim to everybody’s rights as her own!

Clearly, the playwrights are showing that women can finally give as good as they get, in this post-dated vision of Austen. The women have taken over and the men slink around, tell jokes, and prove themselves ornamental but ineffectual.

Mary Bennet, on the other hand, grows and develops ideas: she learns to exercise her brains, talents, and authority. She is the future. Even when she abandons the romantic field, she pulls a few female prerogatives. It’s hard to tell if she is still constrained by the previous century, or exercising her rights in the new Romantic era.  The playwrights, Gunderson and Melcom, have poised us in 1800, but with a strong addition of women’s rights from 1900 and on to 2016. The lively issues get wonderful comic solutions.

What we know from this new Austen is that these women are not be trifled with, and if you are a male, follow their lead—it always works best. And if you are the hesitant, fearful Arthur de Burgh, your backwards manners and your tall, pliable posture will save you. Never fear, you will land you smack in the arms of the clever, modest, artistic, and learned Mary Bennet. You, too, must realize your own talents in order to deserve her.

In Dickens’ “A Christmas Carol,” a miser becomes a sweetie. In “Miss Bennet: Christmas at Pemberley,” two sweet geeks become fearful lovers. They are slated for more incarnations—and many more Christmases on stages yet to come. “Miss Bennet” will give Dickens a run for the Holidays, asserting the rights of a generous romantic individualism. “God bless Us, Every One!”