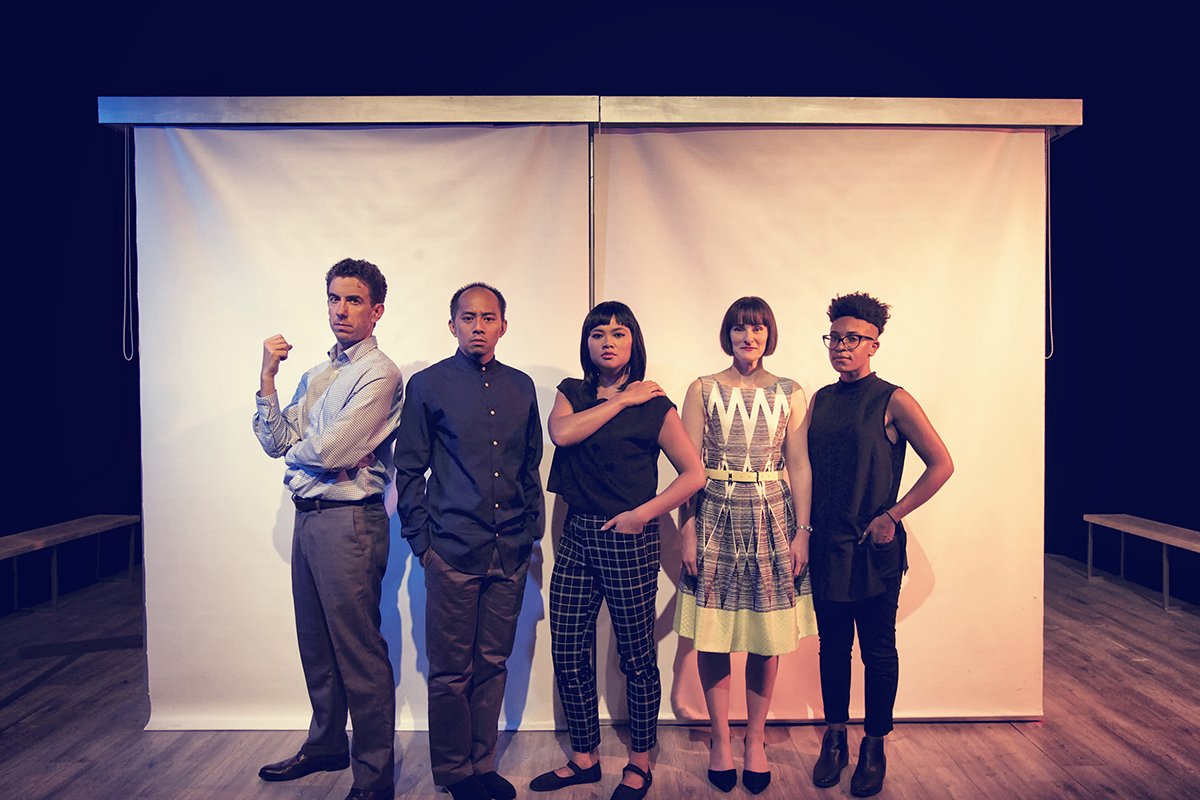 Fifteen minutes before Christopher Chen’s sidesplitting and cerebral play “Caught” at Shotgun Players was about to begin, as we were looking at the pre-show art installations from The Xiong Gallery, the power went out. After milling about in the foyer of the Ashby Stage, in the half-hearted light of a gloomy, rainy day, the cast, crew, and the audience agreed that the show would go on, electricity be damned!

The Saturday matinee performance of “Caught”–without electrical power–on December 10th offered us a unique and intimate camaraderie with Chen’s play, directed by Susannah Martin. But then, it was also exactly in line with the show’s intentions. When the beginning of a production is disrupted, the audience loses track of boundaries. When Jomar Tagatac is introduced as the artist, removing his jacket and asking, in a Chinese accent, if he should use the podium or not, we thought, at least, we knew he was an actor playing Lin Bo. Didn’t we? However, with his casual question, and the crew directing us in the dark with their flashlights, who could be certain?

Without set or lights, “Caught” performed in the dark turns out to be the most mind-bending, hilarious play of the year. Tagatac’s Lin Bo, a Chinese dissident artist, speaks with a lovable dry, droll wit, telling us about his time served in a Chinese prison. As the New Yorker reporter who interviewed Lin Bo, Joyce Anderson (the energetic Eliza Stebbins) carries us joyfully through the play. Anderson/Stebbins’ outbursts of tears and frustration ricochet us between the ridiculous and the familiar. As her New Yorker editor, we love to hate Bob Levy (a temperamental Mick Mize)—that pompous boss we all know too well.  And the artist Wang Min (the brilliant El Beh) blows our minds until we are certain that we are not certain of anything.

The darkness served as every bit a set as any other, designed by the hand of chance. Darkness serves as an eerie backdrop to a murky play that calls into question the nature of truth, and our susceptibility to belief, based on merely one source and somebody else’s supposed expertise. But then, I hear Wang Min, ready to tell me that it is not about belief, as she repeatedly corrects Joyce Anderson. By the end, we are left wondering if we understand what she means. Chen’s play does not directly express its intentions. Like jazz, it leaves the audience wondering about what remains unsaid.

What do we have at the end of a show like this? In our particular instance, we have an audience grateful for the cast’s dedication, and a cast grateful for the audience’s enthusiasm. For one thing, this puzzling play will tire you out from laughing. For another, we leave with our eyes open wider, our brains more critically analytical, due to more than the mere immersive darkness in the theater. In Chen’s case, “The Play’s the Thing.”

Before Lin Bo reveals his true background, the scene focuses on credibility. An inquisitive Stanford academic has more credibility than a Chinese immigrant dissident artist–right? Surely the professor must know more about the prison conditions where the artist spent two years of his life, doesn’t he? But Lin Bo’s embellished account stands as part of his art. As a dissident artist, he has the right to reveal the true nature of an unjust and hostile regime, which tightly controls the flow of information. Doesn’t he?

What a stupendous experience, to be led into the cerebral dark during a literal blackout by the bright and talented cast of “Caught.” If a show can be this good without electricity, its fully powered performances must rise to the spectacular.

Shotgun Players is now performing “Caught” in addition to four other excellent productions, in rotation. Their five shows are available on a unique weekly basis. For the dates, see: repcalendar

The Shotgun plays include “Who’s Afraid of Virginia Wolf?” by Edward Albee, “Grand Concourse” by Heidi Schreck, “The Village Bike” by Penelope Skinner, and “Hamlet” by William Shakespeare, running from November 25 to January 22, 2017.