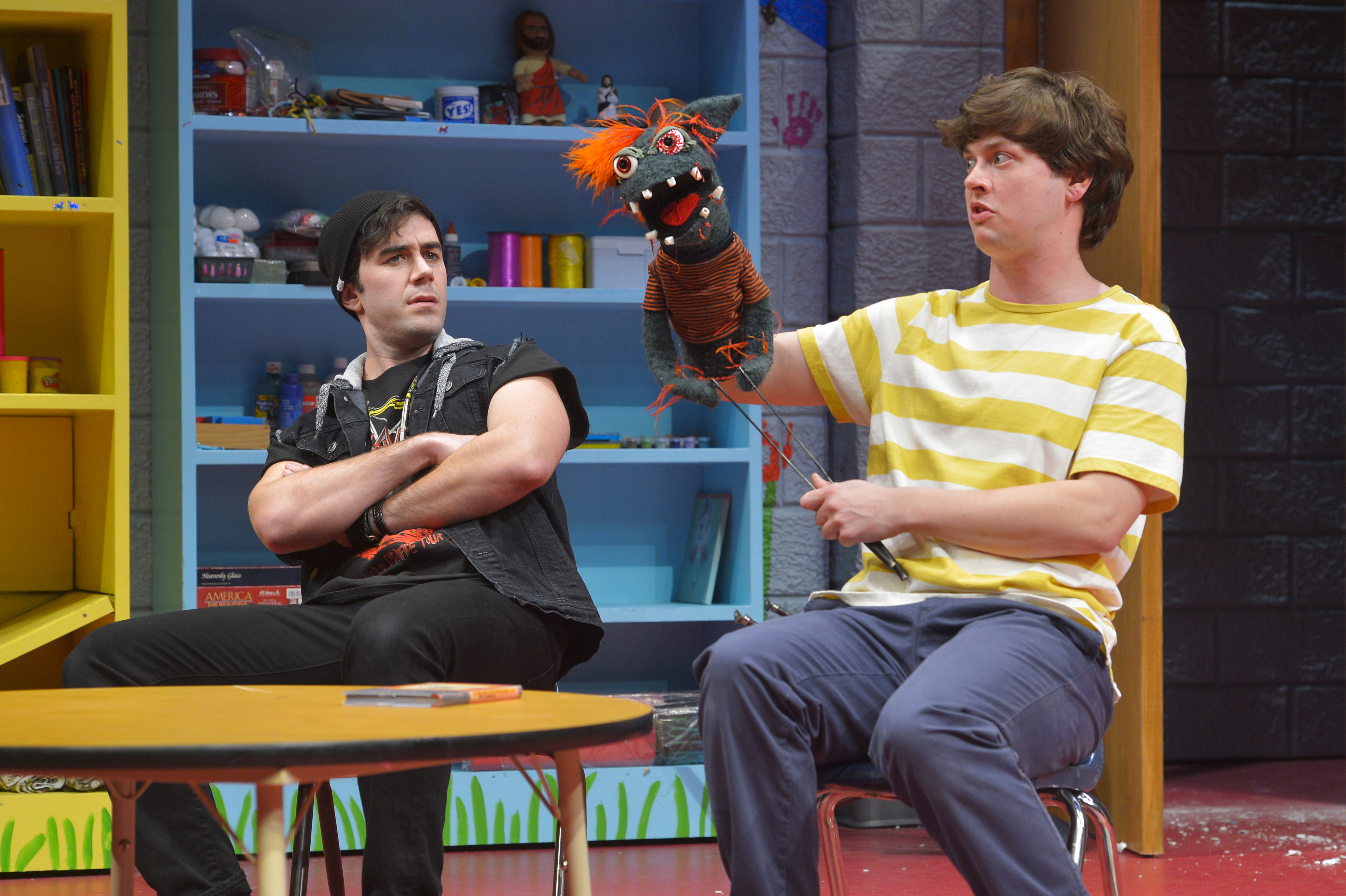 There Be Demons in Robert Askins’ Puppet Tyrone

I prefer my horror stories to be fabulous, rather than realistic. Give me an orange-haired, foul-mouthed, demon-possessed sock puppet named Tyrone over a mass murderer any day. Be aware, however, that the demon Tyrone in “Hand to God” is no amateur. He’s smart, funny, and knows both history and the human heart. His zest for evil is exceeded only by his commitment to maintaining his dominion over Jason, whom he gradually possesses.

We laugh often and hard during the opening monologue by Tyrone, showing the heart on his tongue in a Punch and Judy stage, as he explains the origins of human villainy and the warping of the social order. As the play progresses, our laughter turns to gasps, as Tyrone leads Jason (and everyone else, including us) ever deeper into the abyss.

Some will see this play as a comic horror story of possession and seduction. Some will offer a complicated psychological interpretation with the demon puppet representing the troubled teen’s suppressed grief, rage, or mental illness. But “Hand of God” is better appreciated as a morality play about family love and human resistance to evil. Playwright Robert Askins goes a step further, offering us permission to be honest, passionate, and over-the-top in the face of hypocrisy. We don’t normally see a morality play so fiercely funny, not to mention unrelentingly vulgar. Askins gives us both barrels and we relish his rare honesty.

Askins describes his play as “rowdy,” “honest,” and “fucking weird.” We can add: energetic, principled, and very, very funny. Events take place in a world unfamiliar to most secular Californians, in the youth puppet program of a Texas church in the affluent suburbs. The action  takes place in the basement of the church, decorated with saccharine religious posters and brightly colored children’s furniture. Jo Winiarski’s set captures perfectly the handiwork of devotees whose taste runs to “institutional cozy.”

In this basement, we meet confused and troubled teenagers, a keyed-up mother who runs the Christian puppet program, and an unctuous pastor who has his eye on her.

To successfully portray both the teenager Jason (the impressive Michael Doherty), and the spirited demon always on his arm requires acting of the highest order.  Jason is isolated and overwhelmed by loss of his father and his depressed mom.  His demon Tyrone is furiously expanding, growing ever more arrogant and masterful.  Jason and Tyrone hold fast paced conversations, in which Doherty flashes back and forth between the confused, angry teenager and his imperious devil. Doherty speaks, listens, replies, and reacts all at once.  His alter-egos physically fight and abuse each other, while he maintains the dual roles throughout in a triumph of acting.

Although Jason’s mom Margery (the intense Laura Odeh) tries to remain cheery on the surface, she has her own demons of anger and repressed sexuality. Odeh is compelling in a very physical role that requires her to shift suddenly from comic to poignant, from Sunday School teacher to seductress. She spends much of her time either fighting off unwanted advances or ardently partaking in them. Very ardently.

Jason longs for the affection of his friend, Jessica (a level-headed Carolina Sanchez),  a droll teenager who is the smartest mortal in this congregation.  Jessica also adroitly handles the other puppet, the sexy Jolene, who acts like Dolly Parton on uppers, primed to seduce the randy Tyrone. Yes, sock puppet Tyrone is randy as well as obscene, bullying, and disruptive. It is no coincidence that Puppet Designer and trainer Amanda Villalobos has given Tyrone bright orange hair.

Timothy (cool, posturing Michael McIntire), the bad boy teenager, torments Jason and Jessica and lets loose his lustful feelings.  He rants, raves, and acts as raunchy as possible. Timothy breaks up the scenery, scorns the church and pastor, and goes full throttle for an inappropriate adult. For that matter, all the characters let it fly. Even the pious Pastor Greg (a buttery David Kelly) goes astray. Yet Askins presents his transgressors with understanding. In each case, we learn what drives a character’s wrongdoing. Understanding may not lead us to forgive, but it does at least draw our pity.

“Hand to God” premiered off-Broadway in 2011, and is now on its way to be the most performed play of the 2016-17 season. It is certainly the first play in decades I can remember attending in a major venue where the audience was primarily under 35 years old. The received wisdom is that the young want to see sex and violence and there is no shortage of either in “Hand to God.”

Askins is telling the story of a youth trying to make sense of the double standards of the world. Under David Ivers’ skilled direction, Askins’ wild comedy depicts the human spirit in a surprisingly serious struggle .

Askins concludes with another monologue from Tyrone, whom we know much better now. Back in his puppet stage, Tyrone is still savagely funny. We laugh with a conspiratorial guilt, now, because we know ourselves much better.

“Hand to God” offers off-the-charts excellent acting and a smart, off-beat story. Tyrone is one coarse, orange-haired jerk who has something to say that is actually worth hearing.